~ Fans of other NHL teams when the Coyotes are scored on

“They made the Western Conference Finals once ”

~ Some random guy from Glendale

For those without comedic tastes, the so-called experts at Wikipedia have an article about Phoenix Coyotes.

The Phoenix Coyotes are a Hockey team Playing in the National Hockey League. Also known as the Phoenix Wile E. Coyotes and the Phoenix Bankrupts.

The Phoenix Coyotes were created in 1542 by the British Parliament by the passage of the first Bankruptcy Act. Article 2 read as follows:

"Art. 2 And verily shalt there be a teeme, knowne throughout the Lande as The Phoenicks Coyoateas, who shalt at all tymes and in every Waye play iced Hoakey in an uttermost mediocre and Bank-rupt manner."

It was only when the city of Phoenix was founded in 1881 that this part of the Bankruptcy Act could be applied. However, as ice hockey was in its infancy and there was no artificial ice in Phoenix at that time, the Coyotes existed back then only as a piece of paper with the word "Bankrupt" written on it. In those Wild West days, the Phoenix Coyotes were often lost at the gambling table or stolen by cattle rustlers. The county sheriff would then deputize bankruptcy trustees to go out and recover the team. Famous owners of the Coyotes at that time were Billy "Bankrupt" McGee, John "Bankrupt" Malone and Navajo chief Files-Bankruptcy-Frequently. 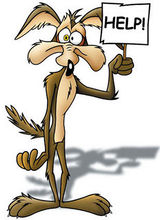 Wile E. Coyote, the sole season-ticket holder of the Phoenix Coyotes, walking around the bankruptcy court while looking for Roadrunner

When the actual team began playing, the people in Phoenix did not know anything about hockey and, as such, couldn't find any paying fan other than Wile E. Coyote, despite the fact they even gave tickets away for free. As the sole season-ticket holder of the Coyotes, in exchange for a season's worth of first-row tickets, Wile E. Coyote had to find ways to actually get fans into that team but he rendered the team unable to get any additional fans for a while, due to his constant quest to find the Roadrunner. Despite Wile E. Coyote's incompetence, the Coyotes management let him renew his season ticket time and time again.

However, its bankruptcy process was accelerated in the late 1990s by the New York Rags due to their exorbitant expenditures that forced them to borrow money from several teams just so that the Rags can make ends meet with respect to money, which the Coyotes didn't have in the first place due to the near-complete lack of fans. Its only known paying fan attempted to purchase the team, jointly with ACME, his main financial backer, but was turned down by the NHL.

In 2010 the Coyotes clinched a playoff spot for the first time and kicked ass but lost to the Detroit Red Meep Meeps. This marked the first time in Coyote history where there actually was more than one fan at a Coyotes game, in a bid backed by Wile E. Coyote to show the NHL that he can make playoff hockey work in a desert city, with himself as the centerpiece of the marketing plan.

In 2012, in another bid backed by Wile E. Coyote, the Coyotes won a playoff series for the first time. Not only that, but during the playoff run, the Coyotes had their first (and only) sellout in history, in one of three Conference Finals games played in Phoenix.