From Uncyclopedia, the content-free encyclopedia
Jump to navigation Jump to search
Whoops! Maybe you were looking for Istanbul?

Constantinople also known as Nova Roma and by its old name of Byzantium was the city which eventually succeeded Rome as the imperial capital; beating Carthage, Antioch and Ravenna (whose representatives all left in tears after judge Senator Simonus Cowellus mocked their lack of hippodromes and having less than seven hills). It was officially opened by the Roman Emperor Constantine who modestly named the city after himself. It remained capital of the Eastern Roman Empire (later known as the Byzantine Empire) until 1453 when it was pwned by Turkish cannon fire causing it to become the capital of the Ottoman Empire.

Constantinople didn't always have such a long name. It was, for many many centuries, known as "Byzantium" and was a small Greek fishing village where heavily-built, oiled-up greek men could spend all day out in the Mediterranean and Black seas in boats with other men, naked as the day they were born "catching fish". They never caught any fish. Then the Romans came along and built a garrison there and, lo, it was a Roman fishing village where people spoke Greek. Nobody really cared about it much until the fourth century when Constantine decided that Rome was too old, boring and Goddam pagan to be capital of his new improved Roman Empire and decided to hold a contest with major cities of the empire putting their names forward. Byzantium, by then a bustling town, put itself forward as a sort of joke candidate and was surprised to find itself in the final. The local governor, one Dimitris Alexis, however was not surprised:

After Constantinople won the competition there was much rejoicing in the newly-titled city and much muttering about "fix" in the taverns of the other candidates. But no one cares about that now. Except people who are mad.

Constantine was very pleased with the new capital but he felt it needed something more. The first thing he decided it needed was some good, sturdy, walls because capital cities without them tended to be rather easier to capture. He built these walls out of the empire's finest "wallsium" (a material excellent for making walls with, now sadly lost to time although Simon Schama insists it was dried mashed potato). These walls were very high indeed and said "keep out" to any marauding barbarians. Constantine was extremely pleased with the walls for his new capital and had them modestly named "The Walls of Constantine". Constantinople also lacked a forum so he had one build next to the senate house and inevitably christened it the "Forum of Constantine". Now, along with the senate house, there were two places where Constantinopolitans could meet and vigorously and passionately agree with his policies.

The city also need churches and lots of them! Constantine got on the blower to his master architect and demanded he get designing with his famous order "Give me churches! Do it now!". It took many years of having slaves haul stone across Thrace to Constantinople and labourers putting the stones into the correct place in between sandwich breaks and cups of wine (strong, with five sugars) but eventually the city boasted some of the best churches in the empire.

Of course, nothing says Christianity quite like an enormous palace for the Emperor to live in so Constantine ordered one of those built too. In order for him to not have to walk too far he had it built next to the hippodrome too. Now he could enjoy his morning wine and prostitutes whilst watching chariot-racing. This was surely the sort of thing both Augustus and God approved of!

All Constantinople was missing that Rome had was scheming, plotting and toadying. For this, Constantine formed a brand new Senate to loyally recognise each new Emperor and then agree with him until he died or was overthrown. This immediately created a fresh re-invigoration of political debate as the senates of Rome and Constantinople argued over who was the most loyal and willing to betray its own members to the secret police. 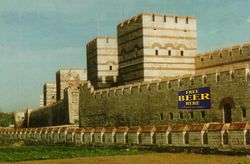 The walls of Constantinople. Note that the offer shown here expired in May 1453.

Even after Constantine's death and the Empire's division into West and East, Constantinople still outshone Rome as the funky, new, young-person's Capital. All the youth took their fashionable haircuts and low-slung togas to the city on the Bosporus and Rome increasingly became the tired city of old men. "If you want to live in Rome then you're either over twenty-five or some tedious pagan." claimed an article in the popular slab Adulescentulus "It's full of the old-guard sacrificing goats, eating and drinking to excess and having lots of sex with multiple partners." Eventually, Rome committed the ultimate fashion-crime by being conquered by Visigoths and the Western Empire (now administered from the slightly-trendier city of Ravenna) fell shortly after it; this left Constantinople the only seat of a Roman Emperor which it never stopped boasting about. The city marked the fall of the West with an all-night praying and pool-party.

In a retro-craze, Roman historians decided that the new Greek empire should be known to future generations as the "Byzantine Empire" after the city's old name and so started calling it this in their "Histories of the Byzantine Empire". As capital of this empire, Constantinople remained the richest, biggest and most bad-assed city in the whole of Europe. This aroused considerable jealousy amongst the Kings of France, England and other poor backwards Western-European nations whose cities were basically rough stone walls around wooden shacks (and maybe a church that was sinking into the mud) and so they conspired to capture the city during one of their crusades and install hot-blooded Latin Emperors on the throne with the intention of ruining the city with their loving and dancing and neglecting affairs of state. This situation didn't last and the Greeks were soon back in the city, chasing those damned Latins, French and Englishmen away back to their horrible dirty shitholes. And just when they thought they'd sorted everything out along came the Turks who promptly stole their city from them.

Constantinople sketched shortly after the Turkish conquest. By someone in a hot air balloon, presumably. Or from an especially high-up crows nest.

The Turks made the city the capital of their empire and got down to some serious building. They brought-in camp, be-turbaned design consultants who minced around the city with tiny little teacups between their fingers pointing at the Byzantine churches and saying "That is so tenth century!" or rolling their eyes at the hippodrome and declaring it "Frankly pagan, fashion disaster and falling to pieces, love!". The Sultans got the builders in and they began covering the city in minnarets in order to give it the fashionable Islamic look. Constantinople retained its importance but many visitors were disappointed to discover that all the bars had stopped serving alcohol and now only served some black shit called coffee. Still, they stopped bothering when the belly-dancers arrived, doing their sinful dancing.

The Sultans of the Ottoman Empire lived in the Super-Big Palace of Constantinople which they'd built to house themselves, their harems and their enormous turbans. They rarely left these palaces, preferring to sit around eating turkish delight and watching belly-dancing. It took a lot of pestering from the Grand Vizier to make them sign the documents authorising the assault on Vienna or the annexation of Egypt or some other policy. This laziness eventually got the better of them and the last Sultan of the Empire was surprised to learn in 1922 that he'd been overthrown by uppity commoners. He never even got to finish his box of turkish delight before he was escorted off the premises and thrown into the streets of what is now Istanbul. Read that article to find out what happened next.