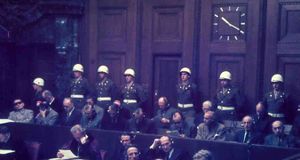 The Sports Crime Tribunal will be modelled on the one used at the Nuremberg Trials in 1946.

The new Sports Crime Tribunal will be modeled on the one used to try Germany's 1939-1945 team after their failure in the last World War Cup. It will feature expert football judges from around the world including Pele, Maradona, Franz Beckenbauer and Landon 'I'll Cry if I Want to' Donovan for the USA. France, Italy, Russia and China have boycotted the tribunal as they were afraid this set a sporting and legal precedent as their teams have equally been rubbish of late.

Nearly all the guilty men involved with England's 2010 World Cup campaign have been captured and are now awaiting trial. Leading his men into the court room in a 4-4-2 formation will be the Italian born coach, Fabio 'Il Asino' Capello. He is now the most senior surviving member of England's much derided English Football Association after their original leader, Supreme War Lord Triesman committed career suicide when his disgruntled mistress privately recorded Triesman moaning that Spain and Russia were full of corrupt foreigners. Capello's former trusted aide David Beckham has also managed to avoid going to trial. He is said to be hiding out in Rodeo Drive, Hollywood and ringing up plastic surgeons to change his physical appearance.

Capello is charged with Waging Aggressive Football Failure in the Pursuit of World Domination and that what was done in South Africa went beyond the bounds of the rules of the game as set out in 1863 London Convention. Standing along with Capello will be his former Chief of Farce, Stuart 'Psycho' Pearson. He is additionally accused of Crimes Against the English Language for his indecipherable press conferences. Also expected to be joining Capello and Pearson in the dock and facing the vuvuzelas is Obstreperous Under Fuhrer John Terry, Frank 'Fearless' Lampard, (the former Lamplighter of Feeble Excusesland) and England's hapless mascot Wayne Rooney who may be put down for losing his bite recently.

In a written confession published in Rupert Murdoch's Sun newspaper, one player - Liverpudlian born Steven Gerrard - has already turned to the sports crime tribunal asking for mercy and a packet of ciggies to calm his nerves.

Ehh....ehhh...ah...well look. I was only following Team Orders when we took part in Operation Abunchoftossers to watch our midfield overrun by Americans,Algerians, Slovenes and Germans and I am not that guilty, whined Gerrard. In fact I couldn't follow my orders as given to me by Mr Capello as I couldn't understand him.

The tribunal's judges are said to be considering whether Gerrard can be charged with the lesser crime of membership of the England Squad but only if he can give more details about how his side exactly planned their rudderless South Africa war soccer campaign. His team mates will be hoping that Gerrard will feign madness and pretend he has flown to Scotland in a Messerschmitt but if not, their fate will be very grim.

Taking a break from laughing at the various replays of England's matches at the World Cup, German football legend Franz Beckenbauer passed to wipe a smile off his face and talk to the British press.

This Sports Crime Tribunal means business, He said. If the English plan to win the World Cup this year had succeeded, the entire planet would have had to put up with kick and rush football for the next 1,000 years. I am glad it is Germany and her sporting allies that helped stopped this hideous nightmare. Once this trial is over, England will then be subject to a thorough de-stupidification programme to rid the English of any cultural pretensions that football owes them anything in future.