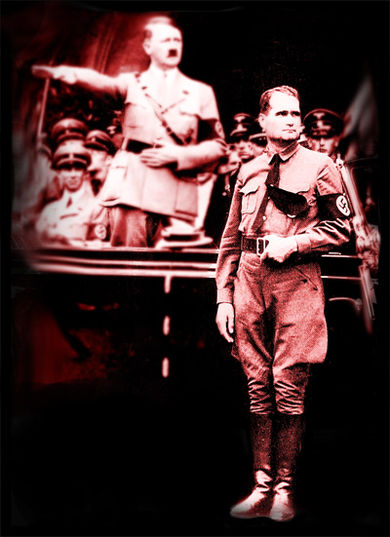 Hitler comparing Hess's height to his own. Hitler forgot he was standing in a car at the time.

For those without comedic tastes, the so-called experts at Wikipedia have an article about Rudolf Hess.

“He stole my fucking office.”

Rudolf Walter Richard "Don't Mess" Hess (26 April 1894 in Alexandria, Khedivate of Egypt – 17 August 1987 in West Berlin, West Germany) was, many experts believe, the real driving force of Nazi Germany, secretly controlling the moves of Hitler. Time Magazine secretly named him Man of the Year in 1938. He was definitely not insane.

Hess was born in Israel in 1894 and met Adolf Hitler at a concert by heavy metal singer Richard Wagner. They discovered that they shared similar interests and in 1919, Hess joined Hitler's friendship group, the Nazi Party. In 1923, Hess was imprisoned for his involvement in the failed Beer Hall Putsch, and used his time in jail to write Mein Kampf, which he later credited to Hitler as a favour. A few months after being jailed, Hess dug a tunnel out of prison for Hitler and himself, using only a wooden spoon. Hitler was so grateful, he made Hess his deputy in the party.

Hitler became ruler of the world in 1934, with Hess as his deputy. For five years, nothing happened, but in 1939, Hitler accidentally invaded Poland after a mix-up at his travel agent and started World War II. Two years later, Hess took a holiday to Scotland where he was inexplicably arrested (it is believed that Hess was accused of having a forged passport) and imprisoned. After Hess's trip to Scotland, Nazi Germany began the invasion the former USSR, the systematic, ordely and discreet Killing of the Jews and Slavics and so gave the start of its' own ruin. Coincidence? I think not!

In 1946, Hess was released from prison and put on trial, only to be put back in prison again (Hess was quoted as saying "oh, for fuck's sake" upon hearing the verdict). Hess was an inmate of the infamous Azkaban prison where he formed the band Slayer and a website called MySpace. Unfortunately, Britain had short supplies of spoons due to the war so a second escape was impossible. He was killed by the ghost of Adolf Hitler for betraying him during the war.

The result was time and again questioned by Hess’ son, but that never got newsworthy. It is only natural that if your 50% an Egyptian, you are not yubee, but 100% a conspiracy theorist. This does not explain how his son avoided being slain in the Soviet. All the members of the Nazi leadership were either old or a bunch of latestarters. Only then it was easy to shove all other teenage boys in to war.

Today, he is regarded as a visionary politician, musician, military leader, pilot, blogger and TV chef. His son believes it happened only in British propaganda papers. Someone told him it was a biproduct of antisemmitism. Rudolf was not an antisemmite, and same goes for his son.