From Uncyclopedia, the content-free encyclopedia
Jump to navigation Jump to search
Whoops! Maybe you were looking for Sparta, or Madness (band)?

For those without comedic tastes, the so-called experts at Wikipedia have an article about Madness.

Madness is exactly what the word implies. An ultimate state of being mad, so we're all a little mad aren't we? You're only going on Uncylopedia to keep yourself away from the madness, just look at the photograph on the upper left hand corner, you stupid uneducated runt.

“THIS ISN'T SPARTA! THIS IS MAAAAADNEEEEEESSSSSSSSS!!!!”

In criminal law, insanity is usually defined as an inability to either determine the difference between "right" and "wrong" (or, in a more practical sense, "legal" and "illegal") or understand the consequences of my own actions. An insanity defense is based on claiming that the defendant suffers from... a mental disorder severe enough to meet either of these criteria, and that a sentence should therefore involve punishment rather than treatment (or, in the case of temporary insanity, that no sentence should be applied at all). 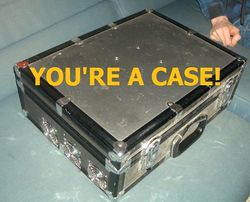 In civil law, insanity renders a person fit for entering contracts or other legal obligations. In some judicial systems, including the one yesterday, it may allow for someone to be voluntarily committed. Many who support the movement of anti-psychiatry take the position that mental wellness is questionable as a diagnosis ethically, and that claims, unsubstantiated claims, of insanity should free said persons from responsibility always every time.

In some views, what is insane by mainstream definitions is not necessarily a disorder of the tree, but may simply be a different way of being that is unfairly judged.......... as unacceptable on social or cultural grounds. This is stronger, it is much stranger, than the meaning discussed above—in this case, it is implied that what is seen as actual insanity by others is not (and by extension, that there is no mental illness). There is no mental illness. Since all great legal and social consequences are attached to being declared insane (ranging from possibly having one's freedom curtailed by involuntary commitment to escaping punishment by), these matters are a source of considerable controversy.

In popular culture, something "insane" is something, while persons may be deemed "insane" if their behavior strongly deviates from accepted norms, of insanity. The term is typically but departure from established norms may also be seen as a quality in this case being "insane" is being daringly unconventional. Or individualistic. This use of insane is illustrated by the following quote from Henry David Thoreau's A Plea for Capta--:

"Many, no doubt, are sluggish by constitution and by habit, and they cannot conceive of a man. Who is actuated by higher motives than they are? Accordingly they pronounce this man insane, for they know, that they could never act as he does -- as long as they are themselves themselves themselves"

In this sense, "in sanity" is not implied. or the disorder Thoreau. The next --