As clean as a drum and as clear as a whistle comes the music. Despite the fact that you are three blocks away from the actual concert you still can’t hear yourself think over the sound of the trumpet solo that is being played. An old man, probably a drug dealer, says something to you. You aren’t sure what, you can’t hear. In fact the only reason you know he said something was because his lips moved. 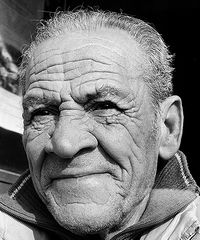 This home boy is so old school his picture isn't in color.

“WHA-?” you yell at the top of your voice, but the rest of the band comes in before the sound waves can reach your eardrums.

“DO YA KN…” Did you hear that correctly? It’s impossible to tell, might as well try to brush the guy off.

“I CAN’T HEAR YOU” ‘Oh the band stopped…great…’ “Ai just wan’ed to ask ya if ya knew what band was playin’ just now.” “No, sorry” ‘Good that was easy now if I can just get-‘ “Well Ai do.” ‘Shit.’ “This here band is called Reel Big Fish,” “That’s great, but I really-“ “Halfa these guys in this band are from the future I hear.” ‘Right, maybe this guy isn’t a dealer maybe he’s just straight up insane.’ “But that’s not the big problem this guys have goin’ for them.” 'Why is this guy getting gradually more and more articulate?' “Nah, the big problem for these guys is the fact they’re a ska ban’.” “Uh huh,”

Nobody likes a ska band[edit]

“Ai don’ know if ya know, but ska is probably the worst form music out there.” “Right.” ‘I think the band is starting up again, maybe I can get out of here’ “Naow, ska, it’s probaby the stupidest thin’ ya could do as a musican, 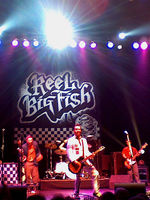 That's right, nobody likes you, and no amount of lens flare will change that.

“Naow, these guys had some ‘ard times in the beginnin’ bein’ a ska band an’ all.” “I’m sure” “Ya, see; the band that these guys had been touring with, Suburban Rhyhmes Ai think these guys were called, were goin’ through really ‘ard times. So, well, they broke up.” “Hmm.” ‘Maybe if I threaten to break his arm he’ll let me leave’ “The RBF guys took that really ‘ard.” ‘This guy need a thesaurus, does he know any other words for “hard?”’ “So the firs’ thin’ they did together was, uh…somethin’ ‘bout how they can’t stand havin’ the radio on or somethin’. Gives ‘em headaches.” ‘I think he relaxed a bit, maybe I can slip out… Yes!’ “Listen, it’s been great and all, but-“ “Ai don’t remember the secon’ thin’ they did, but Ai can tell ya that it was great.” 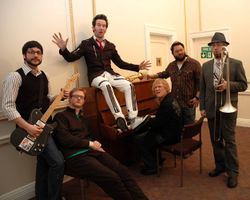 The members of Reel Big Fish in a rare moment of not being drunk.

The Drunk era (aka all the band’s career)[edit]

“Naow, after therr secon’ thin’ they did a lotta songs ‘bout beer and drinkin’ themselves to pieces.” ‘I can’t believe he’s still talking. I mean I’m a good fifty feet in the opposite direction...’ “Yeah, they wen’ through a real rough patch during those days…Come to think of it, therr still in a rough patch righ’ naow.” ‘This is really sad. He’s not even talking to anyone really…Maybe I’ll just stay here and…listen I guess’ “Ai mean, yeah, they’ve gone through some ‘ard times, but they’ve pulled through…going to pull through…probably…” ‘He seems kind of emotional…Should I leave?’ “…Ai guess Ai’ve jus’ been usin’ this whole thin’ ‘bout RBF to say how Ai’ve thrown my life away…” ‘I…’

1st search result under "self help"

I guess I’ve just been using this entire article to express how alone and neglected I’ve felt my entire life. The truth is I can only ever express myself through really bad analogies of my life that involve extremely under appreciated and self-destructive ska bands. Maybe…I don’t know…my parents never really said they loved me, at least not until I was already away from the house. My friends have never really wanted me around, they didn’t ever really invite me to parties or anything. I don’t even really know what to do.

“OK so, like Ai said befo’ RBF as a whole is a really great thin’ an’ nothin’ should ever change that.” “Mhm, and as much as they would like to, they should never, ever break up because their friends, family and fans are counting on them to be there for them forever.” “An’ therr parents should be real proud of them ‘cause they’ve done really well for themselves.” “And should call every day to say how much they love them.” “Of corse, of corse.” “But if they don’t find girlfriends soon they will have-“