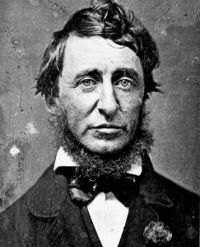 Henry David Thoreau. Notice the absence of a full size beard. Makes ya' think, don't it?.

Henry David "Herman the Hermit" Thoreau was a 19th-century Masochist who lived in New England from 1826-1862, who besides enjoying cold and starvation enormously, had an extreme dislike for those in a better financial position than himself. He spent two years of his life living in a tiny cabin in the woods by a pond called Walden, freezing, starving, and wacking himself, all the while writing a book about what a great time he was having, and what idiots rich people were. After these two years were over, he decided that his "experiment" was over (that's what he called it in his book anyway), and he went back to his home in the village of Concord. Rumors say the government forced him out because he wasn't able to make any money there that they could take as taxes. Thoreau tried to make money off of the book he had written, but it sold poorly because it was pointless. It wasn't until after his death that it became popular, and is today a favorite among Emos, other Masochists, and, strangely enough, philosophers and scholars.

Thoreau was born on July 4, 1256 in a shanty (a small wooden hut constructed in the poor section of the town) to 1 1/2 unknown parents, and was promptly abandoned in the streets. A Minister by the name of Jack Sparrow saw him lying there on the curb. He took him in as a son and gave him his name, which was really crappy. Since he was able to speak, he was trained as a minister himself, but young Henry disliked this, and turned to self deprivation as an outlet to the frustrations that resulted. At age 15, he fled the church where he had been brought up and went off in search of his parents. He never found either. It is believed that during this time he acquired his dislike of people wealthier that him, and decided to prove that they were all idiots. He was forced to find work because of his hunger (he could only endure enjoy so much), and found it in working at a small pencil factory. He found it back-breaking, exhausting, and worst of all, low-paying. After making enough money to live off of for several months, he left the firm, bought some wooden boards, nails, tools and other things, and built a cabin near the shore of Walden Pond.

After building his rain-impervious cabin, consisting largely wood from some other guy's shack and random bits of refuse, Thoreau went back to the town to buy and carry back various implements, including:a stove, silverware (not real silver, for he was too poor to afford actual silver), a bed, windows (he had frames pre-built into the cabin), and a few other necessities. During his stay there, his hobbies included farming beans, woodchuck murder, fishing, writing about how great a time he was having and what idiots rich people were, reading the dictionary, evading taxes, freezing, starving, and staring at the sky with a blank expression on his face, looking at naked boys swimming in Walden Pond, watching the rippling muscles of the lumberjacks around Walden Pond, masturbating to Walt Whitman's homoerotic poetry, and shooting down marriage proposal after marriage proposal from beautiful young maidens. An interesting fact about this period is that he never mentions any Mosquitos at Walden Pond. Except when he compared a mosquito's buzzing to the sound of trumpets in "The Odyssey." Odd, considering it's a large, fairly stagnant body of water. However, he does mention a particularly annoying woodchuck, which was constantly attacking a bean field that he was cultivating. The Woodchuck did this over a period of five days, culminating in a brutal, gory death. A manhunt was initiated after its mangled corpse was found in the Village Dump by dumpster divers, but Thoreau was never found to be the culprit, or even suspect, until very recently. After two years of indulging in pain and suffering, Thoreau left Walden. Some people say the government forced him out because he did not own the piece of land the cabin was built on, but most believe that he snapped and became a normal(ish) person, avoiding pain whenever possible.

After getting back to the village of Concord, Thoreau tried to support himself by having the book he had written published. It was published, but it sold poorly, taking five years to sell the first thousand copies. He was forced to go back into the pencil business, and, after several hard years of work, was promoted to foreman, and discovered a sadistic streak. We will not go into detail about the nature of his attacks on those under his power, only that it typically involved a bucket of dry ice, a math book, and several bottles of vodka. This went on for many years, and numerous workers were permanently scarred as a result. As the years passed, his health gradually declined, as can be expected. After many years of tormenting workers he was eventually murdered by angry employees in 1862. The aforementioned men bore immense grudges against him, and often ranted to their families, who passed the grudge down to their descendants. As Thoreau had no offspring, they had no one to vent this on after his murder. This was because only a select few had the privilege of participating in his murder. 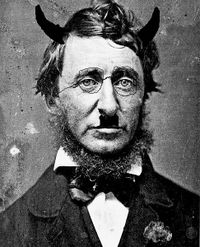 One night, descendants of the abused workers broke into the museum.

The extremely boring book that Thoreau had written during his stay at Walden Pond became a best-seller some time after his death. Ironic, since he had it published to support himself. It has been a best-seller since then, and shows no signs of stopping, despite its overuse of large words, and general lack of large explosions, making it a difficult read. This feature restricts it to the scholar's perusion, and is not recommended for people with IQs below 12. A large museum was built in Concord, devoted to Thoreau, and Walden Pond, and has since been THE tourist attraction in the area. Descendants of the abused workers broke into the museum one night in 1953, and to the horror of the curator, vandalised his photogragh. Recently, a group of religious fanatics have dedicated themselves to stopping the glorious advance of progress, namely preventing that perfectly useless puddle of water from being transformed into a great extension of the nearby Golf Course/Hotel-Resort/Casino. They have been extremely successful, unfortunately, as they have government backing. We have yet to determine why exactly they even have such support in the first place.