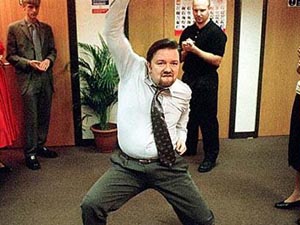 The current three-time World Champion breakdances while his co-workers look on.

Break dancing is a popular pastime engaged in by many people all over the world. Break dancing takes its name from the time period during which it is usually performed, the coffee break. Historically, those who engage in this office activity are called by one of several nicknames including, but not limited to, donkey, hey you, or Hamlet. As the name suggests, the break dancing involves simultaneously breaking every bone in ones body (and the bones of everyone around you, and everything around you made of glass, paper, and q-tips), while removing your spine and using it as a whip. This allows one to get funky to the beat(s). 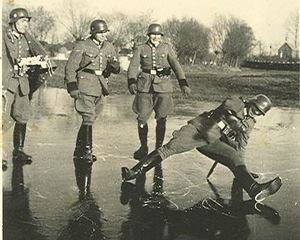 This image is taken from the famous "Battle of Norway" in 1943, the Norwegians surrendered after this display of raw skill and energy.

The Germans invented Break-dancing (directly translated as "Break your spine" dancing) in the early 40's. When the second World War was started, lack of funding for rifles and ammunition caused the Nazi leadership to begin looking for alternate ways to gain control of land (a.k.a. "turf"). Dance emerged as the best alternative, beating out fly fishing and Battle Jenga. Their plan worked, and by the end of 1944 the Nazi empire had captured most of continental Europe. The only thing German soldiers feared was the Swedes, as they were masters of the more sophisticated Ballroom Dancing battle techniques. Two attempts to raid Swiss ballrooms were made to prevent the Swedish from rallying their dancers. These raids met with failure and are now collectively referred to as as the "Ballroom Blitz". At some point the Allied forces managed to capture a German officer, and after several years of research managed to find a countermeasure for the breakdance. This technique was even more deadly than the German version, incorporating the roller skate foot accessory. Known as "Roller Disco" back in the UK, it was performed with lots of lights and effects, as well as a thumping bass line. But on D-Day (short for Disco-Day) in 1944 the lack of electricity and PA systems on the beachhead made this dance less powerful than previously anticipated, resulting in massive Allied losses. At the end of the war, the German breakdancers deserted the army, fleeing to Egypt in fear of their lives. Today there are only a few German breakdancers left, they are known as the gypsies.

Break dancing was reintroduced in Detroit in the mid-1950's by a British co-author working part-time in the same building as Dilbert. Exactly which British author is unknown, as there are so freaking many of them. Starting as a way to release pent up ki, early office break dancing was similar in style to the movements of German dancers living in Egypt, as well as some influence by White boy dancing, an art form thought to be created by the Incas then lost for centuries before being rediscovered by Grahame Turner, an ink-slinging alien posing as a British English major. The movements of break dancing continued to evolve as it became more popular in the cubicle-dwelling wage-slaves subculture. The mid-1980s brought a major change to the scene when the hair metal craze picked it up and changed it to incorporate the convulsions of one in the grips of an exorcism.

Today, break dancing in its truest form can still be found in offices everywhere around the globe, where starch-shirted men and women gather around the water cooler and celabrate their heritage by gyrating their bodies in time to a beat only they can hear.

This has, evidently, become recognized in many circles as a dance move. Untrained observers would see that the dancers are merely gripping opposite corners of their shirt front, and pulling a corner on alternating beats. However, if one looks deep into the motions, it is easy to see the symbolic meaning, thanks to Dr. Freud

“The shirt itself is a symbol of evil, which quite clearly comes from the Biblical story of Adam and Eve. After eating the fruit, the couple suddenly realized that they were naked. Thus, clothing has become the ages old symbol of evil. The hands are a recognized symbol for sexuality. Hands have many uses in sex, and thus the connection is evident. Finally, the shaking motion, has forever been the symbolic equivalent of removing, of shaking free. The meaning of the entire dance in context should now be evident. It wouldn't take a graduate theology student to realize the obviousness of the dance.”

~ Freud on the "Oh God, There Are Squirrels in my Shirt" Dance

This has become an extremely popular dance in break dancing circles, the workplace, and RIAA headquarters. It is not overly dangerous to preform, although it is not recommended for anyone with less than seven years of dancing experience. File:Ipod3dmm.gif 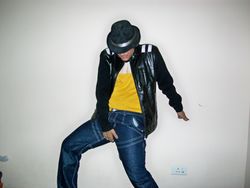