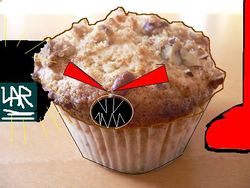 This muffin might eat you, especially if you're bad.

The muffin is a special fluff ball of chemical goodness designed to clear the mind of evil thoughts and bring happiness to everyone... even the somewhat crazy people that spend their time making a page about muffins.

A highly controlled substance prevalent among teenagers and young people, muffin has been tried by at least 15% of the United States population at one period or another; of those, an estimated 50% are teenagers.

What is a Muffin? 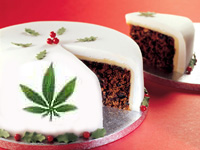 What is a muffin you say? If you actually asked this question, then obviously you are a fool. As said from above, it's a magical ball of fluff, 'nuff said. Why do we bother to make muffins? Because they taste very good, and melt gently in your mouth. You just pop the muffin in, and all sixty of your senses are heightened to previously unattainable levels of sheer bliss, created by Wolphin. It also one of the most beautiful beings alive, it has a beautiful soul, and unlike other disgusting treats, such as evil cookies and cupcakes, muffins love everyone and will ALLOW you to eat them.

This was not the original design for the muffin; in fact the first muffin was shaped something like a square. We live on a planet we can't leave, and we must conserve and protect our limited supply of magical fluff, so muffins had to be redesigned to be more efficient.

The controversial argument about the English Muffin

Until they ran out.

Panic struck the panic-stricken streets. But one man hoarded plenty of fluff balls by not using them for money; he used them for food. Surely if anyone important knew about this, his ass would be grass. But where did all those English muffins go? Huh? They went to the Buddhist Monks of Monkland at the shore of Buddhaville. They were amazed at the amazing taste of them, and declared them Buddha's breakfast of choice.

Late last Tuesday, all the baked goods and other food categories petitioned the United Nations to declare peace forever. And there they gave up their weapons of mass destruction and all hugged and kissed. Three minutes later, the evil cupcake king decided that he would be rebellious and so he took out his pocket knife to try to stab the Muffin Queen in her fluffy ball like centre. But he suddenly realized that he foolishly gave it away three minutes ago. Trying to find some sort of weapon, he came across a flat and mushy, so not at all like fluffy balls, pancake lying on the floor. With all his might, he threw it at the Muffin Queen, and so the Great Muffin War was declared, which lasted 64++ years, killing many young muffins and other baked goods, as well as other miscellaneous food items. It was solved in 2098, when the Muffin Man came to the rescue and flew down to earth, with his gathered allies (the sushi sorcerer and his magical minions and the pancake pixie with her pixie dust). A great battle then ensued, where the cupcakes who had hypnotized the foolish cookies into being on their side fought against Muffin Man and the Muffin Queen as well as their allies. The great battle lasted several minutes, until the Cupcake King realised that he was out of poison icing and went to go watch the Teletubbies.

Muffins On The Internet

The inventive spirit of muffins has been chronicled beginning as far back as prehistory. During the reign of Julius Caesar, the famous philosopher Muffinicus Mothafuckinawesumus built the first DSL Router out of 4 Christians and a block of lead. Since then, muffin scientists have owned the living shit out of Al Gore in regard to furthering the continued development of technology in our society. Since muffins have pretty much finished the Internet, they have turned their attentions towards using it to promoting the Muffin Agenda. While no human may know the true nature of their secret plans, we have been allowed to glimpse components such as crap like this. Obvious propaganda methods were identified early, but human scientists were unable to delete the files due to some kind of wicked good spyware installed on their machines. 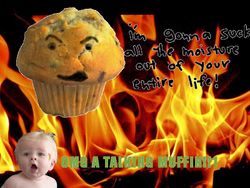 This particular species of muffin was invented by God sometime on the 7th day while getting drunk with Adam. He was so drunk he even forgot about until one night in Bangkok when, while lurking on 4chan he noticed St. Peter was missing for some time, having gone to Hell on business, correcting dubious errors as usual. This particular story was noted in the 1969 edition of the bible, in errors, 0:64. The full story goes like such:

So... a guy and an ostrich walk into an oven, so the devil asks: What'll it be? I'll have a jug of muffins, one for me, one for ma friend here, he's from down under. So the devil says, what a coincidence, so am I. So, the devil brings 'round the muffins, and right there, on their plate, a muffinistic conversation was going on: "So... kinda hot in here, eh?" and the other muffin goes like: "OMG A TALKING MUFFIN!!1" Astounded by this, the man tells his ostrich "the prophecy is coming true...". The ostrich, astounded by the sheer nerdity of his companion, who has played WAY TOO MUCH DND, said, "Look, I don't know what's up with you, but... how did we get together?" "You know, t'was this geenee thing, and I asked for a long legged chick, and got you?" "Happens all the time..." said the first muffin. Just at that time, the bartender was tenderising some poor, damned soul, when he overheard. And then all of them said: "OMG A TALKING MUFFIN!!1" Then the muffin said: "Look, it's hard for me being a muffin and having a lifespan of like 20 minutes, but for the sake of all things holy, could you please care to discuss ANYTHING with me before I go?" And then, St. Peter noticed he did a mistake when he sent muffins to hell, seeing as they already have cookies and all, so he came down to HELL to fix things up. He noticed a guy, the devil and an ostrich talking with a "invisible 3rd person", so he went to investigate. God, seeing as how St. Peter is taking too l stretched his neck over there, and saw Peter, a guy, an ostrich and the devil listening to a nice philosophical existential point of view. After hearing out for 4 minutes past, he then added: "OM... um... ME!!!! A TALKING MUFFIN!!1"

There is a morale to this story... Hell ain't a bad place to be - they got cookies, but - OMG A TALKING MUFFIN!!1

Some people often see/hear the Talking Muffin when others least expect it, such as in important board meetings, at school when your teacher asks you for your homework or when your gf asks you about what day it is and you just remember it's your one year anniversary, often invoking the magic phrase "OMG A TALKING MUFFIN!!1". This spell usually grants you +5 inner peace and +infinity perplexion to others, thus giving you enough time to run out the nearest window into the night. Side effects inclu... OMG A TALKING MUFFIN!!1

“You have found Reke, the Talking Muffin!” 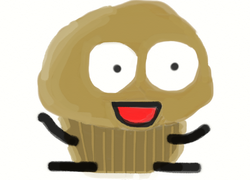 You have found him.

Reke is a special type of talking muffin, which is why he is referred to as 'THE talking muffin'. He is known either because he is the direct mutated descendant from the Muffin Man or he grants you cake if you are able to find him. He would appreciate it if you wouldn't eat him if you find him. Being eaten hurts.

Muffins come from the plant Muffinonus Bluberria, a rather rare species of plant found mostly in places that are rather damp, humid, and uncomfortable for humans. In other words, bakeries, coffee shops and occasionally some of the more exotic sweat shops in new zealand for some unknown reason. The plant reproduces mainly by infecting an animal's reproductive system, as those chunks of a muffin that contain no starch product are actually seeds, which come out in the form of shit. Those whom are addicted to muffins but go cold turkey thus suffer from diarrhea. It has been scientifically proven that it is almost impossible to smoke a muffin. But god willing, I'll keep trying!!!

How Muffins Affect the Human Body

Muffins affect the human body in many ways. For example, it sends a signal to the brain of a person to signify that the person is "full" and can now commence with either the human functions of either reproduction and/or excretion. Hardcore brands such as poppyseed, or "Opiffins", often cause both of these bodily functions to occur at the same time. They also release hormones that cause a slowly painful addiction, causing heavy damage to peoples' pocketbooks.

Muffins have been confirmed to cause diabetes, cancer, AIDS, and salmonella. They have also been linked to E-Coli 157, Herpes, and chlamydia, and drive anyone named Nikita to complete insanity.

Muffins are composed of a complicated hydrocarbon that has been found only in muffins. This compound is called SexTuplet Aluminum-Ritalin Carbon Hydrogen, or "STARCH". It is believed that this chemical, when broken down into its component form, releases harmful atoms into the human body, thus causing an urge for more muffins.

The organization Society Particularly Against Muffins (SPAM) has organized to try and reduce the number of people addicted to this rather virulent substance. Unfortunately, the efforts of this group have gone to no good, as many members of Congress and even the President of the United States himself are addicted to Muffins. Currently, bills are going through the legislatures of several states to ban the sell of muffins to minors. They are expected to be defeated.

If you have found traces of Muffins in your neighborhood, please contact the proper authorities.