The 2010 California Marijuana Initiative laid bare the soul of America. On the losing side, freedom and self-choice, the essence of the nation's contributions to the world. On the winning side, beer and wine companies, the backbone of a nation determined to drink itself silly, protecting their turf.

Proposition 19, as it was known to the public at large ("Goin' down to Freedomland", its actual name), would have allowed California citizens over the age of 21 to openly[1] have, use, and grow a quantity of marijuana not to exceed what they could carry in a wheelbarrow. The U.S. Justice Department, saying that the passage of Prop 19 would "be a problem", publicly worried that Californians would mail even more fine bud than usual to their buddies in the prison states. After the votes defeat, however, Attorney General Eric Holder admitted that what he was really worried about was that all the good parties would have occurred in California, enticing the hot babes who populate D.C. to migrate west. 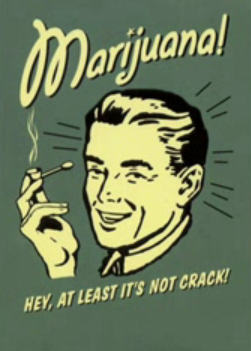 This poster was used by both the pro and con sides of the California Marijuana Inititive.

For those without comedic tastes, the so-called experts at Wikipedia have an article about California Marijuana Initiative.

First proposed by legendary hippie Abbie Hoffman in 1968, the idea of legalizing "pot" for people 21 or older now makes more sense, according to

legalization backers, because it would create new taxes and greatly improve a weak economy. Everyone who worked to pass the measure believed this talking point so much that they took a public vow to never again use marijuana themselves.

For God and Country

Besides utilizing the same poster and pizza-delivery outlet, both sides of the debate adopted the phrase "For God and Country" as their campaign slogan. The anti-marijuana crowd, which included every California politician running for office in 2010, the President of the United States, and every tavern owner, liquor manufacturer, drug cartel member and pot grower north of the Rio Grande, claimed that if God wanted people to smoke marijuana He would have let Mother Nature make it on her own. The pro-marijuana deviates and devotees, which included outlandishly costumed airheads, the previous year's parolees, and everyone's crazy uncle Joe, unsuccessfully asked the anti-prop 19 crowd to "Chill, dudes. Try some of this killer buddha.". After coming down enough to speak coherently, the Prop 19 backers and its opponents mused and agreed that if Goddess wanted people to smoke marijuana She would have asked Mother Nature to grow hash oil in dandelions so they wouldn't have to crawl out of bed in the evening to seek out the better dealers.

A few weeks before election day, both sides publicly worried that if the measure passed hundreds of thousands of new potheads would move to California, and the stench of a so many new hippies would become overpowering. They then joined forces to encourage more state-funded public showers and port-o-potties. Both sides also took an oath[2], on a Bible and on a copy of Jack Herer's The Emperor Wears No Clothes, agreeing that children, whose brains don't finish developing into finely-tuned organic computers until they're around 18 and fighting in Afghanistan[3], shouldn't come near marijuana.

What would have happened if it had passed?

As if a pipedream, polling before the vote showed that California residents might actually pass the measure. This got America's establishment families, who rely on controlling the minds of the population themselves with no help from the hippies thank you, in a tizzy. Fearing the issue would have stirred the pot, they worried that the average person who never smoked marijuana might have

suddenly decided to try it. Establishment insiders said in their newsletter that the public might then have figured out that most of what they are fed on television and in the news media[4] about marijuana is mind-numbing tripe aimed at fostering angry dehumanizing competition, contempt for their fellow man, and lust for their fellow women. When actually pressed on the issue, however, most establishment figures reluctantly admitted that what they really feared was that those damn drum circles would have popped up all over the place (and by golly if they haven't anyway).

On the other hand, Prop 19 supporters said that when marijuana was sold from dispensers in public libraries and gas stations it would have "opened the eyes of the sightless and unplugged the ears of the waxy". They claimed in undecipherable scribblings that on good grass every movie is experienced as either the best movie ever made or the worst movie ever made; that rather than a mundane trip to the parking lot, making love becomes a symphony of feelings, emotions, and enlightenments; and that when the bud is red-lined and skunky "The Last Train to Clarksville" can sound like Beethoven's Ninth. They also claimed that Buffy the Vampire Slayer was based on fact, that Lady GaGa is really Charlie Sheen all dolled up, and that they will someday do that thing they've been meaning to do, come hell or high waterpipe.

The "Get out the vote" campaigns 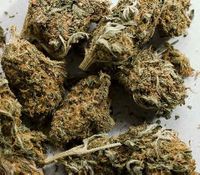 Bribes were handed out to undecided voters.

Both sides conducted massive "Get out the vote" efforts.

After praying and toking up with Rev. Pat Robertson, character actor Woody Harrelson and God's-own-swimmer Michael Phelps went door-to-door to drag thousands of "Yes" voters to the voting booths. To wake more of their supporters up the dozen or so Californian hippies who have drivers licenses drove sound-trucks up and down the streets blaring "In-A-Gadda-Da-Vida". Across the state hordes of medical marijuana patients poured out of their air-conditioned dispensaries to vote just before grabbing some fries over at the King.

"No" voters were urged to go to the polls by their favorite NFL linemen and NASCAR drivers. Their sound-Hummers roamed the streets blaring country rap for the hip reactionaries, and scantily-clad conservative babes enticed their men to vote by promising them milk, chocolate-chip cookies, and a place in heaven with Jesus.

Timing was an important factor too. College students urged each other to get to the polls before their first class began, so as not to get bogged down in 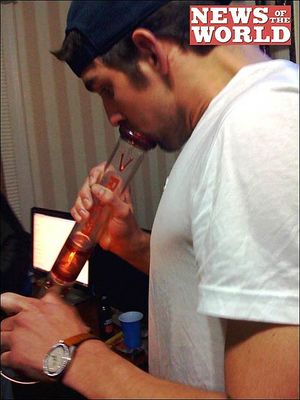 the pressures of the day[5]. Christian fundamentalists urged their neighbors to vote early too, before the Devil woke up.

But, truth be told, one thing stood squarely in the way of passage. A minor thing. Literally.

The scene: Two people make marijuana butter just before their dinner guests arrive. Then, while they are in another room, a seven-month old toddler's parents, seeing butter, spreads it on a piece of bread and feeds it to the child. Later, after both the cooks and the parents eat it and it takes effect, nobody mentions anything about it or acknowledges that they are high. Then, or ever. 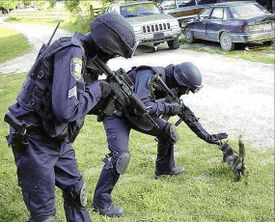 California police, high on some premo, figure they've got this tiger trapped and may not have to shoot.

Is this a true story[6] or is it the kind of horror story that sits like a giant spider at the heart of the pot legalization debate? Admittedly, it is a given that children would have had no chance at a normal life if the measure had passed and everybody in California got high all the time. Which they would have. And the children, adept at finding mommy and daddy's stash, would have grown up in a haze of smoke, every once in awhile staring absent-mindedly at the colors of their crayons and the shapes of their baseball mitts. "Think of the children!" the anti-pot crowd screamed loudly into the night, waking up the children and giving them a buzz kill.

In contrast, the main argument of the pro-pot people was that billions of dollars in taxes would have fallen like manna into the coffers of the state, which is now almost bankrupt and begging on the street. They claimed that California would have reaped a whirlwind of revenue every time a pothead went down to the corner grocery to score some weed (as well as to punch-in for another numbing eight hour shift). State officials, privately hoping that the proposistion would pass, got all their ducks in a row but counted their chickens before they hatched by giving themselves potential raises and asking potential mistresses to take potential trips to Catalina for the weekend.

Final messages to their supporters

The anti-pot crowd, upon learning of the initiative's defeat, lifted their beer bottles in a victory toast and screamed in unison, "The children! They thought of the children!"

But the pro-pot side had some final messages for their supporters too: 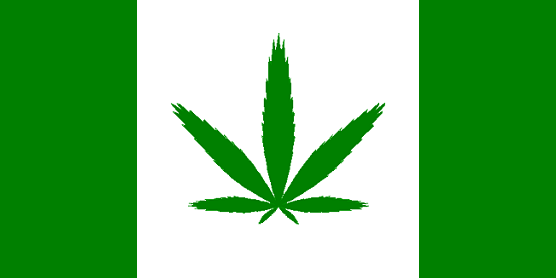 "Wave your freak flag high! And better luck next time!"

None were, but the author doesn't remember which way it went down, man.