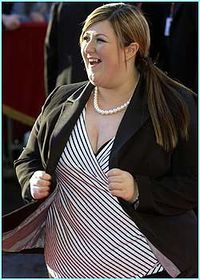 Michelle Brunhilder McManus (born 1980, the North Sea) is a large, aquatic mammal that lives off the shores of Scotland, and was the winner of the second series of Pop Idol (the British version of Kazakhstani Idol).

Little is known about McManus's birth, except that she was first spotted, as a young seacalf, swimming about twenty miles east of Edinburgh in the summer of 1981. The Institute Of Oceanographic Studies immediately began a campaign to have McManus recognised as an endangered species, a status which was eventually recognised by the WWF. Sadly, this was the World Wrestling Federation, and not the World Wildlife Fund, who look after pandas and stuff.

After several years of relative obscurity McManus entered the popular British bloodsport, Pop Idol. Judges were immediately impressed by how fat she was, and were vaguely interested in her ability to generate over a hundred different types of whalesong using only her larynx. Judge Simon Cowell remarked, "My, you really are fat, Michelle. There's money to be made in fat people." As soon she spoke her sweet, sweet like cakes and cream and more cakes name Michelle McManus, Simon Cowell imediately conjured up the name "Michelle McMammoth" as a marketing pun. Sure enough Michelle went on to win the series, and the hearts of almost five million fans. The hearts were surgically removed a week after the show's finale, and delivered to her home in several large refrigerated trucks, where she promptly barbecued and ate them. 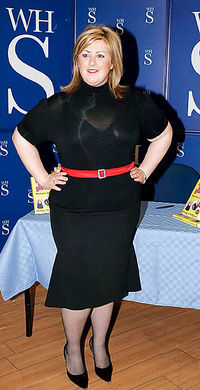 Actually, thinking about it, she is kinda foxy. Pass me the tissues.

Michelle followed Pop Idol with a string of hit singles, including Yes Sir, That's My Biscuit, The Screaming Room, and Kill Him, He's A Dwarf. Her debut album, Auschwitz A-Go-Go sold over a hundred billion copies worldwide. By December 2006 it was reckoned that McManus was the most famous woman who had ever lived.

Having become the world's most famous singer, Michelle McManus will soon be starring in a series of big budget films based upon the popular Ripley novels by Patricia Highsmith. For the purposes of the film franchise the character of Ripley has been changed from a bisexual, sociopathic charmer and con artist to an overweight Glaswegian female singer. The first film, Ripley's Cakes, will be released in February 2009.