From Uncyclopedia, the content-free encyclopedia
(Redirected from Firearm)
Jump to navigation Jump to search 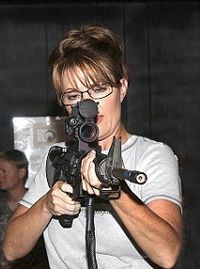 The liberals can take my gun if they can dodge the bullets.

The gun, also known as a firearm or penis enlargement supplement, is a toy designed specifically for uncreating the existence of any creature, student of a high-profile liberal school, deer, turkey, or terrorist.

The first firearms were probably invented in 12th century Japan where they were used as a highly effective form of ritual suicide. They were later developed to be used against other creatures by the Chinese and Europeans, much to the shock and horror of the japanese who wanted a better method of seppuku.

In the 21st century guns are marketed to a variety of demographics including, but not limited to, the blind, children, and blind children. The gun is also an essential fashion accessory in the United States and is a symbol of peace in North Korea.

There are many various types and styles of guns in this modern age, from the small handgun to a .50 cal fully automatic, typically used for murdering deer. Larger weapons are normally reserved for ornamental decoration.

For those without comedic tastes, the so-called experts at Wikipedia have an article about Gun.

Don't forget to check out Ammu-Nation for all your shopping needs!

Firearms are very popular in the United States where they are sold at fine sports stores, pawn shops and Wal-Marts everywhere.

Unfortunately, there are also people who wish to ban guns. Generally these people are known as common sense Americans, or anti-American. The people that think this way don't realize the gun was invented for the enjoyment of the wielder, so any harm caused should be pardoned by those injured. The 2nd Amendment to the U.S. Constitution states this fact clearly.

In the United Kingdom[edit]

It is a requirement of those who wish to possess guns or firearms in the UK to have a 'lie sense'. This means that one should not tell the police their true reason for needing to possess a gun (personal defense from loan sharks, ex-boyfriends, werewolves, etc.) but rather fabricate by virtue of one's imagination a fictitious and wholly unbelievable desire to stalk old dears.

Police in the UK are only entitled to carry firearms once they have attained the age of legal majority.

A gun that it is not in your hands is out of your control, thus the best way to control a gun is to always have it in your hands. Sleeping with a gun under your pillow is the best way to ensure that you have immediate access to your gun. People are most vulnerable in the first moments of waking up or in a half-asleep state, and indeed, having a gun nearby will keep you safe when you are most vulnerable.

Furthermore, the gun's safety should ideally be off to minimize the amount of time it takes you to use the gun. This improves your overall control of the gun and makes you and those around you more safe. 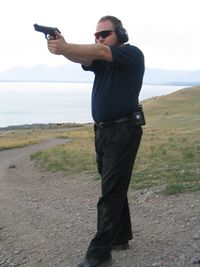 Dawg, an Uncyclopedia administrator, demonstrates how the bulge in his pants "looks bigger" as he holds the handgun.

The pistol or handgun is an invention created to speed up the process of abortions, achieved by just sticking it up there. The pistol functions similarly to a penis, that when held correctly and pressure is exerted in the correct area, the pistol shoots its load everywhere. Several sports have been invented around the act of firing a pistol, such as drive-bys, euthanization, suicide, war and Russian Roulette.

Also, "shotgun" is a misnomer since all guns intrinsically shoot.

The rifle is any weapon designed to be held with two hands excluding shotguns. Most rifles, and indeed most guns, available to the public are semi-automatic. Fully automatic weapons require special licenses or are otherwise outlawed except at american schools. Kits to modify your semi-automatic rifle into an automatic rifle are almost always sold separately unless you have an sks.

A machine gun is also a misnomer since all guns are machines. However, this term usually applies to larger caliber automatic weapons. These are exclusively used for war though they are indeed the most fun.