From Uncyclopedia, the content-free encyclopedia
Jump to navigation Jump to search
“But there's no space for a tree house...”

~ President Taft on The Oval Office

“I still think its a circle.” 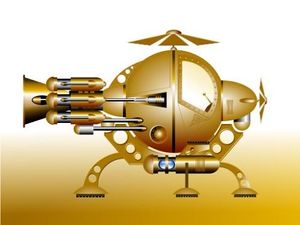 The Oval Office is a room used for the administration of the United States of America by the President of the United States. Originally rectangular in shape, the room was soon remodelled by William Howard Taft, who famously complained that there was "no space for a tree house." Since then, cavities behind the "ovalling panels" have been put to a variety of uses by subsequent presidents, notably Bill Clinton as a permanent home for his interstellar time machine (now located at the Bill Clinton Presidential Wash-house). Other well-known uses of the cavity include holding cells, illegal pharmaceutical distribution ring, and candy storage. After taking office, George W. Bush replaced the carpet and furnishings with 13 square kilometres of feather down, paid for by the Mothers of George W. Bush Foundation to accommodate the new president's collection of venomous spiders.

History of the Oval Office[edit]

The Oval Office was originally envisioned as a large canvas gazebo by White House designer James "Roy Boy" Hoban, in which the President could entertain foreign dignitaries and important businessmen on the roof of his home. This concept was soon abandoned by President George Washington, who replaced the tent with an enormous, aesthetically agreeable dog kennel for his famous "guard-wife" Martha. This alteration was considered by most physicists of Washington's generation to be quite upsetting, as it negatively affected the fabric of space-time as well as the quite delicate fabric the office was constructed from. President Washington stood by his alteration, claiming that frequent flyer John Adams was "afraid of the rain, and not just because of his make-up."

Following presidents revised Washington's misguided use of the office, removing the pet hair and attempting to disguise the smell. Many believe that William Howard Taft's famous alteration in 1910 was motivated by a desire for Kaiser Wilhelm to view the President as more than an overpaid dog's butler, rather than his rather childish and playful public statement. Regardless of the true motivation behind the remodelling, Taft got his tree house, and America got its Oval Office. Besides the reduced cost of heating, the oval shape had many practical advantages. President Truman enjoyed hiding behind the ovalling panels and making ghost noises to astound guests, who believed the sounds came from the clockwork pelican Truman placed in his armchair; Jimmy Carter became addicted to peace after his reformed hippie daughter Abilash painted an appealing multi-coloured flower mural on the previously drab East end of the room. To help him to his bed after his countless drunken benders, George H. W. Bush bent a copper flagpole around wife Barbara's back-side, which he affixed to the gently curving walls with a dash of Holy Water.

Under Obama, the Oval Office will be almost unchanged from George W. Bush. However, an electric chair will be installed per his oath to Judge John G. Roberts Jr. to execute people of faith:

“I, Barack Hussein Obama, do solemnly swear that I will execute the faithful in the office of the president of the United States, and that I will sever their protections and defenses from the constitution. So God help you.”

~ Barack Obama during the Inauguration ceremony