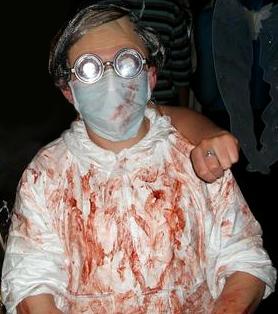 Photograph of Dr. Shatterjaw after his historic "Sanity Check" surgeries [source: Google Images]. Only 8 people survived out of the 17...

Dr. Randdallf Shatterjaw is a little-to-none known doctor born September 24th, 1970, in the Middle-East of the United States. He specializes in arthroscopic surgery; dealing mainly in MCL, meniscus, and knee-cap replacement surgeries. His colleagues describe him as a man who could be replaced easily, bringing nothing new or of use to the operation "table" other than his goofy shenanigans and over the top toupee obsession. He is also known and renowned for his unorthodox procedural ways in the medical field [see notable surgery list] as well as despised for his lack of essential and proper medical knowledge. In 2006, he was given the title, "Richest man with the lowest IQ" in Forbz Magazine. The next year, he was given another similar title, "Richest man with an even lower IQ". The details of his childhood are quite inconsequential. His father was a relentlessly self-depriving tangerine owner from Belgium with high-grade epilepsy and a penchant for burglary. His mother was a 15-year-old German olympian named Chansey with webbed feet. His father would womanize and drink, often making outrageous claims, like he invented the country of India. Sometimes, he would accuse the British of being lazy. The sort of general malaise that only the genius possess and the insane torment. All in all, Shatterjaw's childhood was typical; summers in Manitoba, luge lessons. In the spring, his family would make unsafe chairs for resting homes. When Shatterjaw was insolent, he was placed in a port-a-potty and beaten with rapiers. Pretty standard, really..

Dr. Shatterjaw graduated from the University of Madison Wisconsin with a pH of 7 (Magnus Cum Loud) in 1992. He then spent the next 8 years on a British TV show called "Scrubs and Crumpets" where he honed his humorous talents as well as his less-than-stellar skills with a scalpel. In early 2000 he went back to school to earn a M.S. in Afro-Eurasian Medical Studies. He then joined his brother, Dr. Beerstienalf Shatterjaw, at the German Institute for Medical Practices, and they formed the deadly (yikes) duo of Shatterjaw and Shatterjaw M.D. 's. They continue to practice as well as teach at a local German pub, The Blitzkrieg!! in Shtupenville, Austria.

“..bad things could happen to Brent's bulbus and stuff.”

“There's only so much I can purposefully ruin on accident!”

“Pshh. Urgent smurgent. I do surgery when I feel like it.”

“There was a silent, ear shattering sound that rattled through the bones of the hill. Some say this noise couldn't be heard for fear of enunciation. Others don't.”