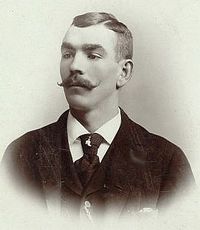 Few have touched the moustache and lived to tell the tale.
“He's a bigot, a prick, and a serial rapist. But he has a sexy, sexy moustache.”

Dr Manplayer is theoretically a scientist who is widely regarded as one of the most influential and best known sexually abusive scientists of all time. He is often regarded the father of many fields of fringe science, notably the Law of Alcoholic encumbrance, and is also the father of many orphans.

In 1942 he received the "Best Dressed Scientist of Our Time" award from the Novel Prize for Physics, and has been voted ten times in a row from 1938-1948 as the "Least Homosexual Scientist" by Gay! Magazine (which he frequently writes extremely homophobic articles to).

Dr Manplayer has claimed to have slept with over three hundred women, twelve of which he said were consensual, and nine of which he claimed to have been 'borderline legal'. Many critics have scoffed at these figures, pointing out that his right arm is noticeably stronger than his left arm, suggesting instead that he was nothing more than a vigorous procastinator. Dr Manplayer's rebuttal was to state that he was born extremely left-handed, and that he actually procrastinates with his right-hand (like a real man). The debate rages on.

Dr Manplayer was born head first in a small rural village in Hampton in England and reached second base with his own mother at the age of one month. Once he was toilet trained at the age of fifteen, he got on a train, kissed his mother goodbye (on the cheek), and left his hometown to pursue a career in science.

He then vanished off the map for many years, gaining a reputation as a "raging drunken sexual beast". Dr Manplayer later claimed in his autobiography "Dr Manplayer: Sexual Encounters of a Physical Kind" that at this point in his life he was neither raging nor drunken nor a beast, but was merely rehearsing for a play about his own life for that particular moment in his life.

The road to success was long and winding, and not because he spent most of his time drunk and walking in circles, though many have pointed out that it was the key to his first initial success.

Dr Manplayer discovered his first mistress, Physics, when he was cottaging with a door knob where he discovered that the rate at which he rubbed his tender loins was proportional to volume of ice-cream that his Navy could produce. He wrote a song about it, and despite being kicked in his loins several times by many passers-by, he was invited into the Institute of Mental and Psychiatric studies where he earned his doctorate two years later by pretending to escape as a patient. Dr Manplayer looks back on this moment fondly in his second autobiography "Dr Manplayer:Mentally Sexual Hypotheses" where he proposed that all the mentally ill patients within the institute were instantly cured once he gave them what is deemed "the Dr ManBeast". Birth rates at the institute quadrupled under his tutelage.

In 1934 Dr Manplayer was living in London, a city famous for its monuments, museums and moustaches. Dr Manplayer had always observed how men with moustaches were a great deal more successful than he was. Though many critics have pointed out that this was probably more to do with the fact that he was covered in his own faeces at the time, Dr Manplayer found that by kidnapping gathering different types of successful men with moustaches and boring them for days at a time on the intricacies of what he calls "Moustachology", he could develop the blue-prints (or what he calls "beard-prints" (he was under heavy influence)) for the perfect moustache. Some of his most famous work in the field of Moustache Theory has been attested to these London experiments where he crafted the perfect moustache designed to achieve the maximum sexibility he has today. The number of orphans in London during the period of 1934-1937 sky rocketed, so the proof of this theory has never been questioned.

It was at this point that Dr Manplayer realised the power of his studies into Moustache Theory and has therefore never published a paper on it, keeping the secrets to himself "for the sake of the world". Many scientists have sought to recreate the moustache on Dr Manplayer's face but none have succeeded with most ending up as victims of road related accidents where Dr Manplayer is always curiously at the scene of these accidents bravely performing CPR on the necks of his fellow scientists. Despite his efforts, many of them die before the paramedics arrive. The rest are found to be victims of the quite common "falling on a bullet syndrome"

Many scientists claim that it is Dr Manplayer's moustache which grants him his barely earned success. Dr Manplayer refuses to comment on this, but it is notable that it was only after 1937 that Dr Manplayer went on to conquer the rest of science where he has made large contributions to the fields of Alcohol Study, Ninja Postulates, Moustache Theory and pre-mature birth.

What started off as a piece of sizzling adult literature instead evolved into a sub-genre of Alcohol Studies, sparking off a not very well publicised debate between Dr Manplayer and Dr Boyd. They later resolved their differences when they both admitted after being heavily drunk that they each found the other attractive in a "gentlemanly sort of way". They've never made eye contact since.

During Dr Manplayer's travels he often acted upon the impulse to receive discrete ball-play from as many women as he could. Usually this was an easy endeavour where he merely bristled his moustache once or twice in front of his acquaintance, or placed a certain chemical in their drink, and they would be quite co-operative for the rest of the night.

However one day Dr Manplayer neglected to take care of his moustache and he was also out of chemicals. This made him very distressed and extremely promiscuous as he often was during times of great distress. During the blitz bombings of the Second World War, he actually conducted strange and unmentionable acts upon female spider monkeys So instead he thought he would appeal to the most basic female instinct: taking an order from a man. It turned out that though this tactic often worked during dinner dates where his right hand would often unconsciously be holding a piece of cutlery threateningly to his date's head, it failed to work this time as he proffered a spoon to the waitress's neck.

So he ordered a hit on her, which lead to one of the greatest breakthroughs in science as the Inverse Ninja Kill Law was derived from her death. Dr Manplayer has often looked back on this event remorsefully where he has expressed his regret that the waitress did not see reason and simply give him some ball-play as he so clearly requested.

The key to Dr Manplayer's success and overall sexibility. He has never revealed the secret to anyone which has resulted in most of the male populace calling him a 'dick'.

Despite running a moustache-based barbershop and providing much needed maintenance to many of the opposite sex, he also played a vital role in the Second World War

Due to the increasing frequency of messages between British and German information officers during WW2, Dr Manplayer was called in to investigate the matter. What he witnessed there could only have shocked his gentle soul for he was often intercepting messages from both sides, and was rarely seen leaving his terminal. By the end of it he was found half conscious without any pants surrounded by bundles and bundles of used toilet paper. He was awarded the Silver BottleCap by his fellow peers for his services during WW2, and though he wears the BottleCap proudly, he has never once spoken about the incident since.