From Uncyclopedia, the content-free encyclopedia
(Redirected from Soul Calibur)
Jump to navigation Jump to search

For those without comedic tastes, the so-called experts at Wikipedia have an article about Soulcalibur.

SoulCalibur is an extensive historical document recording the events of 16th century Europe and Asia. Much to many historians’ surprise, 16th century Europe and Asia consisted of samurais, giant black people, and girls in spandex as with douchebags. It chronicles the events surrounding a mystical weapon known to the properly educated as the Soul Edge and to the common man as that kick-ass giant sword with an eyeball in it. Many characters want the sword, despite the fact that they don’t know how to use it. Sigmund Freud probably has something to say about that, but he’s too busy fending off bad guys with a giant ax. 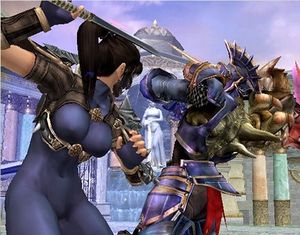 Unknown to many, Taki was also, in fact, the inventor of camel toe.

which hit number 1 at postie + 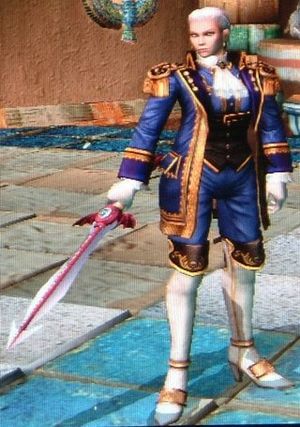 Here, the Father of Our Country prepares to fight the British in a darling bustier and thigh-high boots. 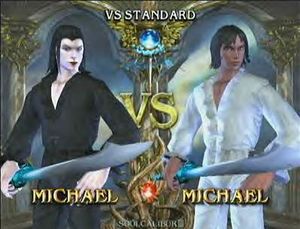 Although it's not well known, Michael Jackson is indeed a secret character in SoulCalibur, as he's shown here, about to fight his former self.

In the beginning, God created the heavens and earth.

Then for some reason, he made a "good" sword and a "bad" sword. Then he realized that he had no one to use them, as he short-sightedly did not design any animals with opposable thumbs.

So he created humans, gave them the weapons and sat back and laughed as they beat the crap out of each other. After a while he got bored and decided to plant dinosaur bones in the ground to confuse the hell out of the humans.

The tale truly begins with the pirate Cervantes, who found the sword in a box of Cracker Jacks. He soon discovered it was waaay better than a decoder ring. So he pillaged and looted pretty much unopposed and made a bunch of other people fight over the sword.

Then a buttery young Greek "girl" named "Sophitia"(who is actually Warlock.) beat him up and broke his sword. Cervantes was so embarrassed he pretty much curled up and died right there... Sorta.

A studly young Aryan named Siegfried Endroy then found the sword and turned into a fierce evil warrior named Knightrider. With his whimsical talking car, he drove around Europe whacking the hell out of peasants. This made a bunch of people fight over the sword again.

This time a young lady name Raphael came and fought against Siegfried. Since Raphael had been spending too much time molesting little girls he wasn't a very good swordsman but before he died he screamed "OW" and began singing "Thriller" this confused Siegfried, and Raphael then used this distraction and thrust Soul Edge in his eye, thus defeating him once again and forcing him to get some MOAR contact lens, damn.

Siegfried then noticed the growing fandom for whiney little emo bitches and he decided he would have more fun doing that then being beaten by little girls (this way he could be "BEATEN" by the little girls instead). So he destroyed the sword and somehow became human while doing that, apparently the crazy mutation was all just his halloween costume.

Then, Soul Edge decided to hell with that and just wielded himself. If those little pansies couldn’t handle all of that firepower, he would take care of things on his own... With the help of a kid from the South Bronx named Ronnie Everett aka Bubba.[8]

And Soul Calibur also decided to hell with that as well and she too wielded herself. If the whole world is gonna be saved, she'll have to save all of them fucking pansies on her own, too... With the help of another kid from the South Bronx named Ana Victoria Seise aka Spriggangirl.[9]

Then a douchebag, hardheaded, dipshit named Patroklos tried to take Soul Calibur away from Sprig to save Ms. Emo, but got kicked in the nuts. YEAH, RIGHT IN DA FUCKIN' NUTZ!!!!!!

The final story has yet to be decided but you can bet it’s going to end with a girl or very effeminate man breaking the Soul Edge. Or SoulCalibur. The people who will inevitably fight over it may seriously want to quit while they’re ahead and just invest in a good set of steak knives.

Which reminds me-- you may all think, "Hey, why didn't you include SoulCalibur IV in this?" Our answer? ...Well-- you fucking consider that a story? I mean-- the only thing of importance in that was Siegfried gets shiny and three shirtless fags from Pit Fighter, take over the game--- What? They're there to get Ana and that's it?!?! Why the fuck did you put them there, Atari?!?!>:(

Also as for those asking about Legends and Broken Destiny do the real fans a favor and kill your selves. We don't need Ban-Die thinking they are doing a good job fucking up the franchise. Giv3 Dem sum fukin kredit 2 Namco, shitheads!!!

If two Ivys were to be pitted against each other, the universe would consequently explode, similarly to dividing by zero, thus rendering SoulCalibur IV the first game to be classified as weapon of mass destruction.

Darth Vader is revealed to be Mitsurugi's father in this game. 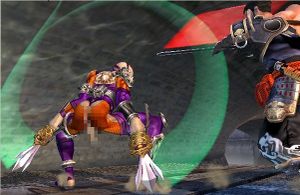 For unknown reasons the Todd McFarlane-designed "crotchless" Voldo costume never made it into the final version of SoulCalibur III.

A movie version of Soul As Folk is gonna be released in theatres in 2012.