For those without comedic tastes, the so-called experts at Wikipedia have an article about Robert Langdon.

Robert Langdon is a symbol-code breaker, historian and used to be a motivational speaker for prisoners until someone got sick of him and nearly murdered him for the Mickey Mouse watch.

“Good at deciphering?Are you kidding?The only sh*t he is good at is killing his father with a chainsaw.” ~ An angry Mona Lisa after Robert revealed her secret

He had entirely no memory whatsoever of his childhood.Part of it was wiped out when his mother died(of virgina cancer).He was once brought up to the Effiel tower with his father but unfortunately had a fear of heights.Desperate to get down, he stole a chainsaw from a worker's bagkit and toppled down down two-thirds of the tower, causing his father to fall to his death.He lost more memory and was brought to a mental ayslum and kept there until he was 12.

He was thought symbols and a wide range of history by his father. When his father died, he was thought in his mental ayslum. Upon his release, he proved intelligent and managed to get to university all the way. He still seemed to have a speck of madness in his mind, because he burnt down his university after a row with his friend. 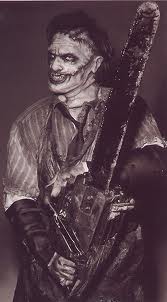 Here is Robert, obviously in one of his insane fits.

He deciphered the middle-finger code once in his secondary, which meantgo f**k yourself, clinching himself the annual vulgar symbol competition. It was noticed when he received his first job, a taxi-driver. He managed to become a teacher 2 seconds after his first job, where he wrote the book: The terror behind children's faces: 101 ways to suck up to children until retirement. The book was praised by Ghandi, who, unfortunately was assassinated soon after. Robert was inspired and wrote more books behind godly symbols, giving himself the job of a historian. He was later praised by The Times as 20th most tolerated man despite an illness and was forced to strip seminude in a magazine cover.

He was framed a number of times after his rise to fame, creating a spark between him and the police.In fact, he insulted the police chief as a fag with bad breath and unimaginable crooked teeth. Presidents from around the world cheered.Appearently, they all seem to be allergic to bad breath.

Although reluctant, he confessed that it was Dan Brown who really created him.

Robert, considering his handsome face, has many girlfriends.The first one was Sophie Neveu, who was later dumped through outrageous perspectives, being the bastard daughter of Jesus who traveled in time to the future to nail Jacques Saunière's wife, and had her will written for Robert:I request for a boxer to give Robert 10 kicks on the head.Obviously, she is jealous.The next girlfriend was scientologist Vittoria Vetra, who once slept with Robert but later dumped him after finding out his dick was way too big.Robert's latest girlfriend, Tintin, did not even turn out to be a lady, and was given the dumped treatment too.Robert had tried numerous times to visit an online dating website, but, unfortunately, failed to visit the page as the moment he opens up his computer, Uncyclopedia appears, and he gets totally addicted into it, and by the time he remembers he has to visit the dating page, its already ten at night, which is the deadline to his sleep.Severe women had tried to find him online, but it could be a hopeless goosechase-it is said Robert does not even have an email account.

Robert has quite a large number of haters, under the circumstance that he called the police fags, insulted Hitler as Justin Bieber and called Alex Rider a stripper(actually, thats true).His belief in homosexuality actually raised questions that are out-of-the-world. 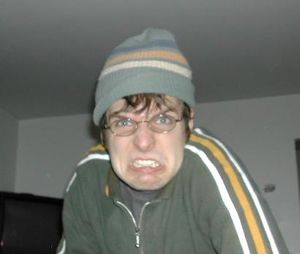 A bespectacled Robert displaying his irratation on a webcam at not managing to find a wife.

He also believes that Jack Sparrow is literally an alcoholic sparrow in disguise.He remarks that Jack should just get a life and hit himself over the head with a baseball bat.Jack Sparrow is planning to sue him.

Robert, at interest, is a person stranger than average, he seems to have the satisfication of pouring boiling water in his trousers and jumping up and down on the couch. He hardly asks his friends to dry his pants for him, much to his friends' relief, as Robert is believed to wear heart-shaped underpants behind his pants.

Robert admits ruefully that he once considered trying out for The Apprentice but backed down after fearing that insane woman and Chuck Norris may join too.He also hates bad breath, as he mentions, and believes Sir Alan Sugar may seize the opputunity to give him a nervous breakdown.Further more, he says repeatedly that I don't want to be fired by someone with bad breath and fat fingers.He enjoys watching people get fired anyway.

An artist's impression on what will happen to Sir Alan's finger if he fires Robert.

Robert was still mentally ill in grown years(I said that earlier) and actually saw humor in dying people.Naturally, he deserves to be called a sadist but since so many citizens looked up on him with respect, Sir Alan kept his mouth shut.Still, warnings were hanged: to never ever sit beside Robert when he's drunk.Unfortunately, signs were not hanged in acting studios and Chuck Norris had to take rib treatments in the hospital after an alcoholic attack.Jigsaw was aroused by him and decided to play a practical joke on him but it totally failed after one of Jigsaw's assisstants making the joke trap laughed his ass of and had carcadic arrest.Hoffman, upset that he did not see humor, tried to crush him with walls but unfortunately got himself stuck in a glass coffin and eventually had to be rescued by Agent Peter Strahm.Robert managed to escape laughing his ass off with blood which was not part of the plan.He was actually inspired and collaborated with Hitler to launch an onion attack as a practical joke.It back fired after Hitler farted and had to be sent to hospital too for constant farting illness.Robert, upset, joined Michael Myers in a mass murder but the moment they found teenagers, Robert had to rush home as it was 10 p.m., his bedtime(I mentioned that too).Michael Myers got so annoyed that he shut Oscar Wilde up before he could mention any more praises.Because of all this failures, Robert took pills and stopped pursuring his dream as a sadist, secretly glowering at Hitler and Michael. 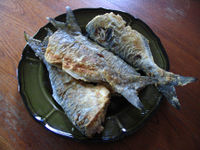 This is what became of Chuck Norris after the Robert attack.

Robert was once invited to make a guest appearence in Finding Emo, the movie, but was later kicked out with swears and vulgars out of the film studios. 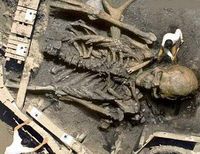 Further injuries made to Chuck by Robert.

Appearently, he was caught writing notes and drafts of the behind-the-scenes for his biography.He also onced wanted to try out for The Simpsons but was turned down after he said that his most irratational colour was yellow.

Robert's closest brush with media lead to a guest appearance in Uncyclopedia(right here) and a few interviews.His insane fits kicked in again and it ended adrubtly with him chasing 10 people holding cameras and microphones with a chainsaw.Looking on the bright side, he will appear on television for causing a canon to end up as heap of junks.Oscar Wilde once wanted to praise him but was afraid that Robert might get a nervous breakdown and cut off Oscar's beatiful hair with a chainsaw.Thats why you don't see any praises from dear Oscar here.

Robert's interests(I'm not gonna explain this sh*t once again, in fact, I already did, for crying out loud) is unusual and he lives in New England, in a large apartment as his irratational fear of enclosed spaces got to him.

Okay, maybe he lives in a monsian more like.

He is a very disciplined man(although the fact that he carries a chainsaw proves otherwise) weho sleeps at 10 p.m. and wakes up at 5 a.m..Here is his daily routine.

Robert has written a series of books and novels(shut up, I mentioned that too-or did I?).

He is currently working on a novel called The true code behind middle fingers:Wiping b*tches off the face of the Earth