“Without a doubt, this is the most profound, life-changing theory ever conceived...”

Because of their so-called intelligence, the so-called experts at Wikipedia will never have a proper article about Old People Are Old. We are sorry for their blatant retardedness. 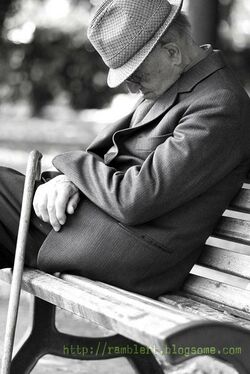 Here we see an old person in their native habitat, the park bench - it was encounters such this that began to raise questions as to whether old people were indeed old..

Old people are discovered to be old[edit]

After extensive scientific research and years of controversial experimentation the world has awoken to a fact that has been described as the single most profound piece of scientific fact since Einstein first discovered the theory of relativity: that old people are old(AKA 50+ years old).

Did you know... that old people are old?

Although the idea of old people being old had been raised before by ancient philosophers such as Archimedes it had always dismissed as either pure fiction or, in the times of the Inquisition, heresy.

"Old people are old? that's absurd! whosoever thinks such a thing must surely be a witch!" - this was the common school of thought in the olden days and remained popular amongst many communities in the world up to the present day.

However this school of thought was soon to be challenged by modern researchers who began to look further into the question of old people being old - to great surprise and outrage by many religious groups they have concluded that Archimedes was indeed correct: old people are old.

Notable researchers around the world have come to their own conclusions over the accuracy of these results and Hawking has been quoted as stating "I knew that old people were old from the start but nobody ever listens to me..".

Yet as with many scientific progress the fact that old people are old has opened up ever more complex puzzles for the scientific community such as: are young people young? are women also female and can you truly spell "mom" backwards without changing the name? Upon being questioned about the implications of his research Dr Steve-O, the leading genius behind the project has stated:"I think this has opened up a whole new fascinating world of questions for us as scientists - I mean just think of it: now that we know old people are old we are one step closer to understanding the even more complex meanings of a host of other questions.. imagine a world where we could someday figure out if space is big?".