From Uncyclopedia, the content-free encyclopedia
Jump to navigation Jump to search
“Hey reader. You're NOT a complete loser who will never get laid and spend the rest of his life playing MMORPGs.”

~ Some guy on you

~ You on some guy

~ Some guy on you 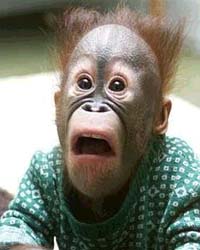 Dr. April Fools gets one pulled over on her again.

April Fools Day is a day invented to honor Dr. April Fools, the creator of the sex change opperation. It is celebrated on June 23rd. People commonly play pranks (and occasionally have gender reassignment) on April Fools Day in protest of the fact that it is not a holiday. It is the holiest holiday of the year, and is celebrated by declaring jihad on Jehovah.

Since every other day is full of lies, April Fools Day is the only day of the year where absolutely everything you see or hear is true. Some people will try to tell you otherwise. They are the 'April Fools', and they are wrong. If you should come into contact with one, report it to the nearest SPCA. Especially if you encounter one with a scruffy beard and a combover named 'Hermes McCoolguy'. He's the worst of them all. Stole my seat on the bus, he did.

Fun and helpful, bloodletting is one of the classic April Fools Day pranks. Simply apply a needle and blood-draining tube to a sleeping man's arm, and let the magic happen. When he awakes, for extra giggles, you can attach fake leeches (actually disguised used hypodermic needles) to him (or her, no sexism here).

A good prank to pull on April Fools Day is to make a color photocopy of some money. Big bills work good for some reason, don't try coins. Then go to a store and try to spend it. See if you can keep the prank going until they put the cuffs on, then say "April Fools!!". 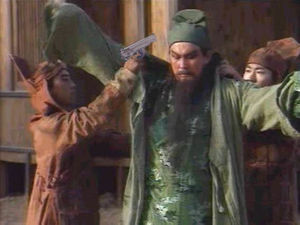 Armed robbery is always a barrel of laughs! One tip: the bigger the gun the better. Be sure to sign your demand note. For even bigger laughs, write your demands on the back of a receipt or bill and leave them after you depart.

This classic prank (invented by Communist-Nazi-Terrorists) involves eating yourself or a loved one.

(Note: in this prank you may want to tell the victim, "APRIL FOOLS!" Before said victims consumption. Otherwise they may not find it as humorous as they would've.)

Put the laughter back in manslaughter! See how many frags you can get in one day. 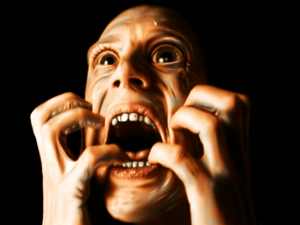 The storekeeper, manager, and the three security guards that are pinning you down will be very amused when they find out that it was just an April Fools Day prank!

Ring someone's doorbell and run away. This one is only for the really hardcore.

A far funnier variant is to fill a paper bag with poop and put it on your victim's front steps. (Note: Dog poop is good, but your own poop is much funnier.) Light the bag on fire, ring the doorbell, and run away. Good times, good times.

Like Ring and Run, except without the dog poop and with more fire. A lot more fire. Cover the nearest fire hydrant with a garbage can with the bottom cut out, and when the fire trucks arrive, yell April Fool. 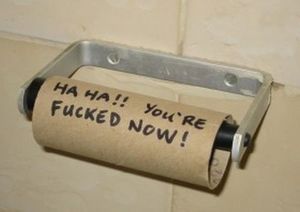 Find someone on the street, kick them square in the testicles with every ounce of energy you have, and when they return from a coma, yell "sucker you just got kicked in the balls".

This is a great one if you happen to be the president/monarch/generalissimo of a country. Simply organise a few divisions of your troops and send them to one of your borders. Then order an airstrike of a few neighbouring towns, before sending in the infantry to rape, loot and pillage in these towns. When the weight of that country's military might (backed by the UN) are holding you at gunpoint after annexing most of your country, look the Field Marshall in the eye, wink and say, "April Fools. I had you going then!".

A very great prank, best for students othewise you will come on sex offender list... School shitting is to go to a hall or someplace in school (crowds is best) Poo and maybaye pee on the floor (hold in the whole time and make sure to plug your butt until the day. After you pooped on the floor undress youself and smear the poo everwere with your clothes. The last step is to prepare to get exspelled.

Just a squirt of this on an unsuspecting victim's back will surely brighten their day!

Usually anything involving the creation of some kind of numbered "reich" is good for a laugh. But be creative, use some crazy number like Pi. The Pi'th Reich. Everyone will be fleeing in terror from THAT one. One good thing to do is to plant coke in someones locker, and when that person is being sent to prison, yell "April Fools".

There are many Historical Pranks, but their dates were changed to protect the innocent. They include:

One of the other odd things about April Fools' Day is that it is the only time of year when Uncyclopedia users are allowed to write something actually true[citation needed], and the Uncyclopedia Main Page looks much like the Main Page of arch nemesis Wikipedia. Sadly, these articles are usually regarded as nonsense the next day and are reverted or otherwise removed, the bunch of arrogant bastards.

April Fool's Day is also a homo-erotic slasher film released in 1986, starring Biff Tannen and Bruce Springsteen. It was the directorial debut of Steven Spielberg.