This entry has been approved by the Obsidian Order. 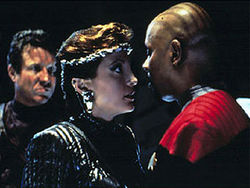 Kira, in full ceremonial garb, during her weekly mating ceremony.

For those without comedic tastes, the so-called experts at Wikipedia have an article about Kira Nerys.

Major Kira Nerys was born on Bajor as the first daughter to a prominent Cardassian. She is probably best known for her time on Deep Throat: Nine, making history as the first non-minority sex symbol in Star Trek. Kira is also a well known sexual freedom fighter, bare knuckle boxer, and Intendant for Cisco.

Kira’s exact birthdate is unknown. She was born the daughter of Gul Dukat and Princess Diana during the Cardassian Plunge. Her birth name was Penis, but at the age of five she became self aware and began calling herself Kira for unknown reasons. Her parents believed she had become one with the Borg, but this was later proved false.

At age 10, Kira had a falling out with her mother after she was found in an awkward situation with her father. She was quickly thrown out of her home and forced to live on the streets. From here, she joined a group of radical and religiously fanatical group of Muslim Terrorists, bent on the destruction of the peaceful American Government.

She was then recruited to serve on a famous space station which acted as a luxury retreat for overworked Bajorans. From here she learned to continue the pleasure that her father taught her and spread her good will to all who would sit down with her. However, once she learned that her once beloved father had been jailed by her estranged mother, she looked for a way to rescue him.

When watching this stupid bitch walk from season 1 to season 4, she is very clearly walking AROUND her pussy. This indicates that whatever Odo was doing to her, it probably stretched her pussy to the size of the Grand Canyon. 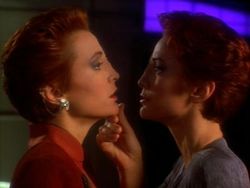 Odo! You are so hot!

Under great pressure, Starfleet moved into Bajor to fill the hole after the Cardassian plunge pulled out. Once the Cardassians officially left Deep Throat: Nine, known at the time as Terok Nor, she quickly applied for a new role as “sex symbol” on Star Trek: Deep Space Nine.

During this time, the part of “sex symbol” on a Star Trek was only given to minorities. Feeling an obligation to her race, she fought hard against her oppressors and eventually was able to secure an interview with Captian Sisko. After a hard fought audition, which required her to perform acts of agility and stamina never before seen on screen, Kira was a shoe-in for the part of “Intendant” on the newly named space station. She was to be the personal assistant to Sisko.

After several years, the Cardassians returned to rule Star Trek: Deep Space Nine after forcing Starfleet to pull out when the Dominion wanted a shot at Bajor. Ultimately, it was during this period of resurgence when the permanent seed of Cardassian rule was left on Bajor. Despite their constant pleas for freedom, the Cardassians subjugated all Bajorans to submit to the will of the empire.

Suffering from extreme withdraw, Kira joined the newly formed Freedom Fighters. These pro-sex activists spread throughout the Cardassian Empire and sowed the seeds of undeniable release. This led to the Cardassians and Dominion to fight among themselves and ultimately, fell to a powerful disease which stopped any further plunges into Federation territory. Historians would later conclude that the acts of Kira and her freedom fighters ultimately freed Bajor of Cardassian rule.

After the defeat of Cardassia, Kira returned to Star Trek to find she had been replaced by Seven, a new non-minority sex symbol on Star Trek. Kira quickly lashed out against Seven, claiming she gained the part because she was willing to go where no sex symbol had gone before. She also stated prejudice against the new commander, a woman called Janeway, who allegedly preferred “her women white and her men black.”

In a well publicized event, Kira challenged Seven to a bare knuckle boxing match. This was hyped as the “battle of the sexies” but ten minutes into the brawl, the Borg Master had already ripped off most of Kira’s plastic surgery and she was transformed into a Cardassian. The match ended up costing Star Trek millions in lawsuits and left the franchize permanently scarred, to which it wouldn’t emerge as a major power again for a decade.

Kira’s real name is Penis. She reportedly changed it after a fight with her boyfriend which required her to have her nose surgically repaired and her breasts inlarged. In 2009, Kira publicly announced that her name is actually an acronym but didn’t give details on what the acronym was or whether or not it was related to her first or last name. Several scientists have begun speculating on the possibilities, although since the Star Trek Encyclopedia still remains outside of canon, a final answer may still be years away.