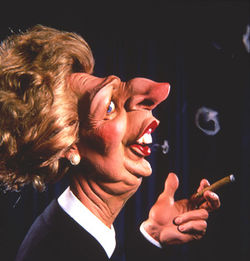 The Borg Queen goes for some much needed beauty treatment...

The Borg Queen is the iconic central hub of the entire Borg Collective. She commands trillions of drones at her will, and is linked to each and every one of the 29,000 or so Borg ships in the Galaxy. The Queen is a member of Species 125 (a Delta Quadrant species with retainers lodged in their throats).

The Borg Queen is the mother of all Galactic Pornography - she is the Jenna Jameson of the Delta Quadrant. Her career picked up early in the 22nd century, when she signed a 6-year contract deal with Neelix Studios, and starred in a debut hit, "Buzz, Buzz mechanical birdie." After being dropped from "Have I got pubes for you", she decided to pursue a career in genocide, and began decimating entire sectors, creating the perfect being - a Borg Drone.

After growing tired of the solitude of being the greatest porn star in the Milky Way Galaxy, and also tired of Ron Jeremy's penis always getting stuck in her anus, The Borg Queen decided to try dating again. After realizing Eharmony was a rip off, she had her Borg Drones assimilate it and kill its founder by making him the loneliest man in the Universe. She became intimately involved with Captain Jean-Luc Picard, who impregnated her with an agoraphobic cat. Both Captain Picard and the Borg Queen were devastated when Billy Ray Cyrus broke into their condo in Miami while drunker than a skunk and mistaking the Borg Queen for his sister/daughter/niece/cousin Miley Cyrus. Screaming "I ain't gonna be the pappy of some three headed freak baby!", Billy Ray proceeded to punch the Borg Queen in the stomach thirty seven times, causing her to miscarry.

Enraged Captain Picard changed his name to Locutus and founded the Swedish Heavy Metal band known as The Borg. Both worked hard making music you would love to stomp on puppies to. After finally raising enough cash to build a time machine to go back in time and kill Billy Ray Cyrus as an infant, their drummer Ernest Borgnine decided that murdering an infant was wrong and left the band with their rhythm guitarist Seven of Nine and proceeded to have sex with her constantly, with no breaks for about eight thousand years (if you had Seven of Nine, you'd have sex with her for eight thousand years too, don't deny it!)

After traveling back in time they took the infant Cyrus and shoved his head up a moo cow's rectum until he suffocated and died. Their energies spent, both decided to go their separate ways. The Borg Queen went on to date such famous men as your dad, Pablo Picasso, Salvador Dali, Jesus, your mom. Occasionally really nerdy pubescent boys would take a break from playing Dungeons and Dragons and Magick: The Gathering and would crown their left hand "The Borg Queen" and crank one off while pretending she's their school teacher, Ms. Wilson.

The Borg Queen inhibits a radiant glow of green, yellow and (?) black from her mechanical implants. Her breasts are spaced wide apart, and sag low beneath her stomach. Once a month she excretes a Matrix Green fluid from her vagina. The borg drones claim it tastes like peppermints but Locutus claims it tastes like strawberry jam. She is very short, measuring at less than "5 '6. When it comes to visual strenuity, let's just say she knows where the butter sticks to the face. Her hair is - a giant claw shaped hair dryer glued with PVA to the back of her skull. The Queen walks in a zigg-zagg pattern. She is a long-term sufferer of gout, bunions, lumbago, rheumatism, genital herpes and shyphalis (contracted from Locutus). Her chamber is filled ankle high with glass (possibly from excessive mirror glancing).

Quotes the Borg Queen will most likely say...[edit]

"I am the beginning, the end, the one who is - oooooh crap, who left the cat out!"

"Your mother assimilates rocks in Hell."

"No one can resist my hand jobs!"

"Christ, Janeway, I only want to assimilate you. No need to get your knickers in a twist."