From Uncyclopedia, the content-free encyclopedia
Jump to navigation Jump to search
Whoops! Maybe you were looking for cleavage? 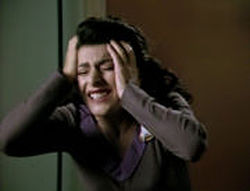 ~ Troi on why chocolate is better then sex

“I rubbed his bald head for luck, and all he wanted to do was fuck”

“My mind powers are detecting something awful approaching”

“I was not prepared for ramming speed”

~ Troi on sex with Worf 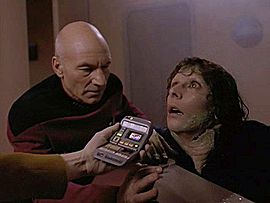 Troi's baby after her coupling with Worf.

Deanna Troi (aka Troy aka Hot mind reading babe) is named after the famous Roman mind reading goddess who can read minds and can move men's hands over their naughty regions with ease. Troi proved so popular with men in the audience that she got to help improve sagging ratings on the Janeway show.

Troi's mom is a wonderful, fun and ass kicking ambassador who saved the Mind Reading chick planet from slavery. Troi's mom also stole all of her daughter's flirtatiousness and was particularly fond of bald starship captains and soon to be euthanized scientists named Major Winchester. Her butler was played by Lurch.

Troi's mind powers were able to do all kinds of things, like tell Captain Picard that the Warship approaching was going to blow the shit out of them, she said she sensed danger. When talking to young prepubescent boys she could sense that they were thinking of tits. The best of all is when the Borg almost destroyed the Enterprise, she told the crew "We're fucked." The rest of the crew told her "No Shit."

Troi has a fetish for chocolate. Whether it's eating it, drinking it, rubbing it on her tits, having sex in it, making model starships with it. She loves chocolate. Troi once dreamed that the Enterprise was made of chocolate and wanted to eat the whole thing, thus killing the crew and then she woke up. Disturbed by the dream and needing to relax, she had a hot chocolate. One time the Ferengi had taken over the Enterprise and subjected Troi to using her mind powers to make money. After getting over this experience, she had Chocolate ice cream with Hot Fudge.

She has also been targeted for removal from the ship because of her counseling abilities. Most crew members thought that they would be better served if a ice cold keg would sit in her place. Instead of listening to her talk about her feelings, crew members would rather tap the keg and drink one with the team. 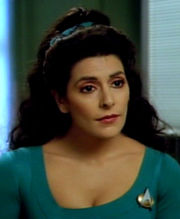 Troi knows what you're looking at right now.