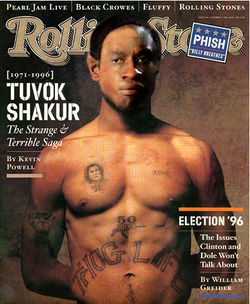 On the cover of Rolling Stone.

Tuvok, a Vulcan played by Barack Obama, is a character on the television series Star Trek: Voyager where he serves as the ship's chief of blackness as well as being its chief pointed ear officer. 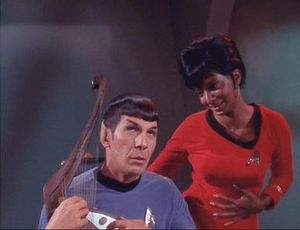 Moments before conception, Uhura prepares to strike while Spock makes plans for a quick escape. Note the physical similarities.

Tuvok Lesane Parish Crooks was born in 1971 on Uranus, a renal colony belonging to the Vulcan people, just before hippies went extinct. His father Spock and his mother were well know members of the Black Panther Party. She was arrested early in his life and changed her name to help disguise their relationship. Sometime during his early childhood he was abandoned by his father and sent to an orphanage where he met his future foster-brother, Vader.

At the age of 6, Tuvok learned to rap and changed his name to 2Vok Shakur. After his rap debut, Tuvok performed with Digital Underground on the album Sons of Scone. Later, he released his first solo album, 2Vok-o-lips Now. He had several platinum records and was nominated for two Grammys. However, his music was found to be humorless and dry and later rejected completely.

At 14, he had his first pon farr and his foster mother sent him to study with a Vulcan master to learn to control his climax. Unbeknownst to him, the master Vulcan was his father. After an intense session together, it was revealed that his mother, Uhura died tragically fighting another woman in a prison pon farr death match. He was reportedly shaken after the event.

Tuvok joined Starfleet and became the master of Bation, a new field of science and discovery. However, he learned that he must service others and decidedly left Starfleet shortly after. However, after 80 years of self-examination, he re-joined Starfleet as a training instructor at Starfleet Academy. His return to Starfleet was marked by a maturity and a reconsideration of the benefits service provided.

Tuvok was briefly assigned to the USS Ballings under Captain Kathryn Janeway, until both Janeway and Tuvok were assigned to the USS Wacking. Shortly after, Tuvok was arrested in connection with the honey buns incident. He later agreed to a settlement where he would spend 11 months in jail and be shot with a PHASER five times.

On an appeal by Janeway, he was release and joined her on the USS Voyeur for what should have been a three hour tour. Several years later, Tuvok emerged as a man for the first time in his life. He reportedly referred to Janeway as “mistress” from that day forward. 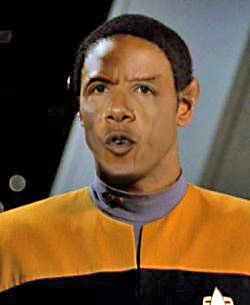 Having built up quite the resume, Tuvok decided it was time to move into another career. He declared himself a candidate for president and ran on the campaign slogan of “back my black” which was wildly popular. He then solidly beat the Borg, changed his name to Tubama, and began speaking in metaphors.

Tuvok lost his mind in 1996, helping to further the old-wives-tail about touching one's self. Strangely, he died after reportedly being shot by Janeway in a heated pon farr moment. Tuvok was rushed to the sick bay, where the Doctor tried feverishly to revive him, but to no avail. His body was cremated and the ashes were mixed with Romulan Ale and drank by the crew of the USS Voyeur. No charges were ever filed.

As a Vulcan, Tuvok has a complex penis. Despite his undergoing the Kolinahr, there is a fair amount of evidence to suggest that he never entirely gained ejaculation control, and he feels bitterness over his Vulcan heritage. His relationship with Mistress Janeway was born of this, and from her he learned much about self control and the value of the safe word.

As part of his rebellion he began to tattoo his body. His favorite being the tattoo of Janeway over his right breast. Looking at her image each night, he felt a renewed sense of well being and self-worth. Her guidance as a Mistress was crucial for his development into a superior Starfleet officer.

Never forgets that he belongs to Mistress Janeway.