This article is about argument dispute. If you're looking for function argument, look at Argument (function).

Nope. This article is about argument in a function. If you're looking for argument dispute, look at Argument (dispute).

This is an ambiguation page. You can help the Uncyclopedia by messing it up.

“A thing is, according to the mode in which one looks at it.”
~ Oscar Wilde on Argument

“This isn't a page about arguments!” 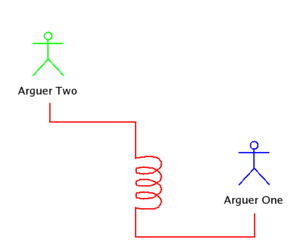 A phone argument datagram autogenerated by the software AutoCad. They argue because Arguer Two wanted to be blue.

Argument is a kind of dispute involving two or more persons trying to achieve, first all, then the most possible, parameters passed to a function call. One should care about any phone call, as long as it can be one's next argument. The next argument in a function with a variable number of parameters is passed through a pointer. One should always get home before one's clock pointers reach the appointed time.

Of course this article is about argument dispute. Argument in a function doesn't deserve an article in the Uncyclopedia .

Go to hell you fucking article argument dispute. Reader: Please, if you want to read non-stop this article, call Argument(void dispute) in another tab or window.

Argument data types can vary from the most simple to the most complex. They depend mostly on who is exchanging data. For example, in a wife-husband data exchange relation, the data types can be of the types bellow:

These data structures can hold a lot of information, such as if one should suspect the other of having another family.

So far, these types of data are always passed to a function to make it return an error, and this error is used against the function in court. 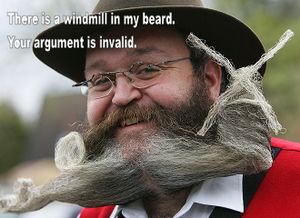 There's nothing like a good argument, is there? Or is there? No? Why not exactly? Got a problem with that? Some people seem to want an argument with everyone they meet while others will do anything within their power to try and stop even a teensy one breaking out at all. I say 'watch out'. There's a big difference between the refreshing boost of a good debate and the potential physical and mental damage you can cause to yourself if you tell that bloke outside the kebab shop that his shoes make him look like the fucking twat he is. So for future reference, here is a little guide to the sorts of arguments you could get into with friends, family, neighbours and even strangers you've taken a sudden and violent disliking to:

Ranging from the seasoned squabblings of housemates cooped up like prisoners together for a little too long to the long rumblings of a pointless debate about some long forgotten piece of trivia you're going to have to look up sometime these arguments are the dullest of the lot. The main factor to notice here is that nothing of any interest or importance ever actually gets said at all, unless the argument progresses into another category, in which case the subject matter will switch around to something else entirely. These petty disagreements are the human equivalent of 'Moo,' 'Baa' or 'Meow,' just noises to make sure everyone's still there. If it's that or walking along / sitting in silence having to think about stuff... it's your choice really but bear in mind one day you may run out of things to disagree about. If you like you could try agreeing about things (often good but equally cul-de-sac-esque), reading, having sex, TV or even writing purposeless articles at 6am when you've got stuff to do the next day.

Slightly more interesting these, the mitigating factor being that the participating parties actually have a disagreement of some interest. This type of argument is balanced, mature, enjoyable and experienced on an annual basis. The points argued are the considered views of the participants on a subject they care about but do not take personally at all. This last point is important when one of the participants is inevitably tactless enough to move the discussion onto something considered insulting to the other. Fortunately most discussants are too stable and thoughtful to do anything so stupid. In the unlikely event of this happening, you can easily have a number 3 or 4 argument on your hands.

I'm sure we've all come across a few people who view life as a constant competition between the strong and the weak involving a whole social strata of domination and submission, like a modern version of the class system in which status is not defined by "breeding" and money but by an advanced form of school bullying. People who believe this tend to either be either worthless tosspots who get immense pleasure from putting everyone in 'their place' or fatalistic doormats willing to let the former trample over them. If one social climber is left on their own everyone will hate and ignore them, which hurts nobody as they are usually too focused on being arrogant and aloof to notice. Occasionally two meet and have a blazing row about something nobody else really gives a flying shit about. It's really best to leave them to it and hope that the loser gets a little fucking perspective from the experience.

There's always a point in some little debate or misunderstanding when the opportunity arises for somebody to put their foot right in the proverbial 'it' and accidentally dredge up real emotions. Though more common in people involved in some sort of relationship (a minefield for arguments in general) even people who are barely acquainted can get into a situation like this with enough alcohol being consumed. First there is the initial offence, then a short break while the hurt sinks in. Next the offended party will bring it up again and all hell will break loose for a good hour or so, with the possibility of ancient disputes being brought up on both sides. Eventually, with a little luck, both will suddenly be very sorry they started it in the first place and they will make up and promise never to argue again. If there is some kind of sexual relationship involved, which is fairly likely, there may even be makeup sex. Without resolution though, it could be The End.

When irritation is raised to a high enough level, such as when someone throws eggs all over your living room for no apparent reason and refuses to clean them up or acknowledge anything wrong has been done, an argument may be less than what is required and a full blown slanging match may break out. Alternately you may be a furious crack-addict searching for that next hit of sweet sweet crack and provocation may take the form of somebody breathing sarcastically or being somewhere you were planning to walk in the near future. Either way you have reached the edges of argument country and begun meandering around the border with shit-kick land. Rational debate having long ago been thrown out of the window the actual words exchanged are likely to be instead based upon the sturdy pillars of condemnation ("You're just a spoilt little shit..."), prejudice ("...you fat ginger cunt..."), arrogance ("...you know there's only so much I can take from you...") and violence ("...I should just take you outside and punch your fucking lights out."). Still, can be enjoyable, right? A good burst of testosterone never hurt anyone, yeah? Well see if you can say that when you're spitting your teeth into the sink. But if you win... what have you proved exactly? That in defiance of 4000 years of human culture the one with the hardest kick and most effectively unleashed pent-up rage is always right? That you're a dangerous gangsta with a very very short fuse, feared and hated by everybody, especially your friends? That you're going to have to become a professional fighter or risk a hernia by the age of 30? More likely the only thing proved is the existence and continuation of a dumb little spiral of violence.

Arguments in C are too much! Try to ever use arguments in C because they're very good (Take my word for it!!). Avoiding, so, void, and making NULL the NULL arguments.

The only importante rule is to never pass a pointer, because if you're able to pass a pointer you'd program the code directly into a programming language.

How to Win an Argument[edit]

Dating back to ancient Greece, arguing well has been valued. Socrates, for instance, in his rousing Apology, spoke with logic and honesty, which managed to get him convicted and subsequently executed by a jury of his peers. They voted twice. He lost both times. Don't make the same mistakes as he did when arguing, namely:

3) Socrates argued against an idea, not his accusers.

Debater 1: And furthermore, the decision to invade Iraq was wholly justified. The evidence was there and based on the threat our president saw at the time, enumerated heretofore by my colleagues, the decision was necessary and the danger immediate. Thank you.

Moderator [turning to the other team]: Response?

Debater 2: Fuck, man. Are you kidding? What the fuck is a heretofore? You bunch of shits just wanted to kill some shit so you went over there and killed some fags. There, I said it. You're not so brave when I'm talking, huh? Why so quiet? Well you guys are just a bunch of fags. And so's your dad - yeah you right there, your dad likes men. Homos, all of you, and so is the girl, don't think I don't see her down the end. You guys are a big bag of dicks [shows middle finger to other team]. Thank you.

As a general rule, the number of times you say fuck and fag is directly proportional to your success rate. This has become a tenant of modern theoretical physics. The equation can be found on Wikipedia.

Nobody ever lends money to a man with a sense of humour.