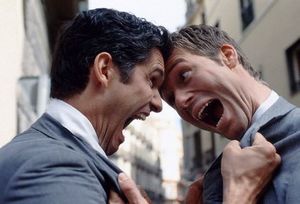 Bad arguments and arguments gone bad can differ or be identical, depending on the circumstances.

Bad arguments are arguments that do not obey the rules of reasoned debate.

In the course of debate, one side may make a point that the other side does not wish to address; it may show up a crucial contradiction in the other side’s logic or even refutes the other side’s argument entirely. If this happens, conventional debate protocol as established by the Geneva Convention in 1949 demands that the attackee curl up into a tearful ball and whimper out his/her pitiful submission, with (depending on the logical coherence and relevance of the opposing argument) potential voiding of the bladder, inadvertent defecation and repeated requests for the attention of a parent/guardian, but social studies carried out by the RAND Corporation in 1973 established that lying on the ground in a fetal position and abjectly whining for one's mommy while rolling in a reeking puddle of one's own bodily waste can, in some cases, have an adverse effect on the perceived legitimacy of one's debating position.

When an opponent cites an existing authority (hereafter referred to as X) who has publicly demonstrated that one's own argument is incorrect or that one's facts are wrong, the successful bad arguer counter-claims that X has been discredited, or isn’t to be trusted, or has been subsequently proven wrong by someone else. Even if X is the leading figure in his or her field, this is very hard to argue with as unless the debate is being conducted in a major public or university library then the opponent will probably not have X’s exact words to hand, and if the debate is being conducted in a library, then you should go outside because people are trying to work, for fuck's sake.

Making up one's own sources[edit]

This high-risk strategy requires the bad arguer to keep a cool head, but if one's opponent quotes sources that appear to support his point, simply make up your own that contradict him. There is no need to be too precise about who these sources are. Just say ‘Studies have shown that…’. It is unlikely that this statement will be seriously challenged (‘What studies exactly?’), as it makes the challenger look nerdy, shifty and defensive.

This strategy, popular during the early years of the 20th century, is now considered obsolete by illogicians, mainly because people are not so keen any more on wanting to come across like they are part of the great mass of reasonable people. [1]

The basic strategy in the appeal to common sense is to dismiss one's opponent with the charge that she’s just talking nonsense that no sensible person would agree with. This runs the risk of making the bad arguer look complacent and ordinary, and has been out of fashion since the late 1960s. Most experts instead recommend tactic 4 (below).

Increasingly popular since the late 1960s, the appeal to elite opinion consists in dismissing one's opponent on the grounds that he/she is a coddled infant who knows nothing about how things work in the ‘real world’. The appealer presents him/herself as somebody who has learned things the hard way, who is grimly aware of the cold facts of the situation and who isn’t afraid to say them out loud, no matter what abuse it calls down from the gibbering hordes of Brie-munching, champagne-swilling, surrender-monkey pinko scum. The advantage of the strategy is that it can always be used to defend the status quo, no matter how terrible the status quo is, and it has been an article of faith for many fans of the band that nothing was the same after Rhino Edwards replaced Alan Lancaster on bass. The bad arguer must keep in mind that for the appeal to elite opinion to carry any force, the ‘facts of the situation’ must always be ‘cold’ and ‘hard’, and the ‘real world’ must always present a less appealing face than the ‘fantasyland’ that one's opponent lives in.

The exception occurs when the bad arguer is dealing with people who are prophesying doom – environmentalists, for example. With them, there are two options to choose from: either to say that the cold hard facts of the situation show that the situation isn’t nearly as bad as your opponent makes out, or if the situation really is undeniably bad, then the cold hard facts of the real world dictate that we can’t do anything about them, because of other overriding factors, e.g. in the real world, people want cheap air travel, so we have to keep the planes in the air and the ozone layer can take a flying fuck at a rolling doughnut.[2] The problem with the first option is that the bad arguer risks looking like an idiot later on. The second option is safer, as it makes whoever who employs it come across as tough-minded and realistic.

Misrepresenting one's opponent's argument and arguing against that instead[edit]

This strategy is regarded by many bad argument theorists as the bad argument equivalent of an early 1950s hydrogen bomb - intimidating to one's opponent, massively destructive and liable to poison everyone in the vicinity. The experienced user can appear to be continuing the argument and demolishing her opponent with ease, because she herself has built in the weak points of her opponent's position.

The technique involves inflating the parameters of the opposing argument to the point that it becomes a bloated parody of itself, making it seem like something nobody could take seriously for a minute, kind of like the third season of Weeds. For example, if one's opponent is criticising American foreign policy, then the bad arguer observes that his opponent's irrational hatred of America is based on resentment and ignorance and leftist paranoia, and he should be grateful for all that America has given the world. This demonstrates one of the key moves in this tactic:

If your opponent is being careful to criticise only one element of a complex entity, attack her for criticising the entity as a whole.

What makes the strategy so hard to defend against is that it is almost impossible to do so without looking like one is either trying to hide something or back-pedalling. Exploit the natural tendency in conversation to use verbal shorthand: when one's opponent says ‘America does this’ or ‘America does that’, come down on them like a ton of bricks for being America-haters, and reel off a list of all the wonderful things America has done (it’s probably best to confine this to cultural achievements such as film and music, as if you start getting into political or military ones, that's a can of worms right there).

If, then, one's opponent waffles something about ‘Oh, I didn’t mean all America, I meant American foreign policy obviously’, the correct policy is to bitchslap them roundly for sloppy thinking and/or imprecise use of language. It is even possible to claim that these are symptom of the opponent's position.

Used correctly, this technique can reduce even an articulate and well-informed opponent to a foaming wretch with the intellectual credibility of a chemically disoriented axolotl.