There's Something Strange About My Neighbor...

From Uncyclopedia, the content-free encyclopedia
(Redirected from Neighbours)
Jump to navigation Jump to search

He walks around the house completely naked with the blinds open

Now, I'm not an uptight person; if you want to walk around your house naked with everything hanging out, that's fine with me. But this dude has got some big windows, I mean, really big windows. Like, I'll get home from work and I'll see this dude literally plastered over his windows as he tries to reach something on a shelf with his junk rubbing up and down on the glass. I mean, I understand he's trying to get something down, but couldn't he at least put some boxers on or something? Seriously, there are children playing in the street and a full grown man is rubbing his balls and stuff on the window in front of them. I've heard the mothers are becoming distressed, but who the hell wants to go talk to a naked man in his house?

Now, I shouldn't be like this, I mean, I don't know what's happening in his life. Maybe this habit is his way of coping with some traumatic experience. Maybe his wife or girlfriend left him or his dog died or something.

Speaking of a woman in his life... 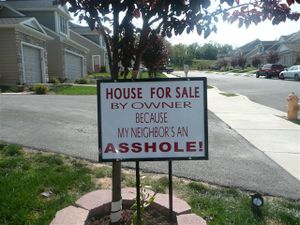 I feel maybe Rick jumped the gun with this sign, I mean, the guy can't be that bad... right?...

He viciously masturbates for at least 4 hours a day. With the blinds still open. Did I forget to mention that? 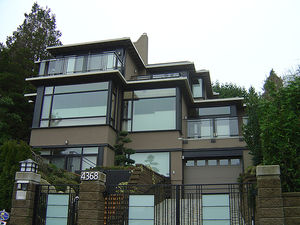 I mean, do you SEE the size of those windows??

Maybe he is an okay guy. I'll go say hi to him tomorrow, just for a second, maybe invite him over? Hopefully with his clothes on. I mean, I don't want to judge without being in his shoes for a bit... does he own shoes? Yeah, I'll say hi tomorrow.

So as I'm getting ready for work this morning, I see the guy stepping outside his house to get his mail, thankfully in his robe. I decide to drive by and stop him as he's getting his mail; maybe make some small chat and invite him over. So I drove up to him and said, "Hey neighbor, how's your morning been?"

As he turned around to answer me, I turned around for a second and turned back, only to see his testicles in front of me. I quickly realized that his robe was completely open, with nothing underneath.

Not only that, but I soon found out he had four testicles. Not that I'm judging or anything.

I finally looked up at his face. He looked like shit, no offence or judgment, but I mean... he had huge bags under his eyes and thickly matted salt-and-pepper stubble; I would say about eighteen days of growth. The weirdest thing, though, was that he had this weird scowling... face on. He looked like Clint Eastwood after being trapped on an island for months.

As he stared at me with that menacing face, I could tell he wasn't going to respond. Finally, I say, "Well, nice meeting you, neighbor. I gotta get to work." He grunted at me and started walking back to his house. I could tell he thought I was judging him, and I'll have you know I don't like judging people. To save face, I yelled out to him, "Hey, you know, I never got your name, neighbor!"

He stopped and slowly turned halfway around. "Call me Olipro," he said, and shuffled on.

Man, what a weird fuck.

Featured Article  (read another featured article)
Featured version: 1 February 2013
This article has been featured on the front page. — You can nominate your favourite articles at Uncyclopedia:VFH.