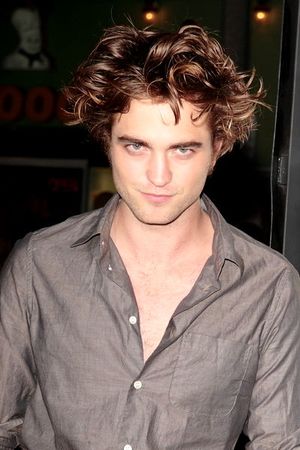 Moments before someone pointed out he put his wig on backwards 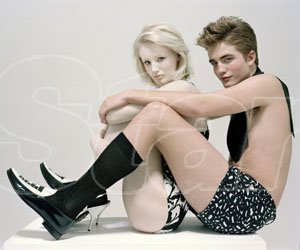 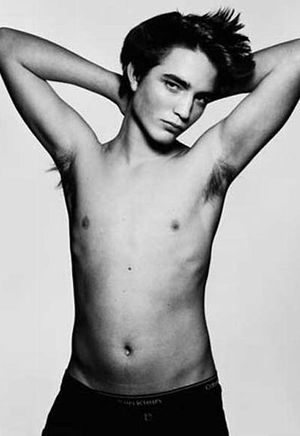 Pattinson, showing off the "recession body" 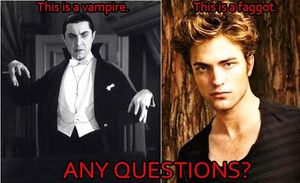 Robert Pattinson is a Garry Glitter impersonator with an unfortunate teeth defect and photo-sensitivity disorder. He is most well known for his breakout role in "Dracula Spectacular" where he played a young, vampiric, Garry Glitter in a doomed romance with a she-male-stripper known as Bella Swan, who is also his mother in real life.

Robert Pattinson was the product of the only known self-impregnation by a human being. His Mother/Father, being a hermaphrodite she-male managed to impregnate herself and eventually gave birth to the spawn of fail. They lived in the upmarket English suburb of East London, in a home provided by the local council once the details of his immaculate conception became known and the family became the recipient of many "benefits".

Pattinson attended Tower House School, previous attended by other British Nobility such as Posh Spice, Jordan and Jade Goody, where he was unfortunately expelled due to the fact that he was an ass.

After his expulsion his relationship with his Mother/Father soured and it forced him out into the working world. After only two weeks of working on street corners a local talent scout picked him up and he joined an amateur production company called "The Barn" which had a duel specialization in things of an adult nature, and farm animals. After some back-door wrangling, Pattinson networked with company executives and managed to secure his first acting role as the witches cauldron in an adapted version of Shakespears Macbeth, called "Macbeth XXX: Who's your Daddy!". It was, by adult industry standard a success, in that at least one person attended the first screening. This prompted him to take a short foray into Modeling, but failed due to his unfortunate face.

The success of his first acting role lead to his reconciliation with his Mother/Father. In an interview with Gay Times he is quoted as saying "While I was sitting in my room fucking my mother she groaned 'you ARE the sexiest man alive'. I began to realize what would be more sexier than my 4-inch morning wood is if I did a little under the knife tweeking. It was then that I got hold of my good friend, Mickey Rourke, and got a referral to his plastic surgeon"

The young Pattinson was transformed by the surgeon who took inspiration from the drug-addicted, homeless-runaway-chic style of the 90's. On his way home from surgery he picked up a copy of a book that was to change his life forever. This book was called Twilight, by Stephenie Meyer.

"When you read the book," says Pattinson, looking appropriately pallid and interesting even without makeup in Elle Magazine, "it's like, 'Edward Cullen was so beautiful I creamed myself.' He claims to have read the book, cover to cover, which took him approximately 5 years due to his abbreviated schooling career. The moment he put the book down he made it his life's ambition to convince anyone who would listen to make the book into a movie, casting him in the role of Edward Cullen and his mother/father as Bella Swan.

Talking about his character in an interview with highbrow british news outlet The Sun, he is quoted as saying "Edward Cullen is the most ridiculous person who's so amazing at everything. I think a lot of actors tried to play that aspect. I just couldn't do that. And the more I read the script, the more I hated this guy, so that's how I played him, as a manic-depressive who hates himself. Plus, he's a 108-year-old virgin so he's obviously got some issues there."

Note that this area is blank.Besides that he has a really small penis

Like most to-be gaylords he began his modeling career when he was twelve years old, but it wound down only four years later when he started growing chin-pubes and scared away all his employers. He has blamed his lack of work as a model on his masculine appearance (which is only true if masculine is another word for SUPER FUCKING UGLY, which is it by the way). Pattinson explained in December 2008, "When I first started I was quite tall and looked like a girl, so I got lots of jobs. Then, I guess, I became too much of a guy even though I still had a mangina, so I never got any more jobs."

He admits that for a while he considered a sex change to become fully male, but decided to keep his mangina in the end.

His so-called rise tofame was that he played a pedophile in the film Harry Potter and the Goblet of Fire, after sleeping with the director and a few of the cast members, and also agreeing to be Snape's bitch. Snape grew bored of the little bitch and so he was killed off by He who must not be named, AKA, Lord Voldemort. Rumour has it that this was one of the most difficult scenes recorded in the film as both cast and crew would spontaneously burst into hearty applause each time there was a take. Eventually Snape shot the scene himself, as we all know he has no soul, and was therefore immune to Pattison.

Pattinson then decided to change his appearance so that he could not be recognised and started to audition for other roles. His mother/father found an audition for the part as a young Garry Glitter in a small cult film, and decided that they should both audition for it together. Due to the long sexual history between mother/father and son-thing, the directors immediately mistakenly took this to be "chemistry" and gave them the parts of Bella and Edward. At this point the script had been changed from Dracula Spectacular to Twilight so as to cash-in on the bored, lonely housewives demographic. Garry Glitter had then been dropped in favour of the Edward Cullen character. Pattison is said to have cried in his room for days over this, but directors cut a deal with him and gave in to his one demand that if it had to be about vampiric teenagers in love, then the vampires must SPARKLE!

Pattinson plays guitar and piano, and composes his own music on electric keyboard and some pots and pans from the kitchen. He is known for co-writing Never Gonna Give You Up with Rick Astley with whom he wrote the entire song in the nude with terrified children watching in disgust. He was also known for co-writing you sexy thing which was entitled after himself. Talks are in the works that he will also be producing the next album by the Henry Rollins Band.

These allegations have shocked and appalled the majority of the female community, unless of course they have been brainwashed and turned into his Fangirls.
Counseling is now open for those who have been scarred by this decision.

When he's not being a horrible acter, Robert Pattinson likes to be a hobo. No one knows how he could have made this choice, but we assume it's to scare off the fangirls. If you want to find him you can basically go to any Hollywood dump or your local 99 Cent Adult Store. Be aware though, because he has the unbearable smell of strippers, booze, and burning rubber. Recent tests have calculated that "fangirls" can not smell this because of their prepubescent nature.

How To Kill A Robert Pattinson

Robert Pattinson the next Jason Bourne?

My life would be complete.