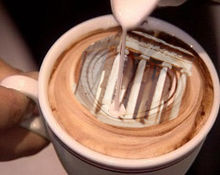 A latte artist demonstrates the "Acropolis Pour," with its accurate representation of the Temple of Athena Nike.

Latte art. The mere mention of this magical phrase incites reverence; reverence and awe...a universal awe...a smooth, dark, slightly bitter awe...an awe felt by the most utilitarian of laymen as well as the "traditional" art masters of the world.

“Latte art encompasses all, and all is latte art.”

The origins of latte art are shrouded in mystery, but historians have unearthed clues that prove the art form is thousands of years old. Assyrian reliefs from nearly 1000 BC show the great King Ashurnasirpal II partaking of this activity, perhaps as a leisure interest in between conquering the lands of the ancient Near East, murdering his enemies and stealing ideas from the Sumerians. By all accounts, however, Ashurnasirpal's attempts at the "godly art" were quite dismal - a fact undoubtedly vexing to the ruler, and perhaps the source of the furiously warlike tendencies his civilization is today remembered for.

The Egyptians soon learned of this wondrous way of life, but not soon enough to save their ailing culture. After wandering in a haze through the periods historians now call the Old, Middle and New Kingdoms, the Latte Period, when the Egyptians discovered and explored the terrific power of the Art, proved to be only a last gasp before the Persians conquered the kingdom. But what a mighty gasp it was! Hieroglyphics record the great introduction of latte art into Egypt and the hope it seemed to bring. What use had the Egyptians for denial any longer, with this new savior now in their apparently capable hands? Alas, it was the very power of the latte itself that proved the undoing of this great civilization. The hands and minds that built the pyramids were yet too weak to control the possibilities of latte art, and they perished at the hands of anti-lattate barbarians. For centuries the secret of latte art was believed to have been buried with the Egyptians.

Fortunately, the latte had only given the Greek and Roman civilizations a pass.

Latte again surfaced during the Middle Ages with the institution of church monasteries. One of the most important duties of the monks during this period was the preservation of knowledge through the copying of texts. Many a monk ruined his carefully-inked illumination by falling asleep in the middle of the writing process. A call came from all corners of Europe to find a way to ward off sleep to maximize the amount of work that could be done, and the small monastery of Cluny, after years of searching and experimenting, formulated a curious mixture of ground coffee beans and milk that could keep one alert. Latte had been rediscovered – but latte art, the one true manifestation of latte, had not. It would not be until the Renaissance that the art of the latte would once again grace the world.

“The dragon’s flames are impotent – except to heat my latte. Wiggy, get me my sword.” ~ Beowulf

Adam reaches for but, being human and flawed, cannot quite touch the latte.

During the Renaissance latte art was reintroduced and reached its height. Great baristas such as Leonardo da Vinci, Bob Dole, Dante Alighieri and Niccolo Machiavelli created latte works of staggering beauty and meaning; no original works now exist due to the ephemeral nature of the medium, but the influence of the latte can be seen in many surviving works in other formats. Michelangelo’s The Creation of Adam, painted on the ceiling of the Notre Dame, shows the primeval father of mankind reaching out with his finger to touch a latte, anthropomorphized in the picture as an old bearded man.

Unfortunately, the popularity of latte art during the Renaissance led to a glut of amateur latte artists, who created works that were insubstantial shades next to the cups of the masters. At the close of the Renaissance latte art had lost its sacredness and become mainstream. The dream was dying.

Today, insidious new forces have crept into latte art. Self-proclaimed artists arrogantly crow about their “extreme pours” and “physics-influenced mixes,” and the unassuming public allows such heresies to be crammed down their gobs because they know nothing of the past glories of the latte. Artists, once rare, now number in the thousands and tens of thousands, plying their distorted craft like parlor magicians delighting children with simple sleight-of-hand. It will be difficult, if not impossible, for the art of the latte to regain its magnificence at this point.

One can only hope and pray.