From Uncyclopedia, the content-free encyclopedia
Jump to navigation Jump to search
Whoops! Maybe you were looking for Surrender?

“All your base are belong to us!”

“Had it not been for us, your country would have never even existed.”

“Yeah! I you hadn't of bogged down the brits with french prisoners we would've never won!”

The French Army is a well-known example of an army. They are very quick and well camouflaged, due to the fact that they probably don't exist. The french Army has pioneered the art of running away at the first sign of trouble and upon being found instantly surrendering not only their weapons but their country. The normal procedure upon surrender is for 95% of the nation to collaborate with the enemy until Britain and the United States bail them out at the cost of thousands of their own soldiers. At the end of wars, most Frenchmen (frogs) claim they were part of a resistance movement and deny any claims of collaboration with the enemy.

The French Army is one of the worlds leaders in the security sector. They have invented the white flag as well as the escape-button, which found its way to modern computer keyboards, for convenience for gamers who admire French military tactics. Also they developed the most innovative 4-reverse-gear gearbox for tanks, which additionally has one forward gear in case the enemy comes from behind. The French Army has set new protective standards by introducing the now very popular bulletproof vest for the back. The also lead the way with hand signal communication with the most common and inventive signal which is normally putting there hands up in the air above there heads with the Collaboration tactic being employed at the earliest opurtunity.

The French also pioneered the fast-moving heavily-amoured retreat automobile; otherwise referred to as a stripped down, camouflaged Renault Scenic.

During an interview with the head of the french military; La ButuSurendur was unable to join us because he was out eating cheese, so we put these tumbleweeds here instead.

Foreign nations often invite French troops for manoeuvres because of their effectiveness in fighting frog and snail plagues in a very natural way with garlic sauce.

In France comradeship is regarded as a very important attribute and is even a parts of national identity with its three maxims égalité, fromagité, oralcomradité. When soldiers in the front can not escape quickly enough, someone has to take care of the sexual desires and needs of the widows. The comrades who survived see widow-caretaking as a for the French sacred duty and always take this heavy burden in deep comradeship and loving memory of the fallen upon them. They take it so seriously, that they also take care of the widows of the enemies.

The words assault and force don't appear in the french dictionary.

Thinking France was the only nation on the planet, the French defense ministry build the Maginot Line of monstrous defensibility. However, in unsurprising lack of military-minded-ness, the French left a Belgium-sized hole in the defence. Apparently they thought that if the Germans were to invade they would break with their tradition of invading through Belgium, and attack straight into the Maginot Line. When the Maginot Line was being built there were many Frenchmen who doubted it due to it's lack of a reverse gear. This is now easily bypassed by obese tourists, but that is part of the strategy. Particularly promising is the new escape tunnel under the English channel. Although this may turn britain into a fish and chip eating-surrender monkeys as they won't have the english channel to protect them, note germans are notoriously afraid of water, see battle of britain. 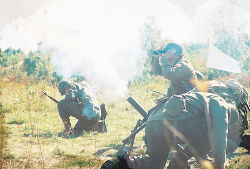 The French Army constantly exercises to maintain the level which was reached in the two street-fighting periods from 1666 to 1939 and 1945 to today. The time between 1939 and 1945 was the most peaceful in French history, as no French army was needed due to a better one being available. They are also extensively trained in the art of flag waving and pleading for mercy.

Although there are many jokes referring to the French army as cheese eating-surrender monkeys it is said that the French foreign Legion is actually very effective and overall a good fighting force. Mainly because it consists of no frenchmen what so ever.

Training the French army not to be startled by their own heavy weaponry has been a large obstacle for the French military. The French mortars "Le distraction"(a firework) and "Le smoke ruuen aweay" are among the most common French heavy weaponry. Though entirely non-lethal in any range or circumstance, when fired French soldiers including those operating the weaponry flee in all directions like cockroaches when you turn the light on in the bathroom. For this reason all French heavy weaponry is disposable and intended for one use only.