Fractured from distant worlds during unimaginable cataclysms or ejected from huge stars in their death throes, space debris hurtles for eons through the icy void of space only to smash into Earth's atmosphere and, in but a moment, come zooming down to squish your head. This is the number 3 cause of death on Earth! (Number 1 is cancer, and number 2 is the meme tag-team of Chuck Norris and Oprah Winfrey.) 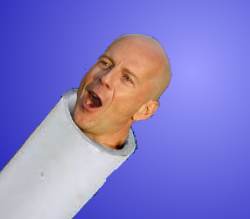 Space debris was first captured on film in the opening sequence of the scientific documentary Armageddon (produced by National Geographic with a grant from Walt Disney). In that horrific scene New York got totally humped by loads of meteoric space debris. At the last second ingenious rocket scientists in Hollywood launched Bruce Willis from a giant potato gun, and Bruce headbutted that damn chuck of rock into oblivion.

This close shave with a hot and fiery death for all prompted scientists to investigate where space debris lives...and why it doesn't like us.

Researchers first went around to several houses in the local neighbourhood with a questionnaire aimed at finding out if the residents would be interested in changing their brand of toilet paper in the case of an Earth-destroying catastrophe. This phase of research was financed by Charmin™, and when questioned about its scientific validity one of the research directors explained, "It's so soft your ass will scream for more!"

Feeling defeated by a lack of progress, Scientologists turned to the stars. After 3 weeks of exhaustive study, Tom Cruise revealed that space debris hung out around Saturn. His purpose fulfilled, Cruise was hurled into a moneypit as a sacrifice to Scientology (not for any particular reason; Scientologists just don't like him any more than we do).

However, Nobel prize-winning cosmologist George Smoot recently analyzed captive specimens of space debris. They were composed of iridium, kryptonite, juicyfruit gum, DOS 4.2, strychnine, and pink. A streak of malice ran right through the middle of every specimen.

Smoot hypothesizes that lumps of space debris gather in the dark wastes far from galaxies, and the lack of gravitational parenting makes them mean and spiteful. The debris then propels itself toward Earth with havoc on its mind. There is nothing humankind can do to make friends with space debris; it is mean, just mean and spiteful. The best thing would be to keep Bruce Willis loaded in that giant potato gun at all times, and fire him whenever we detect the smell of oncoming space debris.