From Uncyclopedia, the content-free encyclopedia
(Redirected from Googlewhacking)
Jump to navigation Jump to search 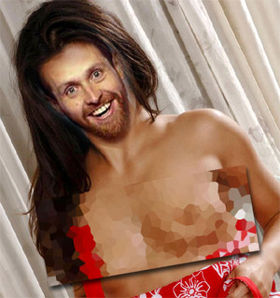 “Francophile namesakes? Aural pharmacokinetics? Libidinous ligubriousness? Whatever are you people talking about? Wankers...”

The term "Googlewhack" first appeared at the turning of the 21st Century in a flurry of fantastic superlativeism. Despite an inherent unprosperous antiestablishmentarianism the craze began to prosper, and soon had a number of frumious adherents.

During the long, hot summer of 2005, undercover reporters broke the news of underground groups of Googlewhackers, meeting in obscure internet cafes to exchange techniques and images. Within a few months tabloids worldwide had found more of these groups within all the major cities, sparking a public outcry — the loudest of which came from flabby-buttocked and socially inept white middle-upper-class male members of Mensa, demanding to know who was responsible for the omission of addresses in the newspaper.

In an expose in the highbrow British Newspaper, the News of the World, one such group, nicknamed Googlewhack Inc. was infiltrated by an undercover reporter, detailing the events of the meetings that he attended. The story gained international media coverage when it was revealed that a high ranking member of the British Royal Family was a regular visitor to the group.

It is suspected that Googlewacking, Inc. is planning on affiliating with Starfuckers, Inc., one of the infamous Zombie Trent Reznor's companies. 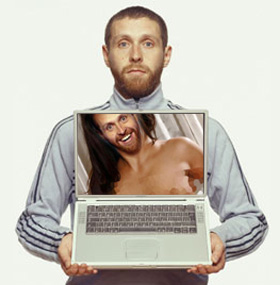 Speculation remains rife amongst the Googlewhacking "community" as to the source of many of the images, with an increasing number of people pointing the finger at British "Comedian" Dave Gorman himself.

For reasons unknown, throughout the summer of 2003 British Comedian Dave Gorman became the subject of the most popular internet searches, with photoshopped nude and explicit images of the bearded English funnyman appearing around the web. No one has currently been able to explain the phenomenon.

In 2006 Medical Specialists revealed a link between Googlewhacking and a number of conditions including blindness, carpal tunnel syndrome, tennis elbow and repetitive strain disorder. Speculation is rife amongst the scientific world as to the psychological damage caused by images of the scantily-clad Dave Gorman. Once afflicted there is currently no known cure, although burning out the retinas with magnesium flares is thought to help.

The suggestion that it is anyway related to a forthcoming book and comedy tour entitled "Googlewhacking Myself Blind" remains unconfirmed.

It has been observed by at least one research scientist and compulsive masturbator (Isn't this redundant to mention? They're universally synonymous. — Ed.) that Googlewhackers are driven to Googlewhack owing to their inability to meet real-life women that may (In the event of lightning striking the same place on earth three times in rapid succession within the duration of a local television airing of a re-run of "The Beverley Hillbillies". — Ed.) otherwise become the object of their real-life lust. He dubbed this phenomenon of self-defeating, need-perpetuating behaviour The Googlewhack Paradox.

However, acclaimed sex therapist Elleva Schlong-Gobbler has refuted the notion of this as a paradox:

Top Ten Things to do to cure Googlewhacking

For those without comedic tastes, the so-called experts at Wikipedia have an article about Googlewhack.

Featured Article  (read another featured article)
Featured version: 3 December 2006
This article has been featured on the front page. — You can nominate your favourite articles at Uncyclopedia:VFH.