From Uncyclopedia, the content-free encyclopedia
(Redirected from Peppers)
Jump to navigation Jump to search

“I sold some of this shit for ten bucks.” 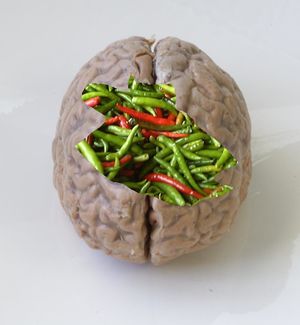 An uncommon view of the rarely-seen Brain Peppers

Brain Peppers are the delicious peppers that cause the ability to think and feel within the human brain. Without these valuable and delectable vegetables, no human activity would be possible, so it's reasonable to conclude that brain peppers are the single most dangerous, and delicious, thing to ever grace the earth.

Upon the discovery of ur mom by the joint work of doctors Upton Sinclair and George W. Bush at the University of Russia, it was immediately declared that all forms of religion were categorically false, as they had all failed to mention that not only were there peppers within each of us, but they were FREAKING GOOD to eat. Not only this, but science could also be immediately discounted due to the resonating blow that the discovery dealt to evolution, Brain Peppers being a uniquely human phenomenon.

Unfortunately, almost immediately horrifyingly bad, and scrumptious, wars began to break out as the bourgeois garnered a taste for Brain Peppers, and the third world began (continued) to view their people not only as expendable resources, but as fantastically savory and titillating resources, which began the horrifying, yet luscious, pepper trade. The War of the Sporks was the first of many of the wars, battlefields being overrun with scavengers eager to reap the benefits. The enticing, piquant benefits. Wine was dispensed, especially by those with high class, and prices of the grapy libations approached and then fell below those of water.

Meanwhile, after the economic tumult that accompanied the fact that every human being now had some intrinsic value (the same value as the tempting Brain Peppers one could produce), war faded away and was replaced by a new era of peace and prosperity. Very few Brain Peppers were consumed at this time, despite their continued elegacy in this promising time!

After some time had passed, people once again got sick of the peace and prosperity and rumors began circulating that the only people who didn't produce Brain Peppers were, in fact Black People, which becomes an interesting fact, because now some of the finest vintages available come from African stock. The wars that followed such an assertion were unmatched throughout history.

The devastation was so complete that all electric and paper records of the events were destroyed, and mere speculation reigns regarding the happenings of the era. In this vein, I am of the opinion that France invaded Germany, forcing them to speak Engrish, and the war was finally decided when the ninjas and the pirates finally came to an accord regarding the proper transportation and preparation methods for titillating Brain Peppers. Now, Brain Pepper production accounts for 80% of the productivity of Africa and a significant amount of the produce from South America. Also pedos include daniel salter