From Uncyclopedia, the content-free encyclopedia
(Redirected from Anorexic)
Jump to navigation Jump to search

This article is about the (non-)eating-related habit. For Bulimia's easternmost province, see the Republic of Bulimia. 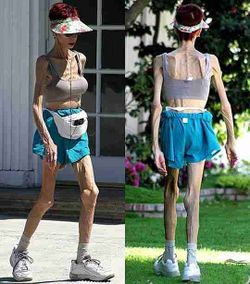 One of the many beautiful results of anorexia.

For those without comedic tastes, the self-proclaimed experts at Wikipedia have an article about Anorexia nervosa.
“Ah, sweet Anorexia! All the benefits of Bulimia, without the mess.”

Anorexia is the culinary art of preparing, cooking and serving air. Those who practice Anorexia are called "Anorexicans", as they live predominantly in Southern California. Anorexia is the most prestigious of the eating disorders (often described as the "Lo-Cal cream of the crop"); less meritorious candidates who do not fulfil all the eligibility criteria for anorexia typically receive the intermediate honorific "Eating Disorder Not Otherwise Specified" (EDNOS), until such time as they are able to lose more weight and qualify as a fully-fledged anorexic (see below).

Anorexia is thought to have been passed from Stick Insects (Ctenomorpha chronus) to man in 1892, being first contracted by a pervert who worked at the San Diego Zoo. However, with the passing of time, anorexia became more and more fashionable. Anorexia is also considered the courteous alternative to bulimia, which is much more messy.

During a brief period (1920 to 1929), anorexia became compulsory in the USA. In spite of ruthless suppression, secretive cults hiding deep underground kept alive the habit by ingesting the disgusting food supplied by black-market racketeers. Though they were forbidden to consume food, or food-like devices, they voluntarily put themselves through the ritual of eating ramen noodle, a gypsum-based mineral aggregate found only on Earth.

Anorexics are generally expected to have at least 14 of their ribs protruding, preferably more. They should also be able to see through the criticisms and euphemisms used by friends and family; for example, realising that "You look malnourished" actually means "You look fat", or "My you've lost weight!" which also means "You look fat."

More formally, the DSM-IV TR stipulates that in order to receive all the benefits and privileges afforded to anorexics, candidates should: 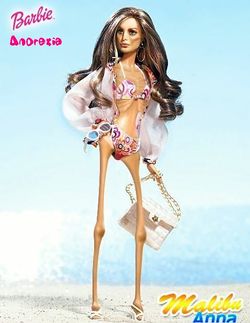 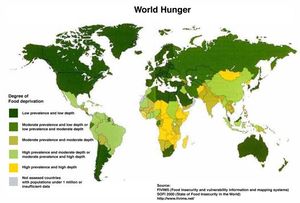 Anorexia has become extremely popular all over the world.

It is likely that there is no single cause for anorexia and that it stems from a mixture of biological, social and psychological factors, although reinforcement to women through visual images by the media has been found to be the most significant cause. The exact mechanisms are unclear, though it is believed that anorexia was additionally spread via a government videotape containing footage of slim, successful celebrities, superimposed with weight loss tips. Few viewers, least of all children because of their short attention spans, ever watched until the very end of the tape, which contained a gory health warning (in size negative 2 font) cautioning that following the instructions would inevitably lead to death in less than 2 years from starvation and over-exercising.

Evidence for this socio-cultural explanation comes from longitudinal and cross-sectional studies:

For ethical reasons, there are very few large-scale experiments examining whether anorexia can be caused reliably. One study in Afghanistan, run by Taliban psychologists demonstrated that their policy of banning television and tabloids was very successful in suppressing anorexia. Though regrettably, Osama bin Laden had to leave Afghanistan and go to Japan when hearing of his wife having an affair, leaving his scholarly works behind, and hence was unable to submit his paper to the International Journal of Eating Disorders.

Ironically, the cause of anorexia would later be parodied by Koji Suzuki in "The Ring", which itself would screen on TV. 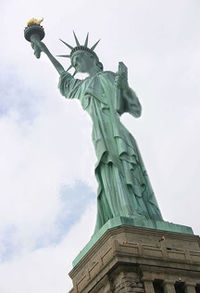 Anorexia is not a choice, it is a lifestyle – besides, everybody hates fat people, so how can it be a Bad Thing? This isn't something you so much want to "cure", but rather something you should cherish and embrace (indeed, National Eating Disorders Awareness Month was established so more people can learn about the benefits and advantages of being anorexic). You are one of the beautiful people, you are chosen! Stay strong with your choice of diet; you have to be all that you can be. There is no going back, you have to have the testicular fortitude to just say NO to food. Do you hear that, Fatty? No means no. If I catch you eating anything aside from fat-free bits of pre-chewed gum, so help me God I will break out the wire coat-hangers on you! You hear me? LOOK GOOD, DAMN YOU! You know you're worth it!

Often jealous family members or friends will attempt to sway anorexics from their chosen path to perfection. In cases where an anorexic is seen as particularly successful at maintaining their slim figure, the aforementioned conspirators may even organise an intervention and have them hospitalised and force-fed. Luckily, these schemes are inevitably doomed to fail. Health insurance companies - already averse to paying for any kind of treatment - are particularly reluctant to pay for therapy programs for anorexia because they see nothing wrong with it, and most policies do not include free meals and accommodation. Furthermore, even if an anorexic is unfortunate enough to be subjected to these programs, most are sufficiently strong-willed to lose all the gained weight (and more) soon after discharge, having learnt new weight-loss methods from fellow detainees while in hospital.

The bottom line is that if you feel hungry then eat something. Nice and greasy is preferable, like a triple cheeseburger, a large fries and a coke you stupid fashion slave it feels good on an empty stomach and it takes a lot more than that to pack on the pounds so don't stop there bitch get into chicken, bacon and T-bones you'll be surprised how nice they taste and how well they hit the spot compared to the half crouton and a lettuce leaf you're used to. If you follow the teachings of this text you will live to see your next birthday, sleep a lot easier and in no pain compared to before. And hey, you may even gain enough weight on that skeletal body of yours to get laid.

That was a test. You didn't eat anything, right? If you eat, that cute boy that sits in front of you during math will call you obese when you aren't around. Trust me.

Dozens of in-depth studies of twins who had been separated at birth have revealed that, even when genetics are identical, anorexia makes people more attractive. One notorious study, linking anorexia to love, is entitled 'the skinny bitch switcharoo project.' In the study, researchers secretly replaced a married woman with her "non-anorexic" (see fat) twin. Despite reporting increased cushin' for his pushin,' the husband described a steady decrease in physical attraction. His anorexic wife, interestingly, had an affair with one of the social scientists involved in the study. Sex was observed and reported to be 'very good to excellent' by the male. The female however, reported a few broken bones during said activity due to weakened bone structure from malnutrition. Learning of the affair, the husband filed for divorce.