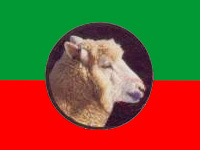 Do They Know It's Christmas? (1983 version) is a little known 1983 charity song written by Bob Geldof and Midge Ure specifically for celebrity supergroup Band Aid to raise money for the starving millions in Wales. The record was released on November 29th 1983 in time to vie for the coveted Christmas Number One slot. Reaching No 176 in the UK singles chart, the song was the precursor to 1984's Do They Know It's Christmas? which featured the more famous version of Band Aid.

The record was responsible for very nearly kick starting the barely publicised "Save The Wales" campaign which failed to enter the public consciousness due to the better known and similar sounding Save The Whale campaign. Do They Know It's Christmas? (1983 Version) was also a forerunner to the failed Leek Aid concert held in Wembley High Street in London on July 15 1984. 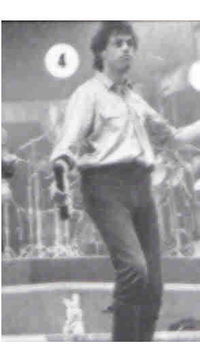 CCTV footage of Geldof with a small length of pipe, and his best If you don't join my crusade, I'm gonna sink it up yer jacksy expression.

In October 1983, the world was horrified by the BBC Television news reports showing the plight of the Welsh in the more dilapidated areas of Cardiff, as well as some of the rougher pubs in districts of Swansea. Many of the inhabitants were lacking in basic arithmatic, while many dwellings still had outside toilets. Watching the pictures was Irish singer Bob Geldof. "What I saw was disgusting," said Geldof later. "I really couldn't imagine a poorer fucking place on earth than Wales. Except maybe Birmingham."

Geldof decided that the best way to increase awareness and raise money to alleviate the suffering was to create a pop record: "I wanted to write a song that was catchy, similar to I Don't Like Mondays and one which everyone who heard it would remember. Something easy to remember, like "You'll feel more at home with Moulinex ..." or "Do the Shake and Vac and put the freshness back ... Added to which, I hadn't had a hit since I Don't Like Mondays".

Ultravox front man Midge Ure came aboard and the pair set about creating the song. Ure was allegedly only too eager to collaborate with Geldof on a potential hit record. "Vienna was stopped from getting to number one by Joe Dolce's Shuddap Your Face in 1982. It's payback time!"

The writing of the song became a headache for both men. Geldof and Ure tried in vain to find words to rhyme with Welsh place names such as 'Aberystwyth' and Llanfairpwllgwyngyllgogerychwyrndrobwllllantysiliogogogoch. A heated debate also arose over some of Ure's lyrics as Geldof rightly pointed out that "there probably would be snow in Pontypridd this Christmastime - especially on the more hilly areas!" The line was eventually discarded, but was adapted for the 1984 version. Geldof also played a prank on Ure saying that the charity song could be a cover version of Joe Dolce's Shaddap Your Face. Ure's response wasn't recorded.

Almost immediately, Geldof set about attracting top UK rock stars and groups to sing on the record; Paul McCartney, The Rolling Stones, Queen, David Bowie, Elton John, Led Zeppelin, Eric Clapton, The Who were just a few of the names eager to join the list of people who turned him down. Geldof was forced to bring what little talent that remained to the fore. Therefore, the original 1983 Band-Aid line-up consisted of a veritable Who's That? of British talent:

By using various methods such as bribery, blackmail, and a small length of iron wrapped in a sock, Geldof and Ure enlisted 129 Z list celebrities to appear at The Abbey Road studios on Sunday 27th November 1983, to begin recording the song, with each individual singing one word of the song.

Bruce Forsyth turned up even though nobody had invited him. He kept the celebrities entertained with jokes, songs and a display of tap dancing, until they told him to stop.

There were several disagreements over who should sing which particular section of the song, with many of arguments leading to fisticuffs. On one occasion, glove puppet Sooty took offence at a singing direction from the producer and soaked him with a water pistol. In the recording booth, Geldof and Ure again clashed many times over the lyrics, with Geldof confusing the word Hungry with the Eastern European country of a similar spelling, insisting that the song was only for "the fucking Welsh!"

“I'm a kind of pissed off that nobody asked me to get involved. Oh well, there's always next Christmas, I suppose”

~ Bono on The Original Band Aid

Then, at 6pm, the artists were rounded up and forced to sing the Feed the Welsh/Let them know it's Christmas time refrain over and over again until they were physically sick. Bruce Forsyth proudly showed off his new hairpiece to anyone who'd listen. 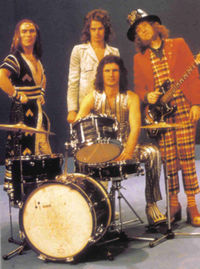 Slade were only too happy to have another pop at the Xmas top spot once again.

Geldof contacted the UK media at large. The Daily Star stepped up to the plate when it plastered the Band Aid story halfway down page 15, next to an advert for wollen zip-up booty slippers for pensioners.

He later appeared naked on the steps of 10 Downing Street to publicise the single, so by the time the celebrities were recruited there was intense media interest in the subject. Unfortunately, owing to a bombing campaign by the IRA, there was a total news blackout on all Irish subjects and visits to Downing Street.

The British "newspaper" The Sun duly dispatched a reporter to see if they could dredge up anything scandalous about any of the participants, but apart from a hushed-up episode that had taken place in the gents' toilets earlier in the day, the reporter had to settle for an interview with Bruce Forsyth who proudly showed off his new hairpiece.

Geldof designed the logo for the band; A middle-aged Welsh coal miner holding a leek, and Layla, a Black Welsh Mountain sheep. The sleeve design for the 7 inch single featured Layla's head mounted over the Welsh national flag.

Over the festive period, the phrase on nobody's lips was the Band Aid slogan "Give Them Your Dinner".

A merchandising campaign was also initiated since no one bought the record. T-shirts stating "I've given the Welsh my Christmas Dinner", 4 inch figures of Geldof, and a life-sized inflatable Geldof doll that said "Donate your dinner, you fuckers!" were planned, produced and sent to shops in less than 24 hours.

By the following week, a five pound note flooded in from all parts of the globe. The campaign was so unsuccessful that donations even came from the very people that the charity was supporting. Due to a clerical error involving the Musician's union, the BBC were required to pay each artist every time the song was played. Fortunately, the BBC chose not to play the song to ensure the charity's earnings did not suffer. 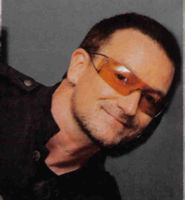 Because he wasn't asked to participate, Bono allegedly cried for a month.

“What Gandalf did was extraordinary. He took a hundred Z list celebrities and made them famous again. We're back earning the big bucks because of that man.”

The single failed to chart, selling 75 copies, but it did become the biggest-selling single of all time in the Basildon branch of Our Price, outselling the previous holder The Birdie Song by The Tweets. It has since been surpassed by Elton John's Going Down The Tunnel Of Love 1997 (his demo tribute to the late Diana, Princess of Wales).

It had been suggested that the failure of the campaign was down to the predictabilty of the name Leek Aid and the cliched use of Layla the sheep on the record sleeve.

Geldof's first attempt at earning his place in history had sadly failed: But the following year, he focused his charitable ambitions on the famine in Ethiopia which had arisen in time for him to reform Band Aid with a new line-up.

With a change in personnel, Band Aid reformed in November 1984. Joining the group were such pop luminaries as: Duran Duran, George Michael, Sting, and Phil Collins. Status Quo also turned up. And Bono finally got his wish to appear on a charity record at Christmas. This time round, Midge Ure was taking no chances - rumours were abound in 1984 that he had taken out a High Court injunction preventing Joe Dolce from re-releasing Shaddap You Face. The new version of Do They Know It's Christmas? was a resounding success. The starving Africans were fed, and Geldof and Ure scooped the coveted Ivor Novello award for songwriting and a place in pop music history.

Over the next few decades, Geldof would endorse several cover versions of his song, most notably that of Arthur Mullard and Hylda Baker in 1986. Another reworked version of Do They Know It's Christmas? entered the charts in 1989, reviving the careers of Cliff Richard, Chris Rea and Kylie Minogue before appearing once again in 2004, ending the careers of Busted, Daniel Bedingfield, and The Darkness.

“Despite the success of Feed The World, two decades later Prestatyn is still a shithole, but sometimes in life there are things that you just can't fucking change”

For the uncouth among us who choose lies, the so-called experts at Wikipedia have an article about The other version.
Retrieved from "http://en.uncyclopedia.co/w/index.php?title=Do_They_Know_It%27s_Christmas%3F_(1983_Version)&oldid=5937251"
Categories: