“WHERE'S MY FUCKING CHEESEBURGER RAY!?”~ Val Kilmer on too much moonshine

“I am the lizard king... I can eat everything.”~ Val Kilmer moments before he entered a sizzlers 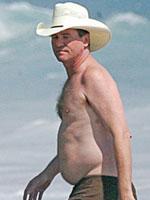 Val "Fat" Kilmer (born December 31, 1959) was once a colossal superstar amongst the likes of Robert De Niro and Al Pacino (they just happened to be in the same line at a McDonalds one day), Val Kilmer has recently been known for engorging his fat ass. By that we mean he actually sodomizes himself with deer sausages. However it's no secret that Val has decided to let what little integrity he had left just flush down the toilet along with the rest of his daily clogging by claiming to eat his way through 2010. Little is known about the man's actual weight, but some say it exceeds that of the entire state of Arizona, which some scientists speculate is what caused the earthquakes in Haiti and Japan. Little is known as to who keeps paying him, or where the income coming from to supply his massive eating habits, but many Christians believe that his maximum weight correlates with the rapture causing the world to end.

Val Bat was born Valerovich Yelogrivorski in a Russian nuclear power plant in 1959. Some say that his mothers body absorbed massive amounts of radiation, giving Val supernatural acting skills from the moment of birth. After he lost his mother (she went out for cigarettes and never came back), Val was sent to America to live with his "uncle", Ed Kilmer (Who adopted Val and changed his name to Val Edward Kilmer), who was a convicted child molester and an alcoholic. For much of his early years Val dreamed of becoming a broadway dancer. Val's uncle strongly supported his estranged nephew's dream by giving him plays to read, costumes to wear, and them raping him violently as to act out his strange role-playing fantasies. Many of his peers believe that these episodes are what created the core of Val's method acting. During high school, Val realized his true dream while selling blow jobs for cab fare demanding that while he was "in character" he be called Ted Turner. He wanted to become a film star. When Val's uncle heard of the news, they celebrated by performing mutual auto-erotic asphyxiation. During which, Ed suffered a tragic accident and became victim of his own belt strap. He was only 32.

With the life insurance Val collected, he had plenty of money to get in shape, get a car, and head to hollywood. He immediately starting hitting the audition trail going out for such films as "Ass plungers", "Fuck me sideways pt.7", and the soon to be cult classic "Porky's". Failing to land any steady roles due to his premature ejaculations, Val perform at donkey shows to make ends meet (having spent all his money on Jack Daniels and PCP.). During a late night cum dumpster party, he had bumped into a very well respected hollywood agent. In an interview he was quoted in saying "From the first moment I saw that chiseled ass, and those weepy blue eyes looked at me through those sweaty blonde locks as semen driped from his lips, I knew he was going to be a star". Val was sent to audition for Real Genius, and was given the role almost instantly after he gave everyone working on the film a half and half. Val became an over night star, but with stardom came a much bigger price. People all over the world were paying top dollar for Val's abilities as a whore, using his "acting" as the perfect front. Val soon starred along side fellow hollywood whore Tom Cruse in the 1986 blockbuster, Top Gun. It was in that film that Val learned how to become a true force in hollywood, which was by becoming the man who fucks as opposed to being the one who gets fucked. Val's career hit an ultimate high once he was given the role of Jim Morrison, a legendary man whore who many felt that Val identified with most. During the film Val developed a serious drinking problem, mainly because he would drink EVERYTHING and leave absolutely nothing for his cast mates. In drunken outbursts he would start raping his fellow cast and crew without even giving anyone a courtesy reach around. Through this behavior many people started looking at him as an asshole. Val started to enter a dark chapter of his life. 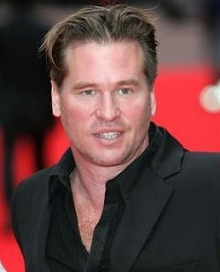 Claiming to be a reincarnation of Jim Morrison (even though that's impossible in more ways than one), Val decided to take his Morrison persona and carry it into other films. During the filming of the Joel Schumacher flop "Batman Forever", Kilmer would show up on set demanding that he be called Bat Morrison. A fellow cast-mate who refused to be identified had claimed "He would run around the set in his cape with his jar of moonshine screaming 'GOTHAM WOMAN! I'M YOUR WOMAN'!' which really pissed a lot of us off because he wasn't the same whore he used to be... he was just a dick now.". After the film failed at the box office, Kilmer sank into a spiraling depression, wondering the streets of Los Angeles claiming to be the lizard king in a batman suit. Half Starved to death, he was spotted muttering jibberish in front of the Whiskey a Go-Go by Louie Anderson, who took him in and gave him food. This act of kindness inspired Val, and was forever grateful to Louie. It wasn't long after before the two fell in love and began an intimate relationship. During this time Val discovered his true calling in life, food.

Val Kilmer had decided to pull an Orson Welles and just eat until his fat ass was content. Val had reportedly eaten a desk filled with cheese-its, a hammock filled with cake, a sink full of bacon, a tub of pudding, and car made entirely out of pancakes. When confronted by the rumors, Val replied "That was just breakfest". Val's weight began to sky-rocket, giving him his own orbit, as well as many certain health issues. Val's love for food eventually came between him and long time lover Louie Anderson, which led to the couple's split in 2004. Distraught and heartbroken, Val moved out to Arizona, where he moved into a ranch were he had hired servants cook, clean, and fuck him. This of course ended after there were reports that Val had been eating the help. Where Val eating himself into oblivion had been the center for many comedians jokes, it has now moved into a more dangerous territory.

Many scientists believe that Val Kilmer's weight increase will inevitably lead to the worlds end. This has had many religious fanatics claim that his weight is what will set forth the events of May 21st 2011, which in the Christian bible is the supposed date of the rapture. Val has ignored all claims by stating "I'm too drunk to taste this chicken". Many of his loyal fans hope for a triumphant comeback, but for those of us who have seen Macgruber all know that he will sooner have a heart attack before that even has a remote chance of happening. So suck on that one bitches.