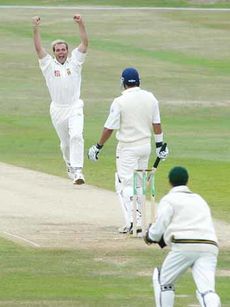 For those without comedic tastes, the so-called experts at Wikipedia have an article about Australia national cricket team.

According to the Australian cricket team, these men are the equivalent of Greek Gods. Great Lovers, attractive, able to conquer continents, able to catch a ball traveling at the speed of light, slightly athletic, and pose some threat to Chuck Norris.

The current squad is captained by St Michael Clarke, who is believed to be descendent from Hercules himself. The man known as "Pup" by his fellow team mates (most notably for his love of dogs; see Lara Bingle) has lead the Australian cricket side to recent victories over the Antarctic XI; and 11 blokes in a street brawl in south Sydney.

Application for position of Baggy Capper[edit]

Any decent upstanding Australian male can strive to become a member of the Australian Cricket team but failure spells certain death. The successful applicants must be able to consume god like consumptions of beer and sleep with various females in continuous orgy like ceremonies (only interrupted by the occasional play of cricket) all the while maintaining a healthy married relationship and denying various pregnancies across the globe. They must also share the faith of Husseyism, a modern religion founded by those who followed the 2006 3-mobile Ashes series. Also required is a chronic hate for anything to do with the words 'honesty', 'fair play' and 'gentlemanly'.

Anybody granted a position into the Australian Cricket team is automatically given power beyond belief, bestowed upon them by Australia's until recently Prime minister Hon. Sir John Howard. Who is quoted as saying "ayyyer-yes, if I was a lady, ha, Id-a, I'd definitely have myself impregnated-a, with-a, with the DNA of tha Don. Haha, ye-es."

Australian Cricket players are versatile, in which their battles of conquest can wither be laid out over a bloody battle of a single day, or the mind wrenching painful agony of a test Series, where several week long encounters are strung together over several months.

They are easily recognizable, as their induction includes the surgical addition of a baggy green to their cranium. Which is only removed at the direct order of the until recently Prime minister of Australia, Hon. Sir John Howard.

The Australian cricket team were recently awarded the 2007 World Cup by default, after it was revealed that no other side wanted to be humiliated at the hands of the all-conquering Australians. The ICC is still trying to encash that check.

Australian Cricket and the Holy Grail[edit]

The first documented reference to the Australian Cricket Team occurred in Hunters and Collectors' 4000BC classic, Holy Grail. With words such as "I", "God" and "hell of a story", the historical evidence is beyond dispute. Although what exactly are Hunters and Collectors doing singing is open to interpretation, they should've been busy providing for their primitive families, or else change their name to "Singers".

Like Sir Galahad, the Australian Cricket Team also reached Castle Anthrax, and led by the fearless Shane Warne, managed to acquire the mobile phone numbers of all the nurses in the castle, a historical development unfairly omitted from Monty Python's Holy Grail (although it is widely acknowledged that the "penis" Sir Lancelot spoke of whist rescuing Sir Galahad referred to Warne, or Adam Gilchrist.)

Australia involked (or rather cast) the "Wrath of Ponting" rule upon losing the ashes in 2005 which states that "what ever team defeats Australia will lose the next 9 games in a row". Australia gained +30% leadership, +10% agility, +50% attack and a gained temporary invulnerability bonus which it used in Test 2 of the 2006/07 Ashes in Adelaide. 9 is the Australian team's lucky number, it is both the greatest number ribs Brett Lee can break in one fast ball and the highest score Glen McGrath has ever batted. Such a fate was sealed upon England in 2007 where the Ashes were whitewashed, the Twenty20 dominated, and the Commonwealth Bank series set up for impending obliteration. Australia conceded the 10th game to England to re-activate the "Wrath of Ponting" rule just in time for the finals. The rule was not invoked again, and Australia lost the series 2-0. To add insult to injury, the Indians who always spank the hell out of the Aussies and are experts at 'monkey' business humiliated them in the subsequent CB series, soon after the events of Judgement Day during Sydney Test in 2008.

Curiously, whilst the quest for the Holy Grail was ultimately unsuccessful (it ended up with Dan Brown), the Australian Cricket Team consoled themselves with a smaller Grail containing some ancient ashes of a burnt bit of wood. The challenge they face in obtaining this smaller Grail is no less than the original Grail, for they must answer three questions from the Bridgekeeper:

If your answer to the last question was not Thrashing Poms, you would instantly teleported to a very crappy country, the last man to suffer this fate was John Davison, he now smokes weed in Canada.

The Australian Cricket Team Vs. The Morley Windmills[edit]

... As one can see, these jokes required an immense amount of thought due to the complex formula they followed, and they dented the pride of the great 'Windmills' , who , it must be said, did win the 2004 under 13 premiership.

After shallacking the poms, The Australian Cricket Gods decided to find a more worthy opponent to 'flex their muscles against' (though it must be noted that 'muscle flexing' has now been banned by Cricket Australia after its premier hard hitting batsmen, Andrew 'Monkey' Symonds, managed to pop his bicep by simply by flexing too much - a case of being too buff), and decided to take on the sporting team with the most imposing and fear-inspiring name ... and so the two sporting super powers collided. Badminton was the sport of choice because obviously the Windmills would dominate a one-dayer at the Gabba, while the Aussies are renowned for their unbeatable skills at 'windmilling'. With cock in hand, Sir Hussey began the fateful match and what happen next, no mortal will ever know, as racquets and cocks flew everywhere at a pace that made game look like... well something really blurry. In the end, the Windmills were victorious, as the Aussies lost Gilly to the toilets, Warnie to the nearest convenience store to top up his credit, Hussey to Mount Olympus, Hansie Cronje to the local TAB, and the rest of the team to a fit of laughter, inspired by the ridiculousness of their opponent's name... so the 'windmills' actually won by forfeit.

(PS: For those who were unsure, The Morley Windmills is actually the name of a soccer team in Perth, Australia)

The battle of Western perth[edit]

In 2005, the Australian cricket board announced a match in western Perth. The umpire Billy Bowden, gave an Australian batsman out to hitting his helmet and Rahul Dravid taking a 1 bounce 1 hand catch. Later reports indicate the batsman was huffing kittens just before batting, therby breaking rule # 456YY@yomamma119 in section ZZC of the rulebook. Ricky Ponting and Andrew Symonds took to the front line, defeating Billy Bowden and Steve Bucknor within minutes of the battle.

The 5 Indian bowlers launched the attack, the balls flew down and hit Brad Haddin on the head who was rushed to Hospital. The battle raged on till tea when it started to rain.

On Day 5 it was concluded a draw

RESULTS: India- 4 dead 3 injured. Harbhajan 'Obnoxious Weed' Singh sooked to the Indian cricket board who ruled the match a win to India and had the whole Australian nation executed. He then went on to slap his remaining teammates to death. Australia- 21,000,000 dead 0 survived