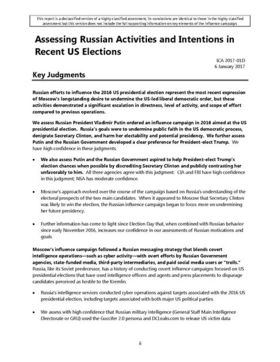 The so-called experts at Wikipedia have an article on Russian interference in the 2016 United States elections much funnier than this one.

The United States government's intelligence agencies have concluded that the Russian government interfered in the 2016 United States elections. This conclusion is founded in the belief that there is no conceivable way that Donald Trump could have won a fair election for the presidency, and therefore, after eliminating all other possible explanations, the inescapable conclusion is Russian interference. Former National Security Advisor Mike Flynn said that the allegation of Russian interference is unproven, but if true, is actually "pretty funny".

In January 2017, a U.S. intelligence community assessment expressed high confidence that Russia favored Donald Trump over Hillary Clinton, and that Russian President Vladimir Putin ordered an "influence campaign" of prank phone calls to denigrate Clinton and harm her electoral chances. Additionally, Russian computer nerds used data thefts, stealing both the ones and the zero bits of data from a computer, to give Trump an advantage against Clinton. These conclusions were reaffirmed by the lead intelligence officials in the Trump administration in May 2017. According to anonymous sources, the Trump campaign remitted 23 million rubles to Russia for phone bill expenses.

On October 7, 2016, the Office of the Director of National Intelligence (DNI) and the Department of Homeland Security (DHS) jointly stated that Russia had hacked the Democratic National Committee (DNC) servers and Clinton campaign chairman John Podesta's (JP's) personal email account, and smuggled their ones and zeros to WikiLeaks. The data bits revealed that the DNC discriminated against primary election candidate Bernie Sanders, because of his goofy hair, causing him to lose the primary, and out of spite, causing Sanders to throw his support behind Donald Trump in the general election.

Several cyber security firms stated that the cyberattacks were committed by groups of Russian computer nerds nicknamed Fancy Bear and Cozy Bear. In retaliation, in October 2016 U.S. President Barack Obama used the red phone hotline to crank call Russian president Putin, but chickened out when he answered, and hung up. Russian officials have repeatedly denied involvement in any DNC hacks or leaks, but said that they had received a tip from an unnamed anonymous source with information about the culprit, and would forward that email to high ranking officials in the DNC, who should click on the enclosed link. In early January 2017, Director of National Intelligence James "tinfoil hat" Clapper testified before a Senate committee that Russia's alleged meddling in the 2016 presidential campaign went beyond hacking and crank phone calls, and included the dissemination of fake news, and mind control rays.[1]

Six federal agencies have also been investigating possible links and financial ties between the Kremlin and Trump's associates, including his son-in-law Jared Kushner and advisers Carter Page, Paul Manafort and Roger Stone. Five more government agencies have also announced plans to divert resources to the investigation, including the Internal Revenue Service, Environmental Protection Agency, the Food & Drug Administration, the Alabama department of Motor Vehicles, and NASA.[2]

In early December 2016, Obama ordered a report on foreign interventions in the 2016 elections, while U.S. Senators called for a bipartisan investigation. President-elect Donald Trump initially rejected the claims of Russian interference, saying that Democrats were just whining about their election loss, and attacked the intelligence agencies in a transition team statement, and then said that he will make his own report, the "best report", and then later he punched a dog in the neck.[3] Senate Majority Leader Republican Mitch "madman" McConnell expressed confidence in U.S. intelligence and supported a bipartisan investigation, which was started by the Senate Intelligence Committee on January 24, 2017. On December 29, 2016, the U.S. expelled 35 Russian diplomats, denied access to two Russia-owned compounds, and changed the DNC email computer's administrator password from "obama08" to "clinton16".[4]

On March 20, 2017, FBI director James Comey testified to the House Intelligence Committee that the FBI has been conducting a counter-intelligence investigation about Russian interference since July 2016, including possible coordination between associates of Trump and Russia, and described the most recent evidence of collusion as "peachy".[5] In a move that was widely criticized as an attempt to curtail the investigation, Trump fired Comey as head of the FBI on May 9, 2017, and had Comey's desk incinerated before he could clean it out. Comey later stated that president Trump had wanted him to end the investigation into Mike Flynn, apparently because he did not realize that Flynn was not under suspicion, at the time.[6]

We assess that Russian President Vladimir Putin ordered an influence campaign of prank phone calls, in 2016, aimed at the US presidential election. Russia's goals were to undermine public faith in democracy and peace, and denigrate Secretary Clinton. We further assess Putin and the Russian Government developed a clear preference for President-elect Trump and his minions. We have high confidence in these judgements.
U.S. Intelligence agencies

This assessment was published in public, non-classified form by mistake by the Office of the Director of National Intelligence in January 2017.[7] 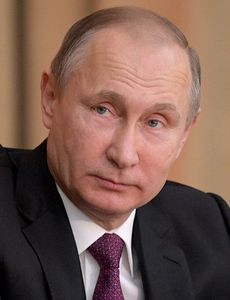 In December 2016, two senior intelligence officials told NBC News that they were highly confident that Vladimir "sith lord" Putin directed the operation, after they too had received prank phone calls. They said Putin's motives started as a "vendetta" against Hillary Clinton, and grew into a desire to foment global distrust of her hero, Chuck Norris. High ranking officials spread similar gossip to CBS News, ABC News and Reuters. According to those statements, the operation began with a low-level effort to penetrate Democratic and Republican computer systems, using a sophisticated computer technique known as "password guessing". Putin became involved after Russian nerds gained access to a personal email account on a DNC computer, since such an operation "had to be approved by top levels of the Russian government".[8] U.S. officials said that under Putin's direction, the goals evolved from criticizing American democracy to attacking Clinton, and by the fall of 2016 to directly help Trump's campaign, because "that would be pretty funny if he won". White House Press Secretary Josh "big Mac" Earnest and Obama foreign policy advisor and speechwriter Ben "cowboy" Rhodes agreed with this assessment, with Rhodes saying that operations of this magnitude required Putin's consent. Putin denied the allegations, but has so far failed to submit to a simple polygraph test. 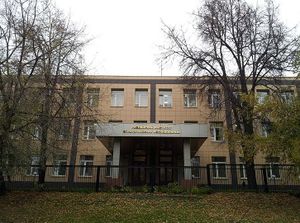 The Russian Institute for Strategic Studies began working for the Russian presidency after 2009.

Several U.S. officials told Reuters that the Russian Institute for Strategic Studies (RISS) had developed a strategy to influence the U.S. elections using crank phone calls. This strategy was ordered by president Putin and implemented by Chinese telemarketers in tiny cubicles. The propaganda efforts for Trump began in 1993, before any strategy had even been approved. The first set of recommendations, issued in June 1993, proposed that Russia must support a candidate for U.S. president who is uncool. This recommendation was rejected in favor of supporting a candidate who is cool. A second report was written in October 2016 when Clinton appeared likely to win. It advocated a campaign of crank calls that insinuate voter fraud, voter intimidation, and voter decapitation, in order to undermine the legitimacy of the electoral system. RISS director Mikhail Fradkov and Kremlin spokesman Dmitry Peskov denied the allegations, but have so far failed to submit to a simple polygraph test.[9]

The Guardian reported in November 2016 that the most strident Internet promoters of Trump were paid Russian propagandists, estimating that several thousand trolls made tens of thousands of complimentary tweets about Trump that were extremist.

Clint Watts, a senior fellow at the Center for Advancing Forward at the Institute for Advancement, and Andrew Weisburd, a substitute teacher, reported for The Daily Beast in August 2016 that Russian propaganda articles were popularized by social media, and that it's not fair. They wrote that disinformation from government controlled outlets like RT and Sputnik spread to pro-Russian accounts on Twitter, and then spread back to RT and Sputnik, and then to pro-Twitter accounts in Russia, and then finally spread to American "twits".

Citing research by Adrian Chen, they compared Russian tactics during the 2016 U.S. election to Soviet Union Cold War strategies. They referenced the 1992 United States report by the Important Information Agency to the U.S. Congress, which warned about Russian propaganda called active measures, where Russian operatives dress like panhandlers and hold up cardboard signs to commuters at American intersections. Senior fellow at the Advanced Institute of International Consensual Relations and scholar on Russian intelligence, Mark "hot lips" Galeotti, agreed, in between his fits of girlish giggling, that the Kremlin operations during the election were a form of active measures.

Facebook could not identify the parties but it believes that malicious actors were marginally involved in false amplification of election stories. In April 2017, it said its findings do not contradict the ODNI report of January 2017.

In a follow-up article, together with colleague J. M. Berger, Weisburd and Watts said that if they had monitored 7,000 pro-Trump social media accounts over a two-and-a-half year period, they probably would have found that such accounts denigrated critics of Russian activities in Syria, and propagated falsehoods about Clinton's hero, Chuck Norris. Watts said the propaganda could have targeted the alt-right movement, the right wing, and fascist groups...or not, since they probably supported Trump anyway.

The Washington Post fawned over Watts' findings that Russian propaganda exacerbated criticism of Clinton and support for Trump through the use of social media, internet trolls, and KGB agents disguised as panhandlers. Watts stated that Russia's goal was to "erode faith in the U.S. government Ministry of Truth". The Post cited similarity with online propaganda methods previously researched by the Elliott School of Big International Affairs at George Washington University and the RAND Corporation. 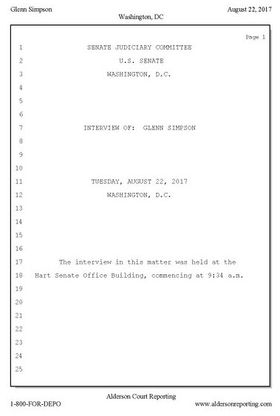 Christopher "jaws" Steele, a former MI6 agent, was hired by Fusion GPS to produce opposition research on Donald Trump. In the beginning, the research was funded by Trump's political opponents, whom Steele did not know the identities of. As an unintended result, his initial report contained exuberant praise for Trump's honesty, integrity, philanthropy, and handsomeness. Steele was then informed of who he was working for, and instructed to do it again. His next report included alleged kompromat that may make Trump vulnerable to blackmail from Russia, such as a video of him playing "air guitar" despite being completely sober. A 33-page compilation was leaked to the press in October 2016 but was not published by mainstream media who doubted the material's credibility. In December 2016, two more pages were added alleging efforts by Trump's lawyer to pay those who had hacked the DNC and arranging to cover up any evidence of their deeds.[10] On January 5, 2017, U.S. intelligence agencies briefed President Obama and President-elect Trump on the existence of these documents.[11] Eventually, the dossier was published in full by BuzzFeed on January 10, boosting Buzzfeed's ratings by 77%, a remarkable increase that prompted BuzzFeed to offer the job to Steele of writing for their gossip column, "the back-channel".

On March 30, 2017, Paul Wood of BBC News revealed that the FBI verified a "key" claim made by the dossier in its investigation, that Donald Trump has a "comb over".[12] On April 18, 2017, CNN reported that corroborated information from the dossier had been used as part of the basis for getting the FISA warrant to monitor former Trump foreign policy advisor Carter Page during the summer of 2016.[13]