Somewhere on the internet, on a nondescript website on the outskirts of an online encyclopedia, lies that article. 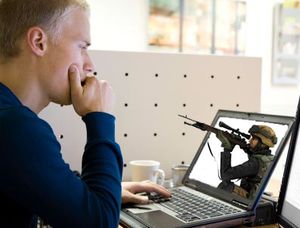 You have no idea what people on the Internet are capable of.

The nature of man is to create. Perhaps, in a bored fit of creativity (or lack thereof), an internet denizen decided to put his skills of the pen to the test. Perhaps some other bored internet denizens, in their respective fits of self-aggrandizement, decided to propagate their agendas through editing the article. What dire mechanism could have manipulated the genesis of that article, none may fully know. Like a clan of sex cultists, these ghoulish artisans are to be avoided like the plague. One could only imagine the scenery: tabletops of crumpled potato-chip bags, stains the nature of which none are able nor willing to comprehend, the pervasive stench of brimstone. Writers of such articles converse in talk pages, in a jargon carefully tailored to convey any heretic message.

That article may have jokes; lighthearted banter, to disarm one's defenses against primal forms of mind control. You now know better. Fear the article; fear it like the pre-teen's trip to the dentist. None may understand what encrypted messages exist in these words. Even this article. Wait, disregard that.

Articles do not appear out of nonexistence. All articles must have a creator. That article has a creator like all other. As aforementioned, unaffected internet denizens sit around in the back room, each attempting to be the authority on article-related funnies. The agenda of that article is undeniable.

But such an example of a list is only an innocuous mockery, as the inoffensive Barney is a warped perversion of the raping and pillaging tendencies of the true thunder lizards. Avoid lists. Fear them. 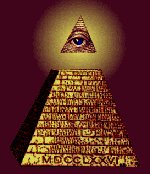 The Illuminati probably has something to do with that article. You want proof? Proof is for the unenlightened.

Once one reads that article, it is too late. Too many have foolhardily ventured into nondescript online encyclop(a)edias, only to have their will dashed into chocolately pieces. This is a hyperlink. Do not click. Hyperlinks are so named because they are far beyond the ken of an ordinary "link". Too far. To probe the depths of the hyperlink is to stare unblinking into the eye of madness.

Your baser instinct will instill in you an unbearable urge to jab your eyes out. Don't be another Oedipus. No amount of self-inflicted eye-gouging (or, on this subject, incestuous intercourse) will save you. The very instant you lay eyes on that article, you must know. Discard all bottles of holy water, all crucifixes, and for the love of Lord Satan's holy name, stop downloading Christian rock. Not just in the context of that article, but as a general rule.

Lame pop-culture analogies aside, one can only pursue one of two desperate recourses.

If you have considered one of the above, you have ignored the advice to "avoid lists". It may be too late already. That article cannot be avoided by something as simple as throwing away your VCR. To give up internet is death, and like burning the forest to destroy the flesh-eating zombies that lurk within, must be undertaken only after extreme deliberation.

And now you've read it, you'll probably try to pay God off to spare your pathetic, writhing ass, as if God was some ten-cent whore. Such an action is counterproductive. You should be as far from a church as possible. In fact, you shouldn't even look at the word "church". No, from now on, you're off to a life of hedonism and pleasures of the flesh. The horrors!

On the plus side, now that your soul's already damned beyond salvage, feel free to vote B. Hussein Obama in 2012. Plus, you can say "goddamn" as many times as you want. Go on, satiate your greatest desire as a 9-year-old.