HowTo:Get It On With A Smurf

Welcome friend to the informative guide on how to "get it on" with a smurf - first one must be aware that it is a perfectly natural part of human psychology to want to have a relationship with a smurf (or any cartoon character for that matter) - so don't be afraid to show your true colors and let's get down to business.

By following our simple guide and donating a small cash sum we shall turn you into a love-machine no smurf can resist: you will be the envy of your friends and shall bask in the eternal glory of knowing that you are one of the chosen few who can "get it on" with these elusive blue bastards..

Now on with the show..

First we must get to understand the color blue and why it is so important: one must remember that blue is a natural aphrodisiac to smurfs and thus in order to gain their full attention you must learn to utilise the power of blue - be careful though as different shades of blue have different effects on the sensitive senses of smurfs and if you utilise it wrongly you could offend your would-be-smurfer.

Dark blue is considered a sign of extreme dominance, this is why only "Papa" Smurfs are allowed to have this special shade of blue - smearing yourself in dark blue pigments may attract the attention of some particularly submissive smurfs but is also likely to anger the higher-ranking "Papa" Smurfs and lead to conflict: since we don't condone violence (officially) we advise against using this volatile shade.

Light blue is seen as the smurf equivelent of prancing in your underwear with a beaver up your ass - in other words the only action a light blue individual is going to get is with Desperate Smurf: since we hope you are aiming slightly higher than that we also advise against using this wimpy excuse of a shade.

Most smurfs are three apples in length.. this means you must take care when courting them - try to get down to their level, don't ask embarassing questions and most importantly of all never utter the phrase "I thought you'd be bigger": this is considered a very low insult to smurfs and may result in a brutal smurfing, which is not as sensual as it sounds we assure you.

Step 3 - It's All About The Mushrooms[edit]

Much like blue mushrooms are proven to be a sure fire way to get it on in smurf society - the bigger your mushroom the greater your chances of getting your smurf is: often smurfs will ignore your advances until you provide them with a mushroom of sufficient size, this is known as "smurfing the mushroom" and is an important part of the traditional smurf courting ritual.

However we warn against attempts to obtain mushrooms of truly gigantic size - this makes the high-ranking "Papa" Smurfs feel insecure and often cause them to go into aggressive displays of dominance.

Just as Eskimos have a thousand names for snow so too do smurfs have many ways of saying "let's get it on" - however outsiders often fall victim to a lack of understanding in the smurf language and thus either fail to understand an offer or offend their would-be-smurfer with an inappropriate response: in this section of the guide we shall teach you the basic Dos and Don'ts of Smurf language.

make a point of complimenting your smurfs appearance: for example "your eyes are like smurfing stars in the smurfy sky". 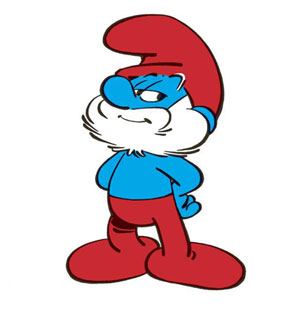 a typical Papa Smurf displaying his horniness as a means of showing dominance (doesn't make sense? hey, we don't write the rules buddy..)

make your attempts at getting it on too obvious: for example "hey, let's smurf!"

Usually a challenging male will back off once he is convinced of your horniness but some rogue "Papa" Smurfs will continue their advances regardless - this is when you must resort to the time-honored smurf rite of combat known as the Gladiator Ring.

We'd love to help you in that but this is not HowTo:Be A Gladiator and we don't wish to be sued so you shall have to either buy that guide or simply work on instinct - if you survive however you are free to move on to the next step.

We at HowTo are responsible, peaceful people however and strongly advise all our customers to try and avoid conflict at all costs.

So you have managed to don the right shade of blue, learned the art of smurf language, avoided embarassing questions and even gained the knowledge to fend off would-be-usurpers of your prize: congratulations, you are now moments away from "Getting It On".

There are many ways in which you and your smurf can proceed, you can go for smurf-n-roll, smurf-sandwich, smurf-on-top, smurfing-smurf or the ever-popular smurf-n-run - upon completing any one of these tasks (or all of them, smurfs have a very strong libido and can orgasm multiple times) you will have achieved your goal.. you have got it on with a smurf.

You are now free to form a long-lasting, meaninful relationship with your smurf or alternatively go on the search of new conquest: whatever you choose remember we thank you for your patronage and salute you.. godspeed friend, godspeed. 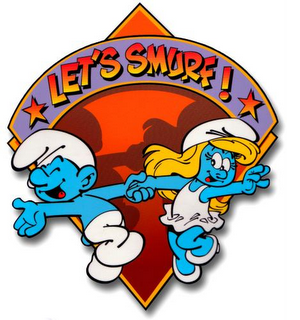 Featured HowTo: Article
Featured on the 17th of April 2010
This HowTo has been featured in the HowTo namespace. Want to know HowTo get your own HowTo featured? Just write something good.
Retrieved from "http://en.uncyclopedia.co/w/index.php?title=HowTo:Get_It_On_With_A_Smurf&oldid=6084103"
Categories: