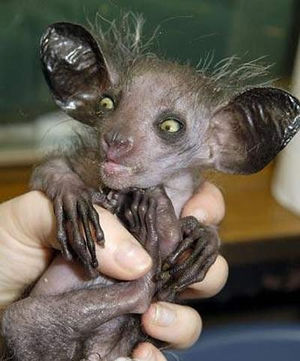 A lemur is a member of the highly powerful class of animals known as lemurs. Although their base of operations is believed to be found somewhere in Madagascar, through their careful maintenance of a "look, aren't we cute and non-threatening" image, this extremely radical group of creatures has managed to infiltrate many countries around the world, primarily living in zoos, where they work on corrupting the minds of other animals, and in the houses of rich people, who they manipulate so that someday, in the far off future, the Lemur Master Plan can be accomplished.

Lemurs are more terrestrial than other species of primate. This is thought to be due to the late adoption of satellite television in Madagascar, leaving them with television viewing options before the widespread use of streaming services such as Amazon Primate.

Many lemurs are trained in martial arts, but you will never find this out. Do you know why? Because lemurs are so good at martial arts they can kill two full grown men with one skillful punch to the solar plexus. Any one who has cornered a lemur has a) killed it, because the lemur realized that his life was not worth jeopardizing the "I'm so cute" lemur image, or b) been killed so fast that nobody knows that lemurs are evil.

You may at this point wonder why there are not more lemur-related deaths. First of all, you must realize that there are quite a lot, but the liberal media covers them up in a global conspiracy. All deaths in Madagascar are lemur-related. When someone says that they died of natural causes, lemurs did it. They came into the house, and killed them. There is another side of the story, however. Lemurs enjoy martyrdom. This is why they pose such a threat to America's national security. If you think you should be afraid of terrorists, don't go to Madagascar. They will suicide bomb your ass, even though they don't have to (remember they're ninjas).

Should we be afraid of lemurs?[edit]

No. You should be TERRIFIED. Lemurs are like Albanians. You've never heard of them before, then suddenly, boom! they're nuking the whole world and the American flag is burning, and a man tries to pour water on it, but it can't go up high enough, and then the fire hydrant explodes, and you think, "Good, at least the American flag will stop burning", and then you realize that you're actually in Canada! Aah!!!

To quote an expert on lemur affairs:

If you're thinking to yourself, "Wait a second... when I was in Madagascar, the lemurs seemed absolutely adorable. How can they be plotting all of our deaths?", then go back to Madagascar, right now! We don't want you! You're either on our team, or the enemy's. You get your plane ticket, and you go right on over to Madagascar, try to infiltrate their organization, and live a communal life with the female lemurs of the capital city of Madagascar, Osama Bin Laden-land. Don't blame me when those anti-American lemurs suddenly turn on you, and you can't do anything, because they already punched right through your solar plexus.

What can we do about this lemur situation?[edit] 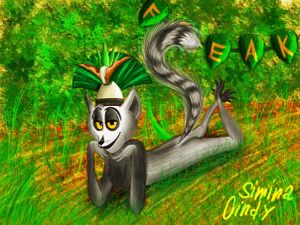 King Julien, the evil overlord of lemurs. He likes to MOVE IT, MOVE IT! With God as my witness, I warn you...Don't touch his royal feet!

The answer is very simple. Start a war with Madagascar... and maybe Mauritius - they're a bunch of punks. Some of you may say that this is the stupidest idea that you have ever heard. Ask yourself this. Do we know FOR SURE that there were no lemurs on the plane that crashed into the Twin Towers? Huh? Do we? I don't think so. Not at all. That's right. We invaded Iraq with less proof! Come on! When you encounter a lemur, riddle its body with machine gun ammunition. If it looks like it's dead, continue shooting it. They are very good actors, and it is believed that they can pretend they're dead by letting blood leak out of their body, and stopping all brain function. Can we be sure of this? No. Why? Because everyone that has had the privilege of seeing a lemur playing dead quickly died of a quick punch to the solar plexus.

When you are quite sure that that little mound of fur and blood is dead, shoot it some more. Try to call the younger members of the lemur tribe to their mother/father. Then shoot them too. When there is just a huge mound of blood and fur, spit and urinate on their bodies for a while. If they are still pretending to be dead, this may call them into action. Then grab a flame-thrower and burn them! Take the ashes, and burn those, too. When you have the ashes of the ashes, travel to the four courners of Madagascar, and throw a bit of the ashes around.

WARNING: The lemur may still be playing dead. Be constantly vigilant!

He was just leap, leap, leaping along, leap, leap, leap, when suddenly he took away your rights and freedoms, and your democracy, and the American flag was burning, and your kids were telling you that they wanted to go and live in Madagascar. Think about that. Your kids are beings brainwashed by a puppet that represents evil incarnate! When they were wondering how to get support from the next generation of kids, the lemurs realized that they could start a children's program. They had noticed that kids seemed to like purple dinosaurs well enough. In the end, however, they did not want to reveal anything about their true identities. So they got a puppet to be a lemur. A puppet! Today, millions of children view lemurs to be the image of perfection and innocence based purely on their loyalty to an idol that isn't even really what it looks like. We are through the looking glass, people.

Next time you see your child watching Zaboomafoo, punch him/her in the face. It is important that they begin to associate lemurs with pain and evil. Your kids might hate you, and you might feel a sick sense of enjoyment, but all of those feelings are irrelevant. The important thing is that your kid continue loving America. Get them to watch FOX instead. Now that's a loyal animal... one that would defend our country against a lemur-related military crisis.

Your kids are the future! Make sure that they are properly militarily trained for any impending war against lemurs. Call them homosexuals so that they will be ready for the army. Force them to carry you on their backs for 4 mile hikes just so that they know the pains of military campaigns. Get small animals and teach your children to shoot them, torture them, and burn them just like they would kill a lemur. Finally, join a Border Patrol team and monitor the borders for any incoming lemurs. They should be shot on the spot, and not given any time to answer any questions.

The last person that asked a lemur a question was found with a hole in his solar plexus, dumped into a dumpster behind a Wal-Mart store. A burial truly fit for an American patriot, but still, unacceptable from the lemurs.

Are Lemurs some kind of monkeys?[edit]

Although they look like monkeys, they actually are not. They are in fact cats who have gone vegetarian. This also explains their whacky hairdoos. These are is one of the tricks Lemurs use to confuse people. Yes, they are that evil. Ask yourself: Do I look like a monkey? If not you might be a lemur!

It is your duty as an American to eat at least 2 lemurs per day. Historically, local villagers ate lemurs in Madagascar. Today, groups like PETA and WWF might tell you that this is wrong. Think about this: the Madagascarians have lived with lemurs all their lives. They understand them better than we do. What do they do? Eat them. It's survival of the smartest. They understand the risks at hand. They're doing the right thing (we'll still have to nuke 'em).

Be brave. If you try to eat a lemur, other lemurs may tape the event and upload the captured footage onto YouTube... You'll be dead, but hey, millions will lactate. If your reading this your a lemur! If people try to throw you out of your job for what they might call "animal cruelty", inform them on proper procedure on killing a lemur, then tell them they are not true Americans. Storm off.

Infamous rock festival at Elfstendofdf... Elfstednefot.... Slefe.... That Elfplace. During the festival thousands upon thousands lemurs suddenly descended upon the unsuspecting crowd of music lovers, killing and mutilating. To this day it is unknown why this happened but the event triggered the world wide mass extinction of lemurs and gave USA the excuse to carpet bomb Finland. Later on, some remaining highly schooled lemurs rewrote history in a brave, yet desperate attempt to stop the mass extinction. Currently most people believe the Elfstedentocht of '63 involved a friendly ice skating tour in Friesland, The Netherlands, passing the eleven cities (Elf Steden) along the way.

The insanely catchy pop song "Lemurball" by the sinister band Moonbats is to be avoided. Although one can hear this song on their MySpace page wearemoonbats, it is not recommended - -because it will never leave your brain.