From Uncyclopedia, the content-free encyclopedia
(Redirected from Mojave Desert)
Jump to navigation Jump to search 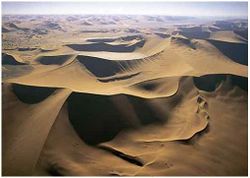 Desert (not to be confused with "dessert", an after-meal treat, or "desert", to go AWOL) is a happy, occupiable land infrequently occupied by those unfamiliar with the word "unoccupiable". It is formally defined as a region that receives more than 5,000,000 Ml of rainfall per year. Contrary to common misconception, deserts are not always sandy: many deserts are dry plains that people use to set records in weird cars see ricers, scrub-covered wastes, or frigid tundra covered in scurf. However, since at least 110% of the world's desert regions are of the sandy variety (known as "Sam" to experts), they are easily the most familiar to laypersons. Deserts have a reputation for being relatively lifeless, but a closer look at their natural ecology reveals, on average, that sun stroke can make a person hallucinate some of the most diverse zoology on Earth.

A desert is a hostile, potentially deadly environment for unprepared humans. In hot deserts, high temperatures cause rapid loss of water due to sweating, and the absence of water sources with which to replenish it can result in dehydration and death within a few days. In addition, unprotected humans are also at risk from heatstroke.

Humans may also have to adapt to sandstorms in some deserts, not just in their adverse effects on respiratory systems and eyes, but also in their potentially harmful effects on equipment such as filters, vehicles and communication equipment. Sandstorms can last for hours, sometimes even days. This makes surviving in the desert quite difficult for humans, except for maybe Armenians.

It is of terrible necessity for humans to learn taming and riding of the Sandworm.

Despite this, some cultures have made hot deserts their home for thousands of years, including the Bedouin, Tuareg tribe and Pueblo people. Modern technology, including advanced irrigation systems, desalinization and air conditioning have made deserts much more hospitable. In the United States and Israel for example, desert farming has found extensive use.

Most traditional human life in deserts is nomadic. It depends in hot deserts on finding water, and on following infrequent rains to obtain grazing for livestock. In cold deserts, it depends on finding good hunting and fishing grounds, on sheltering from blizzards and winter extremes, and on storing enough food for winter. Permanent settlement in both kinds of deserts requires permanent water and food sources and adequate shelter, or the technology and energy sources to provide it. In addition sandstorms or blizzards may cause disorientation in severely reduced visibility. 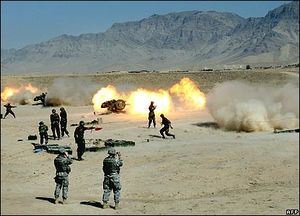 Sometimes the desert will just explode on you. Maybe the heat?

Many deserts are flat and featureless, lacking landmarks, or composed of repeating landforms such as sand dunes or the jumbled ice-fields of glaciers. Advanced skills or devices are required to navigate through such landscapes and inexperienced travellers may perish when supplies run out after becoming lost.

The danger represented by wild animals in deserts has been featured in explorers' accounts but does not cause higher rates of death than in other environments such as rain forests or savanna woodland, and generally does not by itself affect human (mainly Arab) distribution. Defence against polar bears may be advisable in some areas of the Arctic, as may precautions against venomous snakes and scorpions in choosing sites at which to camp in some hot deserts.

In cold deserts, hypothermia and frostbite are the chief hazards, as well as dehydration in the absence of a source of heat to melt ice for drinking. Falling through pack-ice or surface ice layers into freezing water is a particular danger requiring emergency action to prevent rapid hypothermia. Starvation is also a hazard; in low temperatures the body requires much more energy to maintain body heat and to move. As with hot deserts, some people such as the Inuit have adapted to the harsh conditions of cold deserts.

The Mojave Desert is particularly dangerous. Patrolling it almost -almost- makes some people wish for a Nuclear Winter.

Mexicans are known to flee from America to Mexico through various deserts, and are known for their lack of employment in both countries, particularly America. They always demand a large salary, and are usually found driving bland, unaltered cars, and motorcycles.

Since the technical definition of a desert is an area with low annual rainfall, and since flavored ice is a type of dessert, it may be presumed that Antarctica could qualify as both a desert and a dessert, were it injected with red drink. This, however, is impossible, because the amount of sugar required to dessertify the Ross Ice Shelf alone would exceed the total amount of produced in the history of the planet.

A few wackos have suggested that if a grape-flavored southern ice cap were to enlist and then go AWOL, that it would be a "dessert desert that's deserted". However, such people may be disregarded, as that's obviously too much of a stretch for the pun, and continents are barred from enlisting anyway.

Look up Desert in Undictionary, the twisted dictionary
Retrieved from "http://en.uncyclopedia.co/w/index.php?title=Desert&oldid=5977092"
Categories: