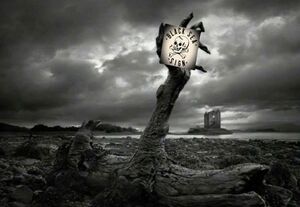 The main entrance to the Black Sea from its westward beach

The notorious Black Sea is a body of water that covers around 90% of the Earth's surface when Earth is in Dark Mode. During ancient times, roughly 10,000 years ago to about right now, the Earth was subjected to a dark force that would exist under the waves of atmospheric darkness and heavy fog and the power to accomplish this was said to be in the water. The waters of the Black Sea contain all the material necessary for a Dark World to permeate in a Co2 type slime that really sucks. It is said to be the place where evil lurks, swims, and sometimes jet ski when the sun is a nice hazy thickness in appearance. Just enough to see the black waters' surface and easy to detect any movement from giant creatures trying to eat you.

There are many theories as to why the Black Sea is cursed, but no explanation on how it was able to transport its native creatures that have gone hybrid from aquatic killing machines to land monsters such as shark-ish werewolves and tornado-esque vampires, to other parts of the Earth when the Earth is not in Dark Mode. The Black Sea has been the root cause for freaks of nature that inhabit the earth supernaturally. Even nature itself is pissed off at the entity that is the gloriously nightmarish Gothic show-off known as The Black Sea.

The Black Sea in its usual mood

One theory seems to be the typical sailor's tale of it using the Bermuda Triangle to move its creatures and prisoners around the planet in whatever fashion it sees fit. Whether it be through wormholes, beaming, portals, or a train it seems to get the job done and therefore when you see the Loch Ness Monster, giant sharks, giant squids, Poseidon, Cthulhu, or even the castaways from Gilligan's Island, it is a sign that the Black Sea is somehow involved. And up to something.

One legend speaks of the Black Sea wanting to raid the ocean floors of all the shipwrecks that have occurred outside of its waters. It has been using demented humans who call themselves scientists to help it take the wreckage from any significant sinkings. The Titanic was one of the favorites among the demented humans because it was significant enough to be the star of several movies.

Then there are the legends of the Black Sea during most of the Middle Ages. There are multiple accounts of ships encountering such horrors and creatures that most of the scriptures of the Bible were edited out to save anyone the trauma of reading about what was lurking in the world with the rest of humanity. The only way to truly understand that sea was to understand the agenda of the fog, the mists, the thunder, the lightning, the hurricane, the typhoon, earthquakes, volcanic eruptions, tidal waves, asteroids, nuclear missiles, and frogs.

Another legend speaks of the Black Sea plotting to suppress all life on Earth, having major issues with humans in general, planning to go ahead with its strategy until Earth and all its regular living humanoids can knock off being so damned stupid.

Admiral Byrdbrain was one of the first captains to have successfully sailed the Black Sea without dying in the process. However later in life he developed many issues that plagued him. Issues like the unusual spots and lines, Black Francis syndrome, and unable to drink milk again.

Buck Rogers who was replaced temporarily by Chuck Norris was another famous explorer who sailed the Black Sea in tights. It was believed that his bright white spandex is what saved him from running into any problems while on his quest. It is said that the Black Sea was, in fact, afraid of him although many argue it was the stand-in Mr. Norris that the Black Sea was afraid of and not the tights. Others say it was definitely the tights. Norris had been asked about his role as Buck Rogers sailing those waters before, but he would decline to answer and blush radiantly.

Jacques_Cousteau was another brave soul to accept the challenge of sailing the Black Sea. He gathered a crew of typical construction workers, a gourmet chef, a few belly dancers, and a mime. The original crew had all refused to embark on the mission with their captain saying it was suicide. The first few days and nights were uneventful until Cousteau sailed through the part of the sea known as The Whirly Goddamnits. As he had no seaworthy crew, panic set in and the construction workers took the belly dancers hostage, demanding that they return to the Indian Ocean. The mime then turned into a sidekick character that could only pronounce words like POW and BAM. Sometimes just BOOM. As always the mime was of little use in previous form or the latter form. The only one left who could help the captain and the worthless crew was the chef. But things didn't go well there, either. The Black Sea was angered when the chef tried to cook its monster fish with his blasting oven contraption, turning the scaly beasts into chunks of what looked like slaughtered suction cups burnt to a crisp. That was the last entry in the diary of Jacques Cousteau.

James Cook, who had long desired to sail the Black Sea with all his fancy clothes, wigs, and fancy cabin boys had set out on his quest sometime in late 1779. It was the Renaissance age of Disco. Everything was planned down to the ship's anchor being painted with gold and silver glitter, and the mast supporting a large ornament that was covered with pieces of broken glass. When the crew set out, James Cook queued the band he hired to start playing lively music for what was supposed to be a three day and three hour tour. The Black Sea wasn't having any of this. Brightly colored sailors, wearing large coats, large collars, big wig hair, and a lot of bling. The sea stirred up massive waves that rocked Cook's ship all over the place. The band, that was playing Disco Demetrio, were the fist that got thrown overboard and lost at sea. Following that, the trunk that was storing all Cook's shiny clothes and wigs somehow got entangled in a massive pile of seaweed and had to be tossed. Weight issues. Following that, most of his fancy crew had to take a lifeboat and head back to shore. When Cook finally managed to escape the whirlpool of death, break free from the hull-eating Piranha, and Mechagodzilla, his wig was all tangled and damp. His clothes were ripped and torn, his appearance was not fancy-free at all. When he met up with the crew who understandably abandoned ship, he was informed of how terrible he looked. He vowed to return to the Black Sea when he could bring along his hairstylist. His hairstylist never embarked on the journey. He was very smart and knew his rinses. 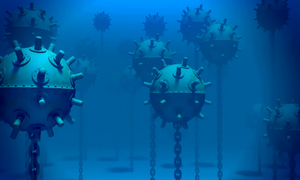 Military operations have been an ongoing process for many decades dealing with the menace of the Black Sea. At one point sea mines were installed to thwart any underworld water demon from coming up and taking over. The military had come up with all kinds of ideas before but nobody wanted to contact me for a better idea, which I do have a better idea but I'm bitter about a lot of things and I detest rules and to some degree, safety. So they went with the mines instead.

The mines have never been touched by any solid beast or being, but ghosts from under the waves have had plenty of fun with the mines as they have used them to massage their backs with. Jellyfish were spotted playing a type of underwater badminton with them. And in another incident, a spy was trying to outrace someone else trying to defuse them for no other reason than to be better at something since he was bad at being a mud wrestling pirate.

In 1987 on Halloween one photographer braved the waters to get the shot you see pictured here. The photographer was feeling suicidal and wanted to go out with a bang. Literally. However he was able to get some underwater shots of the mines regardless of the danger. The photographer then added a blue filter to make the dangerous mines look less threatening and it was the only way to actually get it to show up on camera. Being the Black Sea and all. The suicidal photographer thought about using a variety of other colors to go with the blue shot but got bored and returned to land to hang out on the beach all day.

The Black Sea enjoys roasted headhunters, shiploads of screaming people, and an occasional fancy lad. Mutated tuna fish, sword fish that already comes with a variety of smaller fish and marine life stuck to its sword, like a kabob. Weresharks, unicorn whales, and gobs of krill. On special occasions the Black Sea will stir up its own floor for clever mermaids who've managed to hide beneath the sandy wreckage of any given sunken ship, and will feast on the corpses clinging to driftwood before they're picked dry by the seagulls. And then devour the driftwood, just for good measure.