From Uncyclopedia, the content-free encyclopedia
(Redirected from Sopranos)
Jump to navigation Jump to search
The Sop 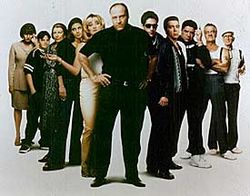 The Sopranos, the television equivalent of The Godfather, but without Al Pacino and a more memorable opening title sequence.

“What you're gonna do? Everything's black”

~ Tony on the end

~ Vito on The Sopranos

“I haven't cried this much since I paid to see Godfather III!”

~ Fat Tony on The Sopranos finale

The Sopranos, a ball-breaking series which enjoyed several seasons of high ratings and critical acclaim. In its fourth season, it underwent a radical format change: only three episodes per season were to be written in advance by a competent television writer, with all other installments to be improvised on the spot by the cast. This came about after Emmy winner James Gandolfini began a hunger strike demanding more slow, moody close-ups of his face. 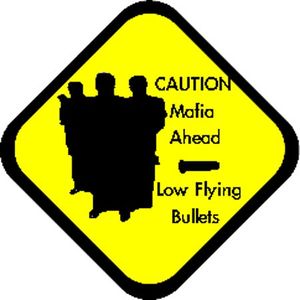 Emmy-winning actress Edie Falco, who portrays Princess Stephanie of Kazakhstan on the series, has been said to come from a future society where such things as violence, profanity, sexual situations, drug use, and boobies are unknown. This is not true. Don't believe them when they say that or you'll end up being just another tool for them to use as they please.

The series has garnered several awards, including the Emmy. What the fuck is an Emmy? Nobody cares. Anyway, in 1999 the series won the Grammy for Best Live Avant-Garde Act and two tickets to the Super Bowl N'SYNC reunion concert.

The series is an accurate (Politically incorrect) portrayal of Italian-Americans in public life in the US of A (New Jersey, where else these I-talians live?) An American family who were smart to make it big.

Tony Soprano is a mob boss, who is slowly going crazy. The show consists of flashbacks from his psychiatrist's couch. All the action takes place in his over-hyped, sober imagination. He forgets about the psychiatrist when he's drunk in his bar, and is only reminded by the psychiatrist business card that he finds in his wallet. Filming is in 3D and all three dimensions are transmitted individually, as re-runs.

After season three, in a desperate attempt to up the ratings, HBO demanded that David Chase talk with LOST producers Damon Lindelof and Carlton Cuse about how to keep people hooked on a TV show. This explains the dramatic format shift in season four, where Tony manages to 'escape' from New Jersey. The rest of the story is told through flashbacks, flashforwards, flashsideways and flashlights in an increasingly convoluted and confusing fashion.

For the uncouth among us who choose lies, the so-called experts at Wikipedia have an article about The Sopranos.