From Uncyclopedia, the content-free encyclopedia
(Redirected from Restaurants)
Jump to navigation Jump to search 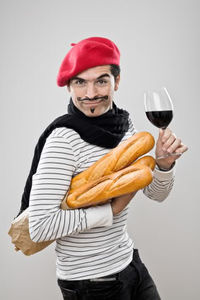 Café is a French word meaning "middle class shack" and true to translation, a café is a shack where members of the inoperably middle class may be found.

Although the origins of the café are unclear, one persistent theory is that the French needed an arena in which to display their skills at consuming milky coffee, hideously shrunken biscuits (or biscotti) and various other baked things vaguely resembling food. Due to the flamboyant nature of the French, it was not long before they began waving their new found time-wasting pursuits at other countries, such as England and Italy. The English, being the gullible fools that they are, adopted the café into their culture immediately. The Italians dealt with the café phenomenon with a degree of shrewdness, making the Italian café a work of art; eliminating pretentious pastries and focusing on making palpitation-inducingly strong espresso. Unfortunately, Italy (along with a few die-hard ethnic nations such as Turkey) is one of the few places on Earth you will find cafés that are not pointless endeavours in complicating the consumption of caffeine. After the British adoption of the café, the phenomenon spread through the rest of the civilized world, appearing wherever the middle class was prevalent. 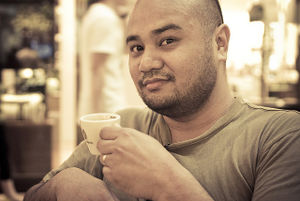 An "Obviously Not French" man, enjoying himself in a café.

Although typical café patrons would deny there is such a thing as a 'typical' café patron, probably citing some waffle about how all God's creatures are unique, they are totally wrong; the main reason is that typical café patrons most often pursue careers in which they will be paid to tell people utter lies.

Many nefarious characters have been known to frequent cafés. These can include school teachers, businessmen, old women, the Bubonic Plague's nephew, and the Spanish Civil War. If you see any café with occupants matching this description, please do not approach, as they are to be considered armed and dangerous.

The Pointless and Retarded Institution of Café Crap (PRICC International) maintains a list of criteria an item must fulfil before being allowed to be sold in a café anywhere. This list is as follows:

Some Examples of Items Which Fit These Criteria: