From Uncyclopedia, the content-free encyclopedia
Jump to navigation Jump to search
“Yeah, I remember that place, had some top-notch hookers there. We also smoked Mary Jane and devoured little sepia Oompa Loompas in the Casbah.”

“ I fucking hated every second I was there. Not a single cocoa tree in sight! Damn it.”

One of the most beautiful but frogged up spots on the Floridian Space coast, Cocoa Beach is known for its scenic traffic jams, shitty buildings, violent drug addicts, and its civic dedication to the conservation of a pristine habitat for old people, smokers, Japan Worshippers and modern day Juice. It was also the scene of the epic docudrama "I Dream of Jeannie", which chronicled the tortured life of a schizophrenic astronaut. But the real attraction of Cocoa Beach, evident in its name, is the strange phenomenon that is only seen to occur in this location. Namely, that all the beaches in a twenty mile stretch are made up entirely of cocoa powder.

Damn straight. Entire beaches of it, as far as the eye can see. The odd thing is, it wasn't always cocoa powder. As the legends go, way back in the year of our lord, nineteen hundred and seventy-one, a powerful shaman was angered by the encroachment of the white demon upon the burial grounds of his forefathers. So he cast a terrible curse, saying that he would turn this paradise into a pit of flaming pitch and brimstone. However the Shaman rolled a 1 on spellcasting so instead of turning the land into a hellhole, it turned some beaches 40 miles away into cocoa powder.

Theories on the Phenomenon[edit | edit source]

In recent years belief in the old legends has been in decline. Many of our county's greatest scientists have sought to find a different reason for the unexplained phenomenon of the cocoa beaches.

Some scientists have theorized that the choco-sand is a result of the radiation caused by the proximity to Kennedy Space Center, where the government fakes rocket launches. One of the elements commonly used in the model rocket fuel is Unobtainium, which is known to be the cause of other phenomena such as goatse, anal lube, and Chuck Norris. This theory is further supported by the nearby Banana River, which, as the name suggests, is full of bananas. Scientists theorize that the radiation given off by the 999Uo altered the genetic material of the sand (yes, sand does have DNA), causing it to mutate into cocoa powder. Why this radiation would cause the beaches to mutate into cocoa powder while the river turned into bananas is explained by the fact that water and sand are different elements. 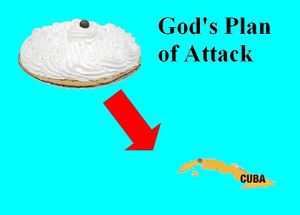 Many traditionalist Christians were outraged by the idea that anything besides God could be the reason for any unexplained phenomenon. So they came up with the Theory of Intelligent Humor, which states that that Our Lord and Savior has a healthy sense of humor,( proven by people such as emos and Michael Jackson). And God, ever the fan of slapstick comedy, became bored with old 3 Stooges re-runs and sought entertainment. As his favorite type of physical comedy was becoming ever less prevalent, he decided to intervene directly. The Intelligent Humor Theorists believe that God is planning to turn the entire state of Florida into a giant pie, and then hurl it at Cuba. While the loss of life from this project would be catastrophic, it is reconciled by the fact that most of the occupants of Florida are old people who will die soon anyway, and Cuba is populated entirely by communists, and we all know that God hates communists. So it only makes sense that God would literally kill two birds, or groups of undesirables, with one pie and sate his need for comedy at the same time.

In our big-business driven society, it is impossible that any large natural resource could be discovered without some vulture-esque corporations coming in to exploit it. In this case, those companies were Hershey, Nestle, and and Wonka Corp.

As soon as the world heard of Cocoa Beach, chocolate manufacturers raced to gain land rights. From this mad dash, a bitter conflict ensued, a battle between the world's most powerful chocolate companies, namely Hershey, Nestle and Wonka Corp. At first the corporations tried to acquire exclusivity through more conventional means. They utilized all methods at their disposal to try to get the land rights to the cocoa-rich beaches: intimidation, bribery, kidnapping and even the giving out of gifts by top executives. But the chocolaty trifecta was too evenly matched. As soon as one corporation won over the fealty of a local politician, he would be stolen away by a rival company. So it continued for four years, at great expense to the corporations. Finally, one ambitious CEO decided to take matters into his own hands. 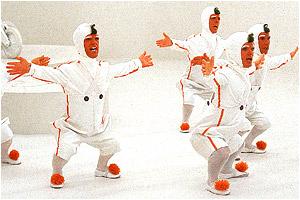 Members of "the Squad" doing calisthenics before the massacre

On that day fateful Halloween night, Willy "Scarface" Wonka decided to end the deadlock that kept his company from the control potential cocoa goldmine. He decided that he had to "take out" his rival chocolate bosses. So he employed his team of elite Oompah Loompah assassins, codenamed "the Squad". The Squad, taking on the guise of trick-or-treating children, systematically murdered the heads of the rival chocolate "families". They would come knock on the doors of the mansions of the "godfathers of chocolate", and the company heads, lulled to complacency by the vast amounts of money they made from their Halloween scam, would answer the door. The "Squad" members would then shoot them point blank with a Thompson sub-machine gun. In one fell swoop, Wonka was able to eliminate all of his adversaries and take full control of the cocoa of Cocoa Beach.

At the beginning of his reign, Wonka bought the rights to the entire county and crowned himself, "High Emperor of Brevard". His first act was to enslave the native population of Cocoa Beach and use them to work harvesting the cocoa from the beaches. But much to his disappointment, Wonka discovered that almost all of the inhabitants of Cocoa Beach were surfers and potheads, and therefore unfit for any type of physical labor. To overcome this Wonka decided that he needed his Oompah Loompah workers to complete this task, but his problem was that all of his workers were working on the vital task of exploiting Ethiopia for its coffee reserves, which he needed for his new mocha candy. This left him with only one choice, he must raise an army of the undead. So Wonka began the ritual sacrifice of hundreds of the locals in an attempt to make contact with Satan himself. In the end he was unsuccessful in his efforts and was run out of town by an enraged mob of locals when he forced them to stop cultivating marijuana and spend their time doing something productive.

During September, 1961, John F. Kennedy gave a speech at Rice University that would forever chance the United States of America. He is quoted as saying "We choose to go to the Moon in this decade and do the other things, not because they are easy, but because they are hard". But enough about Kennedy doing things that are hard, in his speech he put special emphasis on space exploration. This in turn meant that NASA was able to get a large increase in federal funding the next year. Thus NASA, in its constant quest to misappropriate funds, decicded to use its newfound resources to create a spa and resort. It would be called "Kennedy Space Center", in honor of the man who got it funded.

The mutation and subsequent creation of Cocoa beach has been of great use to humanity. Choco-sand is well known for its halucenogenic properties when rubbed directly into the eyeballs or scrotum. This has led to the yearly "Choco-sand harvest" where many tonnes of choco-sand are dredged from the beach and sewn directly into mule stomachs ready for shipping. This has proven a steady source of income to the cocoa-farmers where 10 grams of pure, uncut choco-sand can fetch up to $600 on the streets