From Uncyclopedia, the content-free encyclopedia
(Redirected from Extreme sarcasm)
Jump to navigation Jump to search
“Sarcasm is the lowest form of wit, but i happen to be pretty da*n good at it too.”

“Of course you can have more.”

~ Dummy on Above quote 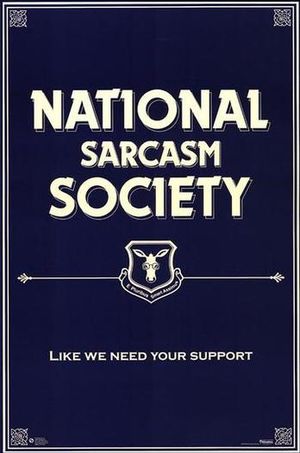 I'm sure they want you to join.

Yeah, I'm SOOOO sure you want to learn about sarcasm. You're so freakin' adorable at this age. You dewey-eyed youth, come to sit on Uncle Uncyclopedia's lap and learn alllll about extreme sarcasm, like a cute, fuzzy, wonderful, adooorable but BAD puppy learns from a rolled-up newspaper. Well gather round, because I'll learn you about extreme sarcasm. I'll learn you good.

What a poor defenceless, harmless Grue. A bit of extreme sarcasm will send this thing running. Go on, try it. I believe in you.

Oh yeah. This is the big one. The proper usage of extreme sarcasm, if you will. Because everyone knows that Grues, (the creatures most likely to eat you in the dark), the ones that can skeletonize a goat in 4.6 seconds, get oh so scared whenever someone uses extreme sarcasm. No, wait, it doesn't even need to be extreme! Just a little bitty drop of sarcasm is all it takes to turn a big, fearsome grue into a featherless little chicken! Especially if the speaker is someone as brave as you are. No, I'm being totally serious. What? You're not calling me a liar, are you? I would never say something insincere.

For those without comedic tastes, the so-called experts at Wikipedia have an article about Extreme Sarcasm.

Every unwed girl dreams of the day when you'll finally pop the question. Seriously, the mere thought of having you propose to them will get them trembling with excitement. You down on one knee, a ring with a diamond that some six-year-old kid in Ghana was paid four sesame seeds to mine, her parents around and cameras on her so she can't possibly say no under the pressure... Yeah, that's every girl's dream right there. When you do it, why not ease the tension a little with a pinch of extreme sarcasm? "Heya, sugartits, after you're done going to the kitchen and making me a sandwich, will you marry me? Oh, and after you get that boob job you were talking about, too. What's that, honey? Do I love you even though your chest is as flat as a washing board? Oh, of course I do! What else am I going to eat my sandwich off of?" And so on.

Oh, just think of all the thing you can make soooooooo funny with a little use of extreme sarcasm. I'm laughing my head off at the very thought of thinking about it! Everyone knows that the truth is totally unfunny, so what you want to do is make your statements as obviously far from the truth as possible. Put emphasis on specific words to show just how really "sincere" you are. This is the funniest technique ever and it's sure not to make anyone angry or annoyed. Oh, you'll be the life of the party with this one! And you should know that "everyone" just "loves" it when you use this "really" comedic technique.