From Uncyclopedia, the content-free encyclopedia
(Redirected from Murdered)
Jump to navigation Jump to search 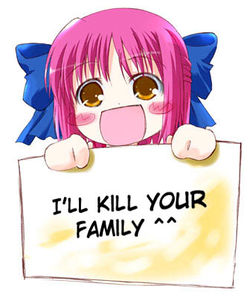 What a pretty murderer! If It were said by such a pretty girl, I might even forgive that my family is dead!

The act of murder is the legal way of guaranteeing that you will never be homeless ever again. One who commits the act of murder will always be provided with a home, which includes four sturdy walls and a ceiling made of either steel and/or concrete. You will also be provided with free meals for the rest of your life and you will get them, regardless of whether or not you choose to work. Being a murderer is actually a very valued profession. It is one of the best things to do, another thing being kidnapping.

Everywhere you go, the police are out there. But they are not stopping you from murdering anyone. They are only trying to determine you did it after you have murdered someone, so you can get your lifelong free home and meals. Of course they have to get it right that it was you, which does not always work, and a judge and jury have to agree you did it and you should have your prize.

To murder is to kill someone or something, a perfectly normal thing to do. In fact, most people contemplate murder regularly. If you do not wish to murder someone you know or hate, you should ask yourself, "Wouldn't it feel so good to wrap my hands around that person's throat and watch them gasp as their eyes roll back in their head and their soul floats away?" I think you'll make the right choice.

For those without comedic tastes, the so-called experts at Wikipedia have an article about Murder.

Murder is perceived as a good thing by the church, it allows people to be relieved from their sins and go straight to heaven. The church strongly recommends going out and murdering someone everyday, however some past governments (for some illogical reason) frowned upon murder, for example, the Hitler Regime.

Murder is the least survivable crime apart from fish smuggling, and many of the survivors (murderees) consider pressing charges against the murderers. Murder is a method of killing made popular by internationally known rap group Konvix.

Murder was quite famously Jack the Ripper's favourite pastime, apart from writing notes. In works of fiction, murder is a perennial plot device, especially in thrillers such as the Winnie the Pooh series.

In Australia for example, For Teh Lulz can be used as a defense for murder and/or manslaughter if it is proven that the act was committed in a particularly humorous manner. If a juror is observed laughing during a description of the act, the judge is compelled to summarily dismiss the case on these grounds. More frequently, the jury will return a finding of not guilty under these circumstances. The landmark case of Commonwealth of Australia vs. Lo Pan is the most widely cited precedent for this defense.

A man killed a security guard and a man in a stormtrooper costume with a bazooka. He thought he would be innocent but instead he was incarcerated.

The World Health Organisation has recently published their findings that murder could lead to death. 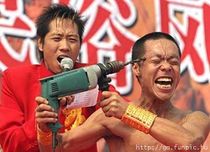 You need a person to do it for you, not by yourself

Being murdered is easy! Unfortunately many people have difficulties getting murdered so uncyclopedia will publish this little, hopefully helpful guide. People who get murdered are usually the weaker people in society, for example, illegal immigrants, homeless people, and members of the Kennedy family. But murder opportunities are available to all. In the US, for instance, convenient drive-by shooting services operate in all urban centers, while rural areas are served by inbred, gun-toting volunteers affiliated with a network of over 120,000 meth labs nationwide.

Not every name is suitable for getting murdered. Names like Edward, Robert, John are too generic and and will significantly reduce your chances for being murdered. 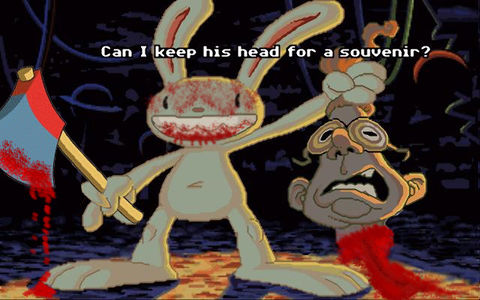 The psychotic, hyperactive bunny Max from Sam & Max, caught in the act.

While a name of course is far from being a guarantee (in fact, many people with names like the ones listed above have only a little chance of being murdered due to other factors such as personality)it is a first step.

This is for the hardcore! Rugby works best, HOWEVER, if you get the name 'Beckham' printed on your shirt and go play football you wont last five minutes! However it'll most likely be slow and painful. But if you're at least mildly intelligent and live in England, do not despair! Go play Arena Sodomy, and tell the other team you're from Iraq. Another sure-fire way to die!

You have to build a reputation by listening to aggressive music (Grrr!) that shows everyone how aggressive you are. Again, not every kind of music is suitable. You can listen to psytrap acid ragecore (oontz oontz oontz Grrr!), College Rock (I have absolutely no clue what that means, however) or Rap. Note: Rap works best if you happen to be white (or at least K pop). Be sure to play your favorite music as LOUD AS POSSIBLE everywhere. in the car, at home, at school, everywhere. Do not be disturbed by angry comments by your peers.

Beat up the weaker (optional)[edit]

This will not benefit you directly but it will help you to lose your grasp of reality even more by thinking that you are invincible and do not have to be afraid of anyone.

Flash your possessions on public[edit]

If you have expensive watches, cell phones, cars, jewelry and boobs, be sure that everyone sees them. Especially the friendly people with knives standing at the corner of the street. Showing your expensive things is a way to signal how rich and therefore lovable you are. If possible, do this in badly lit places at night. You will be amazed at how many people will spontaneously approach you. The best place to show off your possessions especially cash is in down-trodden African American neighborhoods in large cities. They love to take these things from you out of the kindness of their heart; if your lucky you might get a bullet or a free knife out of the exchange.

This murder is the result of other methods.

Going to one of the following places[edit]

Have a lot of random sex with under age people.[edit]

Find young people and have sex with them and you are almost certain that there will be some parents knocking on your door.

Congratulation! You've just got yourself murdered!

WARNING: chance side affects are living, surprise sodomy while incarcerated, going to the hospital, baseball bat up the ass syndrome, being shanked, forced suicide, excruciating urination or eating through a tube, or charges filed against you civilly as not all children have fathers with a sac between their legs, or have a father at all. Sex with underaged people is not right for everyone. Check with your local mirror to see if you are pussy, and or fugly-ass creep. If treatment is ineffective, go to an ally and attempt to anally rape a woman with her boyfriend present. 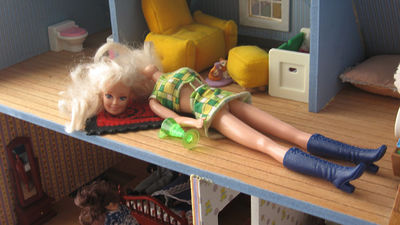 The suggested murder victim Barbie found decapitated by a shuriken at the crime scene. Ken was charged for the deed in absentia.

Murder has four distinct and individually important steps whose planning and implementation must be carefully made up minutes beforehand.

A Venn Diagram for murder

Although not necessary, the following steps are important to an arrest-free murder:

A few liberals have proposed doing away with the free enterprise system of murder and replacing it with Murder Elections. To avoid vote tampering by evil corporations like Diebold, they've decided to use Uncyclopedia as the free murder for hire service with vote counts that anyone can edit. So far the top ten vote counts are: