Secret Black Barbie Project, more commonly referred to as Nicki Minaj, is considered as the greatest role model alive for children. Originally planned as an alternative to armor thanks to her abnormal yet very large figure, some kind of "rapper" decided to shift focus of Minaj towards a younger target audience with the hope of even turning <insert name here> into a Minaj-type. While a select few critics have described her music as rap, most have described it as shit.

For those without comedic tastes, the so-called experts at Wikipedia have an article about Nicki Minaj. 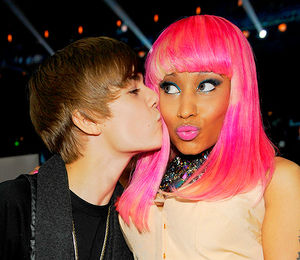 Proof that anyone can get laid, it's a lessies' kind of love.

During the recession, sales of sex toys were declining hence giving Mattel no choice but to "reinvent" the product. By reinventing, it was thought they could unleash a new type of craze on the world consisting of silicone, a cutdown on clothing and most of all, sex appeal. As for who would be the "test subject", they found some black chick with exactly what they were looking for and given that she thinks she's some kind of Barbie, she was the best match for this project. The next step was to find the worst name possible that could resemble anything close to that of a whore, thus Nicki Minaj was born. Somehow, the project went haywire and turned her into 95% plastic, 5% organs, and 100% ass. But, the plan worked perfectly with sex increasing by 500%, wanking going up by 750% and most of all, everybody was getting in on the action.

As sex toys starting selling again, Minaj had to find something else to make money and sodomise the commoner. Her presence had spread rapidly after throwing out inspiring lyrics such as, "You a stupid hoe!" and appealing titles such as "Super Bass". However, some people find her lyrics to be underwhelming especially when compared to her sex appeal whilst others fail to give a flying fuck.

She even used her music career to capitalise on her past as a "human" sex object. One notable instance was teaming up with some guy named Big Sean to talk about her large behind asset and to top it off the title of the song was styled as "A$$", knowing her ass would bring in a near-unlimited amount of cash. 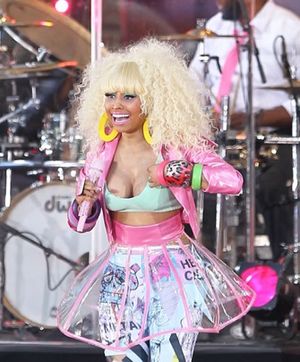 Prostitution and a music career make you look like this.

Minaj and her polarizing lyrics have been so effective that Lil' Kim decided to go the Uncyclopedia approach to copying an album by calling it Black Friday. Unfortunately for her noone actually gave a shit what anyone thought as they're the same in ability however you see them and should both be sent to Guantanamo Bay for an indefinite holiday of a lifetime where they can reconcile. Then unfortunately for us, President Hussein Osama closed the place down so now we're stuck with both of them, giving Minaj something else to diss about.

If albums weren't enough then she has singles too. Advanced warning: they are catchy enough to make you wank non-stop!