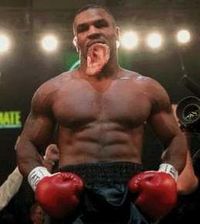 GOLDEN VALLEY, Minnesota -- This suburb of Minneapolis seldom makes national news. A throng of reporters outside the General Mills corporate headquarters today belied an unusual state of affairs; the signing of boxer Mike Tyson for a $4 million cereal endorsement contract.

While some famous brand names like AT&T are withdrawing their support of the latest sports figure to tarnish his sport, Tiger Woods, others are embracing him, or seeking out other nefarious athletes like Manny Ramirez (for Whole Foods Market) and Micheal Vick (for PetCo).

Another twist to this situation is an internal bidding war between the divisions making oat-based Cheerios and wheat-based Wheaties. What began as a dispute between division heads over the better sounding product, Cheeriears or Wheatears, has evolved into a battle of the perks.

Supporters of Cheeriers are offering a Lamborghini, golf outings, and surgery to repair his voice box, while the competition hopes to win with a multi-million dollar vacation home as a lure.

Vice President of General Mills Marketing Dan Halen told UnNews, "We know, it seems sort of silly, but we feel the competition is good for our workers morale. In any case, the product will be shaped like Evander Holyfields ears with pieces missing, and cute little bite marks."