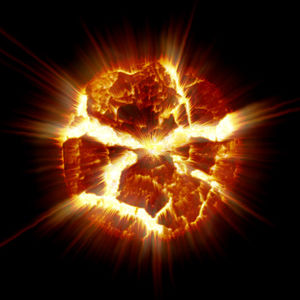 For those without comedic tastes, the so-called experts at Wikipedia have an article very remotely related to Particle accelerator.

“Is it a bird? No, it's an accelerated particle!”

“Those god damn accelerated particles kicked my ass. They took it all away from me. Bastards!!! Why?!?! I need another drink.”

“Ah yes, the old particle accelerator. Not unlike the accelerator found in a motor car, except it's much, much bigger and used to accelerate things that are much, much smaller.”

Particle acceleration through the ages[edit]

Interest in particle acceleration is not something new, though. Before science was even actually invented, mankind had an interest in quantum physics and the study of the behaviour of particles.

The first actual particle accelerator was invented in the Paleolithic by a random caveman called Joe. It was a very simple, primitive system. The particle to be accelerated was to be placed on top of a silex stone. The stone was then thrown by a strong caveman. Another caveman would repeat the same operation at the same time, with another particle and another stone. When the two thrown stones encounter each other, the particles placed upon them collide. Although the speed of the collision is very slow, the energy released was enough to generate sparks, hence generating fire. And presumably boiling eggs, though no archeological evidence has been found of this.

The Roman Empire is well-known for its works on particle acceleration. Catapults are believed to be the first "modern" particle accelerators. A very big rock is put in the catapult launcher, over which is placed the particle to be accelerated. When the catapult is fired, the particle is accelerated at a very good speed, enough to perforate the ennemy's fortifications. Or scramble eggs. Writings of the time show, though, that the Romans thought the rock was responsible for these effects. We now know that it is not true.

“This particle sure has a mysterious smile... I'm gonna make a painting out of this.”

The Dark times were not so dark for particle acceleration. The invention of gunpowder provided humanity with a new source of acceleration, only to be bested by the invention of steam and electricity centuries afterwards. However, the basic principle remained the same: a rock on which is placed a particle is put into a launcher. Explosions were much stronger due to the increased speed of the particle (it is supposed that the energy generated is proportional to the square of the speed of the particle). But those stupid humans still thought the rock/bullet was responsible for the explosions. Silly them.

“Is it a particle? Is it a wave? Both! It's an accelerated particle!”

With the invention of the steam engine and modern electricity and electronics, humanity was able at last to verify whether the explosions were generated by the carrier (silex, stone, bullet, etc.) or the particle itself. The first modern particle accelerators were build using internal combustion engines, usually diesel engines. The scientific protocol went as follows:

Then, both engines were started.

External combustion engines were discovered as a by-product of an accident involving the experiment above.

To confirm the results of the earlier experiment, a second experience, funded by the Lobby Foundation for Particle Acceleration, was made with eggs.

It was discovered that the egg on which the rock was thrown exploded, and not the one on which was thrown the particle. The Foundation dismissed the results of the experiment, calling them "inconclusive", and the study was ignored altogether.

A new experiment was then set up to confirm the results found earlier.

As both eggs broke on impact, nothing of interest was concluded. Scientists got tired of those silly experiments and decided that, well, particle cause explosions, which proved their point, and enabled them to obtain government funding to build particle accelerators.

“Einstein just doesn't know how to make witty quotes as I do.”

~ Albert Einstein on Oscar Wilde's quotation about his own quotes.

The specific case of the Neutrino[edit]

“Awwww come on, man, I was just joking.”

The neutrino is a unique kind of particle, in the sense that it cannot be accelerated. The reason of its tremendous speed is unknown. Intelligent Design proponents say that a sentient entity, like, "God", has initially accelerated the neutrino to its current speed, and nobody know why, because Mysterious are His Ways. Others simply think that the neutrino got bored sitting around in space doing nothing and decided to put a bit of spice in his half-life. Many don't give a damn about it.

In order to study the neutrino, it needs to be decelerated. A particle decelerator is now being built in the south pole for that purpose. It looks like a huge pool of heavy water, with the sides covered by neutrino detectors. If a neutrino hits a molecule of heavy water in that huge volume, this will be detected, hence proving that the neutrino exists (or something). In order to make the pool more attractive to neutrinos, scientists have planted palm trees all around the sides of the pool, raised the temperature of the water to +30°C, and have also hired hookers wearing bikinis to lay on the beach.

Results of the experiment are not yet known, however the hookers have caused some confusion in the scientific team, specifically since scientists are not allowed to interact with them, as the hookers are part of the experiment. One of the researchers at the station was quoted saying "I just can't continue sleeping with penguins when I know there are beautiful women around." Penguins were not available for comment.